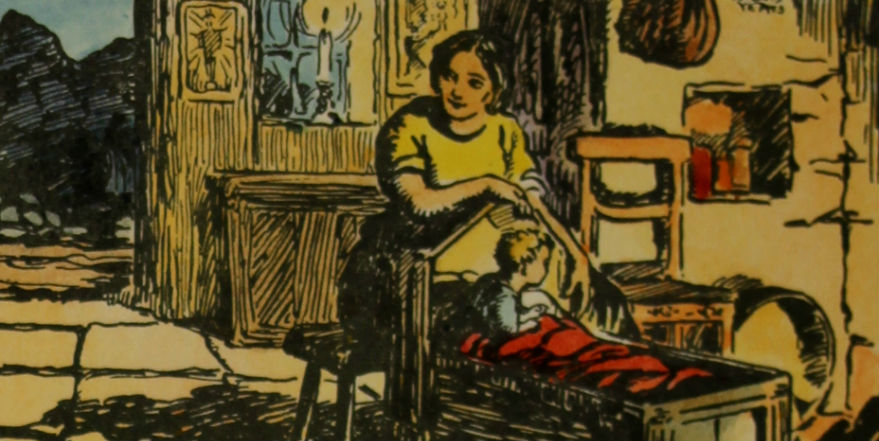 DIB entries of the day: Lollie and Lily Yeats

As part of the current RIA lunchtime series ‘Sisters’, Dr Lucy Collins delivered her lecture '"Who will ever say again that poetry does not pay?": The Yeats Sisters and the Cuala Press ' at Academy House.

To accompany that event here are the Dictionary of Irish Biography’s entries on the sisters Elizabeth (Lollie) and Susan (Lily) by Nicholas Allen.

The 'Sisters' lecture series celebrates the lives and achievements of five families of sisters who have made their mark on Irish life, and continues throughout April.

Elizabeth Corbet (‘Lollie’) Yeats (1868–1940), publisher and painter, was born 11 March 1868 at 23 Fitzroy Road, London, daughter of John Butler Yeats, painter, and Susan Yeats (née Pollexfen). She stayed in Merville, Sligo, at the home of her grandfather William Pollexfen, from July 1872 till November 1874, when her family moved to 14 Edith Villas, West Kensington, London. She and her siblings, William Butler Yeats, Jack Yeats, and Susan Yeats, were in the care of a governess, Martha Jowitt, for three years from 1876 and moved to a larger house in Bedford Park, Chiswick, in 1878. Settled in Howth, Co. Dublin (1881), she was enrolled with Susan Yeats in Dublin's Metropolitan School of Art in 1883 and took classes at the RDS. She started to write fiction when the family moved (1886) to Eardley Crescent, South Kensington, London, and published a home-made magazine, The Pleiades, with six friends, contributing ‘Story without a plot’ to the Christmas 1888 issue. She also published ‘Scamp and three friends’ in The Vegetarian. Resident throughout the 1890s in London at 3 Blenheim Road, Bedford Park, she trained as a kindergarten teacher at the Froebel College in Bedford (Bedfordshire), taking teaching practice at the Bedford Park High School. On finishing training (1892), she taught as a visiting art mistress at the Froebel Society, Chiswick High School, and the Central Foundation School. She earned a good income from her lectures and the publication of four popular painting manuals: Brushwork (1896), Brushwork studies of flowers, fruits and animals (1898), Brushwork copy book (1899), and Elementary brushwork studies (1900).

She returned to Ireland in 1902 to set up the Dun Emer Guild with Susan Yeats and Evelyn Gleeson. Working from a house that Gleeson bought for the project, she ran the guild's printing division with a press acquired from a provincial newspaper. Printing began in 1903 and Dun Emer's first book was W. B. Yeats's In the seven woods (1903). She was a gifted printer, but her costings were not always suitable to the quality of work that she produced, with the result that the press (like the guild) was often in financial jeopardy. Eleven books appeared under the Dun Emer imprint, produced from a first-floor room decorated with pastels by George Russell. She clashed with her brother William over his directions as literary editor, and disliked Evelyn Gleeson. She travelled to New York to advertise her products in October 1906 but returned in late November and published Dun Emer's last book, William's Discoveries (1907). She and Susan separated from the Dun Emer Guild to form the Cuala Industries in 1908; Elizabeth controlled the press while her sister ran the embroidery section. Cuala continued to be a family strain throughout its existence, and John Butler Yeats had to reprimand his son William for sending obnoxious letters to his sisters on the subject. But it produced magnificent books: W. B. Yeats's The green helmet and other poems (1910) and a series of Broadsides (published 1908–15, with illustrations from Jack Yeats). Suffering ill health in 1910, she stayed in Belfast for two summers (1911, 1912) with Olga Heyn. Initially a moderate nationalist, she became sympathetic to republicanism after the 1916 Easter rising, publishing Thomas MacDonagh's last and inspiring address (1917). With Susan, she was made member of the library committee of the Sinn Féin run Dundrum rural council in 1920. A good saleswoman, she had important patrons in the Aberdeen and Cadbury families.

Depressed at the death of her father (February 1922), she moved the Cuala press to the basement of W. B. Yeats's house at 82 Merrion Square in 1923. In February 1925 Cuala Industries moved to 133 Lower Baggot St., Dublin, where it remained till her death. Notable works published included W. B. Yeats's The bounty of Sweden (1925), and The wild bird's nest (1935) by Frank O'Connor. Suffering from high blood-pressure throughout the 1930s, she had financial trouble in 1938 as the shares in her possession that covered Cuala's bank overdraft greatly lost value. She had complained of chest pains and light-headedness for years; these were misdiagnosed as neurasthenia in 1916. Treated for angina in 1938, she died of heart failure on 16 January 1940 in a Dublin nursing home. She is buried with her sister Susan in the Old Churchyard, Churchtown, Dublin.

Susan Mary (‘Lily’) Yeats (1866–1949), embroiderer and designer, was born 25 August 1866 at Enniscrone, Co. Sligo, daughter of John Butler Yeats, painter, and Susan Yeats (née Pollexfen). A sickly child, she stayed in Merville, Sligo, at the home of her grandfather William Pollexfen from July 1872 until November 1874, when her family moved to 14 Edith Villas, West Kensington, London. She and her siblings, William Butler Yeats, Jack Yeats, and Elizabeth Yeats, were in the care of a governess, Martha Jowitt, for three years from 1876 and moved to a larger house in Bedford Park, Chiswick, in 1878, where she briefly attended Notting Hill school. Settled in Howth, Co. Dublin (1881), she was enrolled with her sister Elizabeth in Dublin's Metropolitan School of Art in 1883 and took classes at the RDS. When the family moved (1886) to Eardley Crescent, South Kensington, London, she became ill and was sent to her relatives, living eventually at Huddersfield in 1887 in company of her aunt Elizabeth and her mother, who had just suffered a stroke. She returned to the family at 3 Blenheim Road, Bedford Park, in 1888. In autumn that year she took French classes and became an assistant embroiderer under May Morris at Kelmscott House, home of William Morris. She worked there until April 1894. Leaving due to ill health, she worked briefly as a governess at Hyère in the south of France before contracting typhoid, returning to London in December 1896. Susan Mitchell lodged with the Yeats family from late 1897, and the two became close friends.

She moved to Dublin to live at Gurteen Dhas with her father and sister in 1902, and founded the Dun Emer Guild with Elizabeth Yeats and Evelyn Gleeson in 1903. Susan was responsible for embroidery; her major commission was the banners and vestments to adorn Loughrea cathedral. A skilful designer, she published an example of her work, ‘Fish and lotus’, in the Art Journal of 1906. Travelling to New York with her father in December 1907 to exhibit Dun Emer goods at the Irish Industrial Exhibition, she remained until June 1908, unable to persuade her father to come home. Her return to Ireland coincided with her and Elizabeth's split from the Dun Emer Guild to form Cuala Industries, where she was again responsible for embroidery, winning three prizes for her handiwork at the exhibition that accompanied the 1909 RDS horse show. She became close to her ward Ruth Pollexfen, daughter of her uncle Fred Pollexfen, and Ruth stayed with the Yeats sisters until Ruth's marriage to Charles Lane Poole in July 1911. Living frugally throughout the first world war, Susan helped Maud Gonne to find a new Dublin residence in 1918, and held a party with her sister to celebrate the birth of Anne Yeats in April 1919. Repeatedly ill from overwork, she was present when Free State troops raided Cuala Industries in May 1923 to arrest two young female employees. Permanently short of money, she made her way by occasional sales and commissions. Seriously ill in 1923, she was threatened by a tubercular lung and taken to a London clinic for treatment, from where she travelled to Calvados in France to recuperate, not returning to Dublin until 1925. Her involvement with Cuala diminished with her health; after her collapse in April 1931, the embroidery section was closed (January 1932) with W. B. Yeats paying off debts.

Living a secluded life throughout the late 1930s, she wrote a tribute to her sister that was published by the Cuala Press after Elizabeth's death in January 1940. Evidence of their intimate distance, the tribute suggests an affectionate disregard, a condition explained by their living together since 1902. By March 1941 X-rays established that her ill health was due to abnormal thyroid growth. Cuala Industries moved (1 January 1942) to the residence of George Yeats at 46 Palmerston Road, Dublin, but she continued to collect family history in scrapbooks of information. She also painted. She died on 5 January 1949 at home, and is buried with Elizabeth at the Old Churchyard, Churchtown, Dublin.