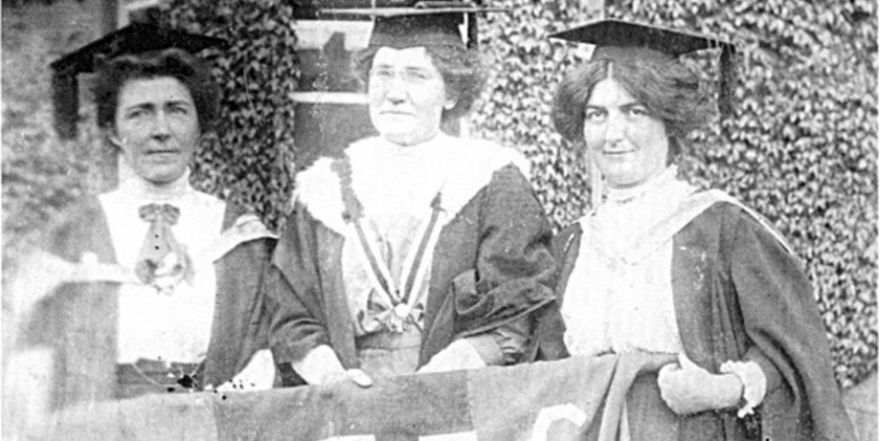 The lecture series celebrates the lives and achievements of five families of sisters who have made their mark on Irish life, and continues throughout April.

Hanna (Johanna) Sheehy Skeffington (1877–1946), political activist, was born 24 May 1877 in Kanturk, Co. Cork, eldest among two sons and four daughters of David Sheehy, millowner and later nationalist MP, and Elizabeth (‘Bessie’) Sheehy (née McCoy), both of Co. Limerick. The family, having lived in Co. Cork and Co. Tipperary, moved to Dublin in 1887. Hanna was educated at the Dominican Convent, Eccles Street, Dublin, where she won a number of prizes and exhibitions and showed a flair for languages. The threat of incipient tuberculosis in 1895 interrupted her studies and she travelled to France and Germany as a strategy for recovery. Later that year she won a scholarship to St Mary's University College, run by the Dominican order, and in 1899 graduated from the Royal University of Ireland with an honours BA in modern languages. She was awarded an MA in 1902. After graduation Hanna was employed on a part-time basis with the Dominicans in Eccles Street.

Hanna met her future husband Francis (‘Frank’) Skeffington, the only child of Joseph Bartholomew Skeffington, inspector in the national schools system, and Rose Skeffington, in 1896. When the couple married in 1903 they took each other's surnames as a symbol of the equality of their relationship. While Hanna was politically aware and had been one of the founders of the Women Graduates’ and Candidate Graduates' Association (1902), established to promote the advancement of women in university education, she claimed that it was Frank who was responsible for her ardent commitment to the women's movement. Their son, and only child, Owen, was born in 1908. The couple were committed to many causes, particularly feminism, pacifism, socialism and nationalism.

In 1902 Hanna joined the long-established Irishwomen's Suffrage and Local Government Association, which campaigned for women's access to the franchise through the genteel methods of lobbying politicians and holding meetings. The formation in London in 1903 of the militant suffrage organisation, the Women's Social and Political Union, revitalised the suffrage campaign. Hanna was aware of the activities of the WSPU and in 1908, with Gretta (Margaret) Cousins and two other women, organised the Irish Women's Franchise League (IWFL), an independent, non-aligned and militant group. By 1912 the IWFL claimed a membership of over 1,000, making it the largest suffrage group in Ireland. Hanna was a strong nationalist but did not join either Inghinidhe na hÉireann on its formation in 1900 or Cumann na mBan in 1914. She believed that women involved in nationalist organisations played a subordinate role to men (an issue much debated in the period), and that it was only through the acquisition of the vote that true citizenship would be attained.

In May 1912 the first issue of the suffrage paper the Irish Citizen, edited by Frank Sheehy Skeffington and James Cousins, appeared. When the Cousinses left for India in 1913, the Sheehy Skeffingtons took over the management of the paper, and after Frank's murder in 1916 Hanna edited the paper, intermittently, until 1920. The socialist thought of James Connolly greatly influenced her thinking and she assisted in Liberty Hall during the 1913 Dublin lock-out. The failure of the Irish parliamentary party to support women's suffrage led to the first militant suffrage activity in Ireland. On 13 June 1912 a number of women of the IWFL, including Hanna, broke some windows in government buildings. The women were arrested and imprisoned for a month. In prison they immediately and successfully lobbied for political status. The treatment of two English suffragettes by the Irish authorities led Hanna and a number of other suffragettes to go on hunger strike, a strategy they were to continue whenever they were imprisoned. Because of her feminist activities Hanna was sacked from her German teaching post at the Rathmines School of Commerce. She now devoted more time to suffrage and to her work on the Irish Citizen, corresponding with suffragists in England and the United States. Hanna and Frank took a strong pacifist position in relation to the growing militarism of the time. On the outbreak of the 1916 rising Frank was involved in organising anti-looting bands. He was arrested and shot without trial on the orders of Capt. J. C. Bowen-Colthurst, a British army officer. Hanna was thrown into personal and emotional turmoil by that event. An inquiry into the murder left too many questions unanswered for her satisfaction. She refused all offers of compensation from the government and decided to bring the facts of the case before the American public. At the invitation of the friends of Irish Freedom, Hanna toured the USA from October 1916 to August 1918, speaking at over 250 meetings; this was the first of four American tours. Her major speech from her first tour, British militarism as I have known it, was published in New York in pamphlet form in 1917.

Following the achievement of women’s suffrage in 1918, Hanna stood and was elected as a Sinn Féin candidate to Dublin corporation in late 1919, and when a truce in the ongoing war of independence was declared in July 1921 she was the director of organisation for Sinn Féin. She was also on the executive committee of the Irish White Cross, a relief organisation funded by the American Committee for Relief in Ireland. She opposed the Anglo–Irish treaty and in 1922–3 accompanied Linda Kearns (Linda MacWhinney) and Kathleen Boland to the USA on a fundraising trip for the relief of the families of Irish republican soldiers held as prisoners in the Irish Free State. Hanna was also a member of the Prisoners' Defence Association and helped form the Women Prisoners' Defence League in 1922. In August 1923 she was sent to Paris by Éamon de Valera, in an unsuccessful attempt to put the case to the League of Nations against the recognition of the Irish Free State.

Hanna was also a member of the Women's International League for Peace and Freedom, a pacifist organisation, of which she later became a vice-president. In May 1926 she was one of four women appointed to the executive of the new Fianna Fáil party. But when de Valera entered the dáil she split with the party. While she was politically disturbed by the nature of Irish government during the 1920s and 1930s, she remained an active feminist. During these years she supported herself and Owen though her journalism, writing extensively for the Irish World, and gave many public talks and lectures. In 1926 she led protests against the staging of Sean O'Casey's The plough and the stars at the Abbey theatre, claiming that it derided the men and women who had taken part in the 1916 rising.

In August 1930 Hanna went as a delegate of the Friends of Soviet Russia to study the Soviet system of government and, like many of her contemporaries, she remained an active sympathiser with the communist system. She contributed to, and later became assistant editor of, An Phoblacht and its successor Republican File. In January 1933 she was arrested and imprisoned after a public speech in Newry, having defied an exclusion order that had been imposed on her by the Northern Ireland government. She opposed the 1937 constitution and, through the Women Graduates' Association, campaigned publicly against its provisions. In November 1937, as a consequence of misgivings about the new constitution, Hanna was instrumental in establishing the Women's Social and Progressive League as a women's political party that declared itself to be non-sectarian and non-party. She stood unsuccessfully as a candidate for the party in the 1943 general election. Her health deteriorated in 1945 and she died of heart failure on 20 April 1946 and was buried beside her husband Frank in Glasnevin cemetery in Dublin.

The most extensive collection of papers, including photographs, relevant to Hanna Sheehy Skeffington is to be found in the Sheehy Skeffington papers housed in the NLI. There is some correspondence from her, dating from 1926, in the Fianna Fáil party archives, Dublin. Her correspondence with Alice Parks is in the Alice Parks collection, box no. 19, Hoover Institution Archives, Stanford, California.