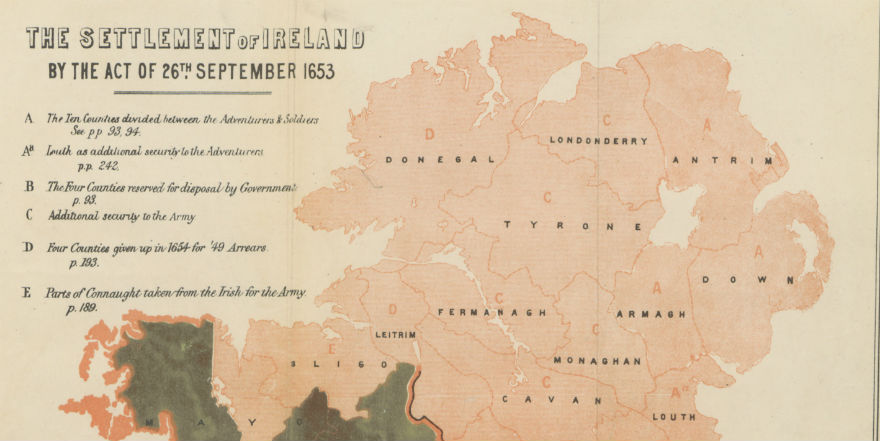 John Patrick Prendergast, author of The Cromwellian settlement of Ireland (1863), supported the publication of Haliday's Scandinavian kingdom of Dublin (1882), and recorded details of Haliday's life for posterity.

'Dublin Documents', a Library exhibition highlighting items from the Haliday collection, will run from 9 January to 5 May 2017.

To celebrate the benefactor of this remarkable manuscript collection read the entry on John Patrick Prendergast, friend and chronicler of Haliday, from the Dictionary of Irish Biography, by C. J. Woods, below.

Prendergast, John Patrick (1808–94), barrister, land agent, and historian, was born 7 March 1808 at 37 Dawson St., Dublin, a son of Francis Prendergast (1768–1846) and his wife Esther (née Patrick). The Prendergasts could trace their ancestry to medieval times; Francis Prendergast's grandfather, Thomas Prendergast (d. 1756?), an attorney at Clonmel, Co. Tipperary, was killed in a duel during an election contest; his father, also Thomas (d. 1820), was registrar of the court of chancery; he himself married twice, his first wife, Maria, a sister of Thomas Reynolds (qv), bearing him three children, Esther bearing him seven. Esther's father, John Patrick (after whom the future historian was named), came from either Londonderry or Coleraine; her mother's family were presbyterians named Weld, some of whom lived in Camden St., Dublin, and from whom he learnt of the rebellion of 1798. John Patrick Prendergast attended a grammar school at Reading, Berkshire (from 1818), before entering TCD (1824). He graduated BA (1828), was called to the Irish bar (1830) and for the next 20 years or so practised on the Leinster circuit. In 1836 he succeeded his father as land agent to Lord Clifden, which brought him a knowledge of agrarian issues making him an advocate of tenant-right, as evidenced by his Letter to the earl of Bantry, or a warning to English purchasers (1854).

He acquired a reputation as an historian with The Cromwellian settlement of Ireland (1863; 2nd ed., 1875), one of the first attempts to write Irish history based on detailed and wide-ranging work in the archives. His research, which began in 1846 as an investigation of family history, covered state papers at Dublin Castle, Ormond papers at Kilkenny Castle and Charlemont papers in Dublin as well as taking Prendergast to the British Museum and the Bodleian Library, Oxford. After its publication he was appointed (1864) by the master of the rolls to calendar and select for transcription the Carte papers in the Bodleian, in collaboration with Matthew Russell (qv), a Jesuit priest; they published a report in 1871 and continued the work until 1880. Prendergast brought out privately a pamphlet, The tory war in Ulster (1868), and expanded it into a full-length book, Ireland from the Restoration to the Revolution (1887), which however ends in 1683. He contributed papers to the Kilkenny Archaeological Society Journal (1851–86), published articles on family history and a refutation of J. A. Froude (qv) in the Nation (1872–4). A friend of Charles Haliday (qv), he seems to have brought about the posthumous publication of Haliday's Scandinavian kingdom of Dublin (1882), himself contributing a long notice of Haliday. He was a friend too of Philip Henry Bagenal (qv), with whom he regularly corresponded during his last 20 years.

In his politics Prendergast was a whig or liberal. If he was ‘Mr Pointdergast’, the Dublin lawyer whom Alexis de Tocqueville met in Kilkenny on 25 July 1835, he was then decidedly mistrustful of catholics, particularly of the catholic clergy (‘to a high degree a domineering body’), whilst admitting to hardly ever meeting catholics socially. If in middle age he was inclined towards Irish nationalism, he turned away after the rise of the home-rule movement under Isaac Butt (qv) and Charles Stewart Parnell (qv). John P. Prendergast died 6 February 1894. He married (September 1838) Caroline Ensor (1806?–75), second daughter of George Ensor (qv) of Ardress, Loughgall, Co. Armagh; the couple lived at Hume St., Dublin, until 1851, when they moved to 3 Tower Terrace, Sandymount; they had only one child, Francis Ensor Prendergast (1841–97), who graduated in engineering at TCD (1863), went to America (1868) and acquired citrus plantations in California. The library of King's Inns, Dublin, holds Prendergast's papers, which include materials (seen by Finegan) for an autobiography, notes on his family history and six volumes of letters he wrote to Bagenal (1873–93).