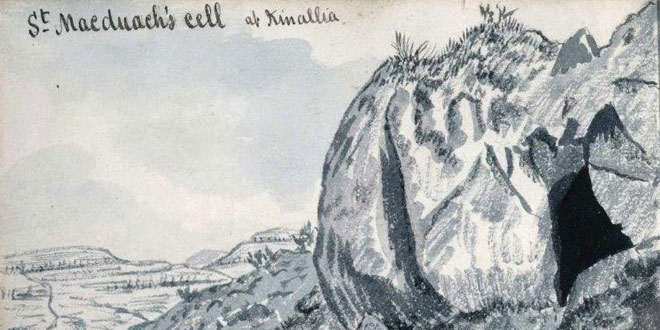 Dr Charles Dillon of the Academy’s Foclóir Stairiúil na Gaeilge considers hermits, hermitage and the lonely life as manifested in Irish literature and language over the centuries.

Our modern Irish word díthreabhach, ‘hermit’, has its origins in the early Irish treb ‘household or tribe’ where the compound dí + treb denoted a place away from the dwellings and habitations of others. Voluntary seclusion was of course common in the religious life, and many places where solitude or retreat from the world was sought made their way into our placenames, such as at Coill an Díthreabha (the wood of the solitary place, or Killadeer) near Ballintubber in Co. Mayo. Common also was the element díseart, from Latin desertus, and again there is evidence for this in placenames throughout Ireland. A díthrubach, then, was one who spent time in solitude, away from others, and our literature makes frequent reference to the practice of seeking out such solitude to be closer to God.

A good example of this in Mánas Ó Domhnaill’s Betha Colaim Chille (Life of Colum Cille), completed in 1532, tells of Cormac Ua Liatháin of Durrow, who came with Colum Cille to Scotland, but who then wished to depart: do tindscain … iar sin a dul ar fasach no a n-inadh rouaicnech a mbeith se ag denamh crabuidh gó a bás ‘he purposed to go into a wilderness or solitary place where he might live in piety till his death’.

It is no surprise to find frequent mention of hermits in the voluminous religious literature of Counter-Reformation Ireland in the seventeenth century, and in the Franciscan Antoin Gearnon’s 1645 work Parrthas an Anma (The Paradise of the Soul), written in Louvain, the author gives a version of Liottáin na Naomh (The Litany of Saints) which includes the line A uile naomhmancha agus díthreabhacha, guidhidh orainn ‘every saint and hermit, pray for us’.

It is clear by the early eighteenth century, however, that in the vernacular the concept díthreabh/díthreabhach was beginning to take on further connotations of meaning to do with poverty, rejection, exile and destitution. The poet Cathal Buí Mac Giolla Ghunna, who is associated with the Cavan/Fermanagh region in the period, wrote complaining of his lodgings which he sarcastically called ‘An Caisleán Cam’:

‘better for me to have a sword pierce my left side
to be left for dead in a state of unconsciousness
than to lie here as a ‘hermit’ among the people,
trembling all night in this Caisleán Cam.’

Disagreements and disputes were a frequent occurrence in eighteenth-century Ireland among poets who were fond of elaborate wordplay and one-upmanship. Ránall Mac Dónaill, a poet who operated in the Louth/Armagh region, took great umbrage at Brian Mac Cuagáin, a poet of Meath who had criticised the northern province and its poets. Towards the end of a 100-line retaliatory ‘take-down’ of the Meathman, we find the following by Mac Dónaill:

‘May your hair and nails soon fall out,
May the wild wind and the fairy hosts carry you
with them, away from us, to the edge of a wilderness’

This connotation of díthreabhach as not only a hermit, but one who is miserable or destitute was sufficiently embedded in the vernacular for Dinneen to include it in his entry for the word in his dictionary compiled in the early twentieth century, which includes the sense ‘a puny child, chicken, etc.’ in a typically effective use of ‘etc.’ to round off a definition. He makes mention too of the Ulster dialectal form díorfach (which we have encountered in the quotations above) but also dírthreoch and díthreoch – this latter we find in Seóirse Mac Clúin’s 1922 collection of Gaeltacht speech Réilthíní Óir (completed with the aid of Tomás Ó Criomhthain of the Great Blasket island) with a further meaning noted:

‘it is a poor ‘díthreóch’ of a child whose mother or father are no longer living: a poor child with no-one to care for him. Also called a ‘díthreóch’ is the lamb which is rejected by its mother, and so on’

The west-Kerry writer Seán Óg Caomhánach (Seán a’ Chóta) expands this meaning further in Croidhe Cainnte Chiarraighe, his collection of speech from his native Gaeltacht, compiled between 1937 and 1942. In a long explanation of díthreabhach (díthreóch), he offers ‘aindeiseoir, duine ar an bhfán nó n-a aonair de dheascaibh cailleamhna a mhuinntire nó a chairde; truaghán’ as definitions, which might be translated as ‘a miserable person, one who is wandering or alone having lost his relations and friends; a wretch’. Máirtín Ó Cadhain, for his part, in his collection of speech in Conamara from the same period, illustrates his unparalleled range of vocabulary in glossing díthreabhach with a comprehensive description of its meanings (and for which my poor attempt at a translation to English must suffice):

‘someone who can only sit by the fire, a pitiful type; a puny unfortunate person; a little article; someone wasted away; a tiny creature; a person or animal stricken by ill-fortune, by cold, by illness or other; a person, animal or thing without substance; a shrunken thing; an orphan or a person left in a bad state (the old meaning – “hermit” – is no longer heard now, as far as I know).

And so Ó Cadhain, in finishing his definition, gives us to believe that the use of the word díthreabhach to denote ‘a hermit’ was not one he had encountered in the vernacular of his own time, but furnishes examples of how it is used in new, figurative ways in a perfect illustration of how words gather and lose meanings over centuries of use.