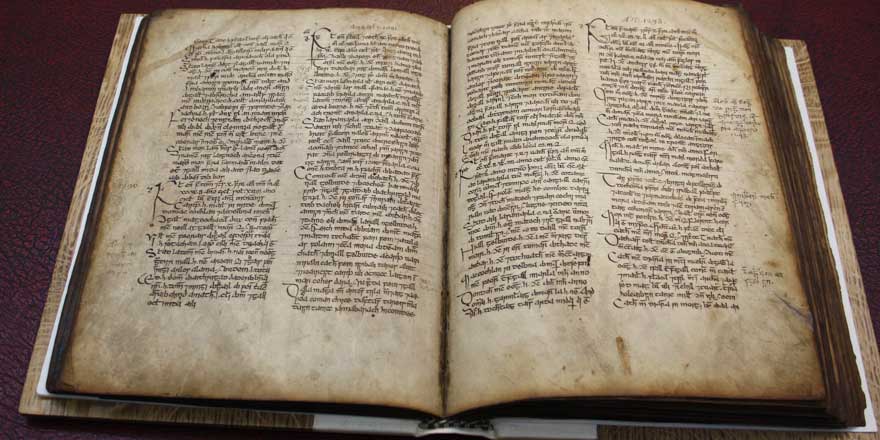 The Annals of Connacht: a unique sixteenth-century manuscript

The surviving sixteenth-century manuscript of the Annals of Connacht is unique; no other contemporary copy of the text survives. The manuscript contains an important chronicle of Irish history extending from AD 1224 to AD 1544.

What are the Annals of Connacht?

The vellum manuscript we now call the Annals of Connacht was written in the mid-sixteenth century. The contents were derived from older annals compiled for the O’Conors of Connacht. The annals contain obituaries of prominent individuals together with an annual record of significant events for some 320 years, from 1224 to 1544, with one later entry for the year 1562. The opening entry is a substantial obituary for Cathal Crobderg O’Conor, who died in 1224.

Gearóid Mac Niocaill, writing in the 1970s, observed that much of the content of the Annals of Connacht seems to derive from a fifteenth-century compilation by a member of the Ó Maoil Chonaire family of professional historians (Mac Niocaill, 1975:32). The principal evidence for this is that the main focus of the Annals of Connacht is on the Gaelic lordships of north Connacht, and particularly on the O’Conors, descendants of the last high king of Ireland. The learned family of Ó Maoil Chonaire were hereditary historians to the O’Conors. Three scribes are responsible for the manusctript but only two identify themselves: Paitin and Sean Riabhach. No surname is given, but they were probably members of the learned family of Ó Duibhgeannáin.

Who owned the Annals of Connacht?

The unique manuscript of the Annals of Connacht (RIA MS C iii 1) has been preserved in the Royal Irish Academy Library since 1883 when it was returned to Ireland with the rest of the Stowe/Ashburnham collection of manuscripts. More than a century earlier, it had been acquired by the antiquarian scholar Charles O’Conor of Ballinagare, County Roscommon, and there are some annotations in his hand from the 1740s. The manuscript is now accompanied by many ancillary notes on the history of the O’Conors in papers that have been preserved alongside the vellum manuscript since the mid-eighteenth century. The eighteenth-century binding includes Charles O’Conor’s bookplate on the inside back cover. 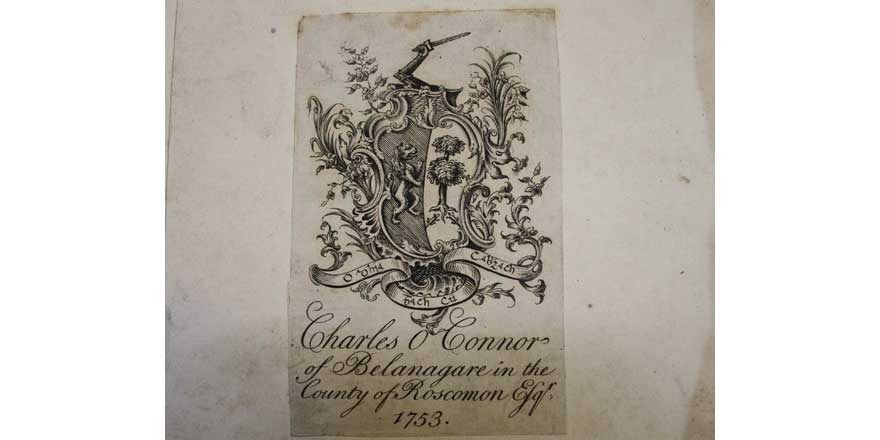 Bookplate of Charles O’Conor from Annals of Connacht (Photo: B. Cunningham)

Before O’Conor acquired the volume, it is known that up to the late 1720s the manuscript was in the hands of the Ó Duibhgeannáin family in north Connacht. On folio 15r there is the signature of ‘Dominick Digginan’ and the date 1727, and the manuscript had probably been in the continuous ownership of that family for almost 200 years.

A decision was taken in 2008 to rebind the manuscript, because the late eighteenth-century binding of the manuscript had become extremely worn and the front and back boards had become detached. 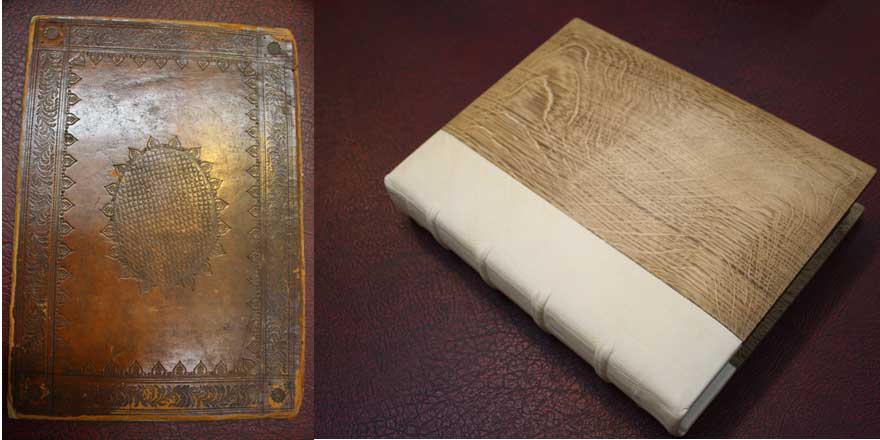 The condition was such that the manuscript could no longer be put on display, and could not be issued to readers because of the risk of loss or damage to disbound parts of the manuscript. It was cleaned, repaired and re-bound by conservator Anthony Cains in 2008-09. It is now bound in Irish oak boards with a white spine made of pig-skin, the vellum leaves carefully resewn into the new binding. 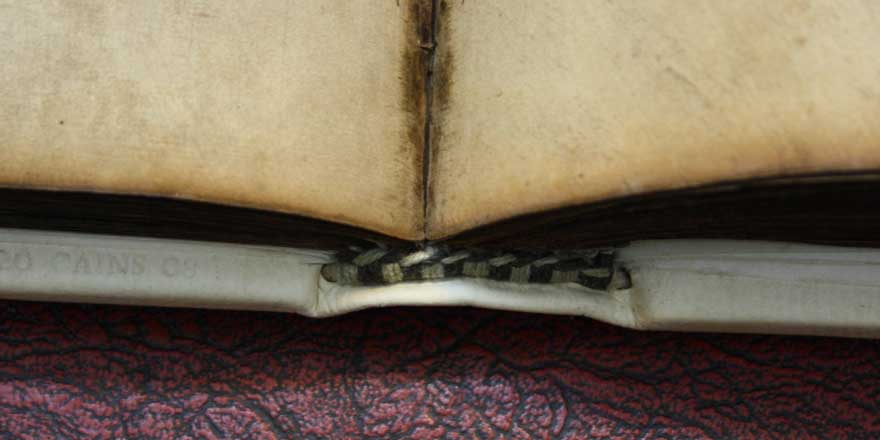 New binding of Annals of Connacht, the work of Anthony Cains, 2008-09 (Photo: B. Cunningham)

This extensive conservation work, funded by a private benefactor, was done with a view to conserving the manuscript as securely as possible for future generations. This kind of major intervention with a medieval manuscript means that certain aspects that might be considered characteristic of the manuscript are modified. In the case of the Annals of Connacht, ancillary papers dating from the seventeenth and eighteenth century that had been inserted into the eighteenth-century binding as part of a repair job at some point in the twentieth century have now been removed. These papers have been cleaned and conserved and are now bound separately from the original vellum manuscript.

These paper accretions preserve clues to the history of the manuscript and its use through the centuries, and need to be preserved and studied. However, just as an historic building of the sixteenth century might be restored to its original form, by peeling away later layers of renovation and redecoration, so it is with a manuscript like the Annals of Connacht, where the form in which it has now been conserved is as close as it can be rendered to the form in which it was first created. The highest possible standards of manuscript conservation have been applied so as to create a binding that will enhance the preservation of the vellum leaves on which the text is written, and to create a robust manuscript that will, we hope, last well into the future. 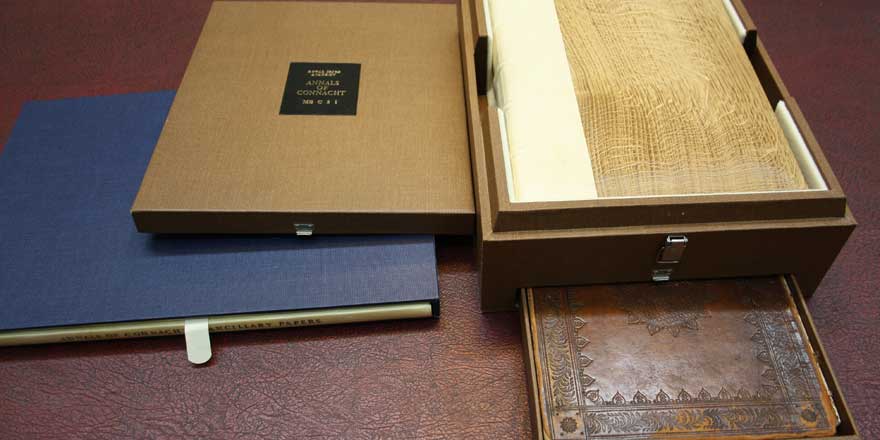 New box and bindings of Annals of Connacht, the work of Anthony Cains (Photo: B. Cunningham)

Now that the manuscript has been restored and is useable again, and has been digitised for the Irish Script on Screen website, not to mention published with a translation and index, there’s really no excuse not to study this important text from sixteenth-century Connacht that preserves so much of the history of the O’Conors and other Connacht families as well as providing evidence of the scholarly endeavours of the professional historians of the O’Duigenans and O Maoilchonaires through the centuries. Any volunteers for the task?

Kathleen Mulchrone’s description of the manuscript was published in Catalogue of Irish Manuscripts in the Royal Irish Academy, Fasc. XXVI (Dublin, 1943), pp 3274-6.

A full transcript of the Irish text, with English translation, is freely available online as part of the Corpus of Electronic Texts. www.ucc.ie/celt

The manuscript (C iii 1) was digitised in 2002 by the Irish Script on Screen project. www.isos.dias.ie