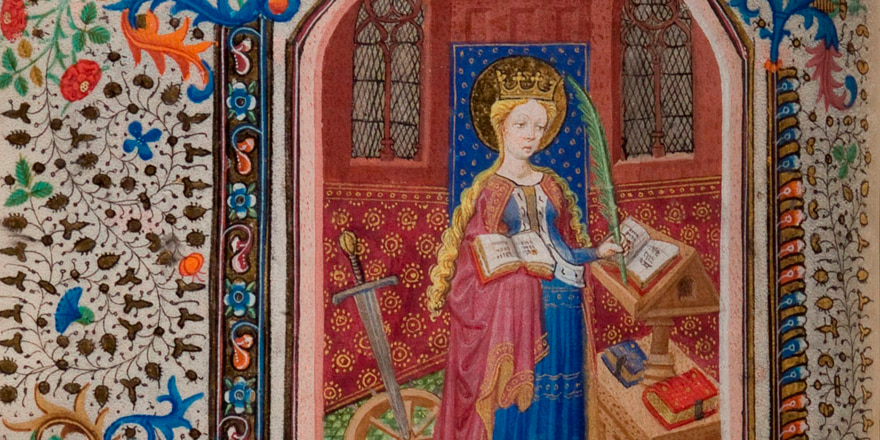 The art of prayer: A codicological analysis of two Academy manuscripts

Latest Library Blog post. A look at two beautiful manuscripts at the end of a very strange year. We wish you all a safe and healthy New Year.

One of the most beautiful treasures in the RIA Library is MS 12 R 31, a highly illuminated medieval Book of Hours, for Sarum Use, produced in Rouen in the mid-15th century. The book features twenty-eight miniatures most of which were produced by the ‘Hoo Master’ with the exception of St Hildevert which was executed by the ‘Talbot Master’. In contrast, MS 12 R 35 is a late 14th century or early 15th century Augustinian missal of Italian provenance with considerably less decoration but with several brightly illustrated initial letters, pen-flourishing and rubrication throughout. These two medieval texts provide an opportunity for codicological analysis and comparison. Codicology is a holistic approach to the study of books and manuscripts and is concerned with describing the book as a physical object or artefact, considering attributes like binding, format, decoration, and illustration. This blog post will provide a brief codicological analysis of two medieval manuscripts in Academy collections. 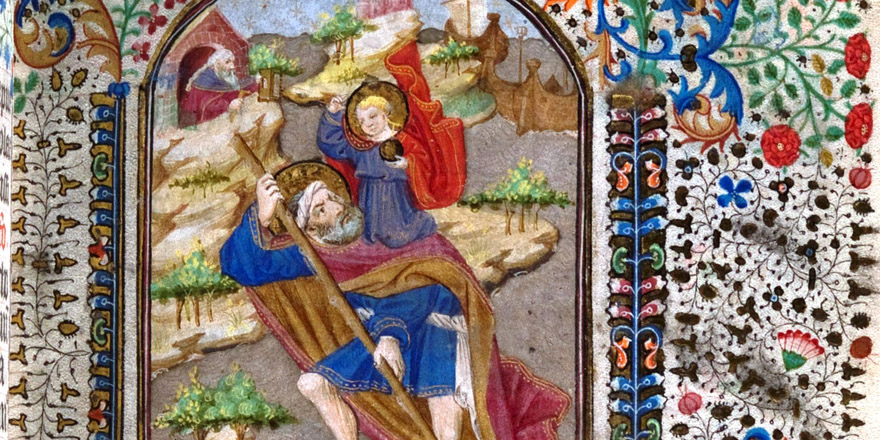 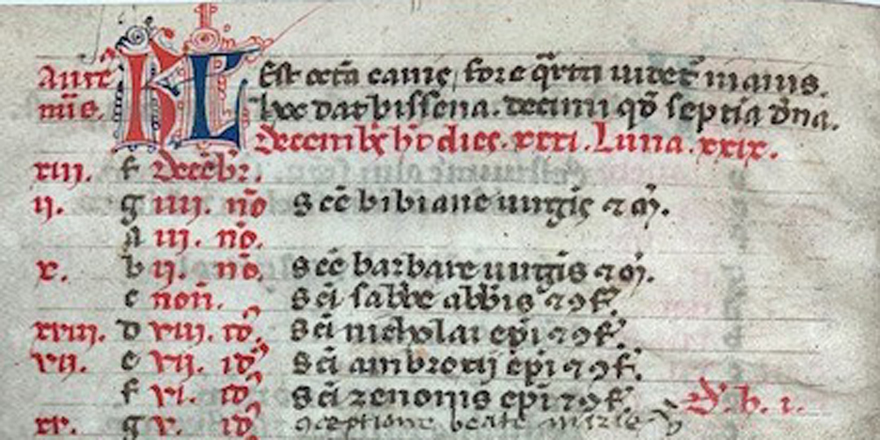 The term ‘never judge a book by its cover’ is certainly apt when it comes to the study of medieval manuscripts, many of which do not survive in their original bindings. This is certainly the case with the manuscripts 12 R 31 and 12 R 35, the former of which is bound in red morroco (possibly goatskin) on four raised bands with extensive blind and gold tooling and red ribbon bookmarks. The binding is likely from the fourth quarter of the sixteenth century, but the curled patterned marbled endpapers were probably added in the eighteenth century. The final parchment leaf exhibits staining caused by the leather turn-ins of a previous binding when it probably acted as a pastedown or inner lining.  In contrast MS 12 R 35 was expertly repaired and rebound by A.G. Cains in 1982 and its 19th century binding was replaced with white tawed sheep skin. 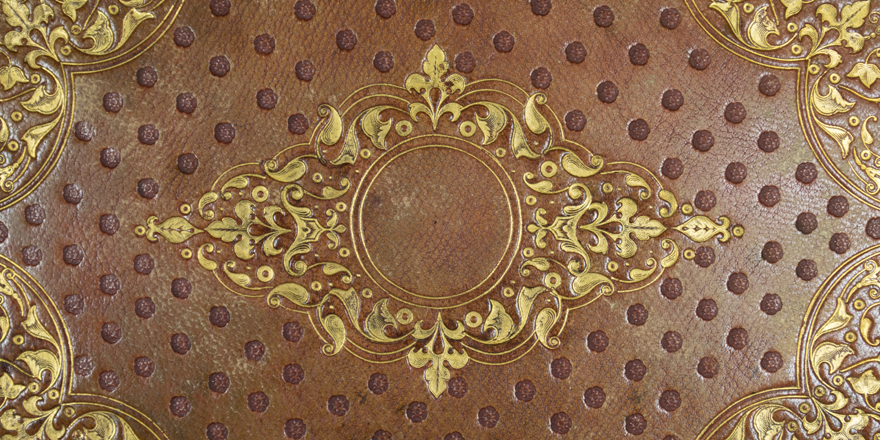 The label on the inside cover of MS 12 R 35, suggests that it once belonged to the great antiquarian S.I. Milligan, MRIA before it was presented to the Academy Library in 1981 by Mrs A. Murnaghan on behalf of her late husband, James A. Murnaghan. MS 12 R 31 was likely commissioned by Thomas, Lord Hoo, Chancellor of Normandy and France, as a wedding present for his bride, Eleanor Welles. Portraits of Lord and Lady Hoo as well as heraldic devices feature in the text. A note on the flyleaf suggests that the manuscript once belonged to the Lindores family in Scotland. It was reputedly inherited by John de la Pole who subsequently gifted it to Mary Queen of Scots. It was presented to the Academy in 1874 by H.A. Forbes. 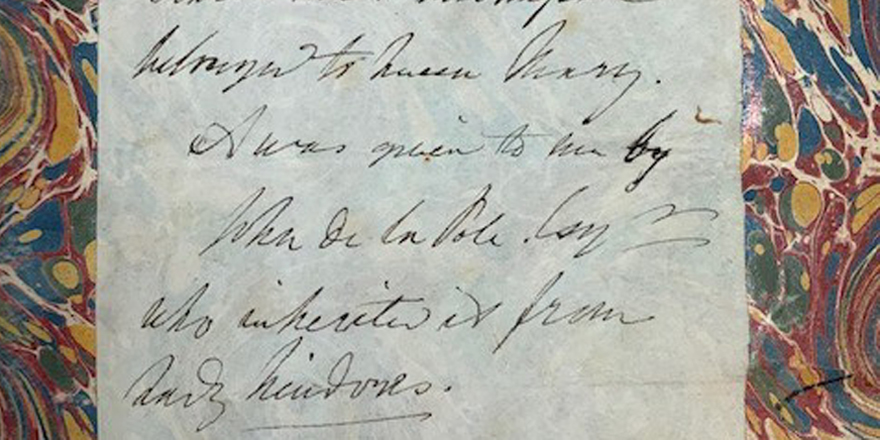 MS 12 R 31 points to a tri-lingual society in which Latin, French, and English were used while MS 12 R 35 is exclusively in Latin. The layout of text, illustrations, and other elements on the page, otherwise known as the mise-en-page, provides a further opportunity to compare these manuscripts. MS 12 R 31 contains text in a single column while MS 12 R 35 has two columns per page. Collation, or the arrangement of quires or gatherings in a codex, can also provide us with clues regarding the text. MS 12 R 35 contains catchwords which help to put the gatherings in sequential order. The quality and condition of the parchment also differs between the manuscripts. The membrane used to produce MS 12 R 35 is of a poorer quality than that of 12 R 31 and exhibits tears repaired through sewing. 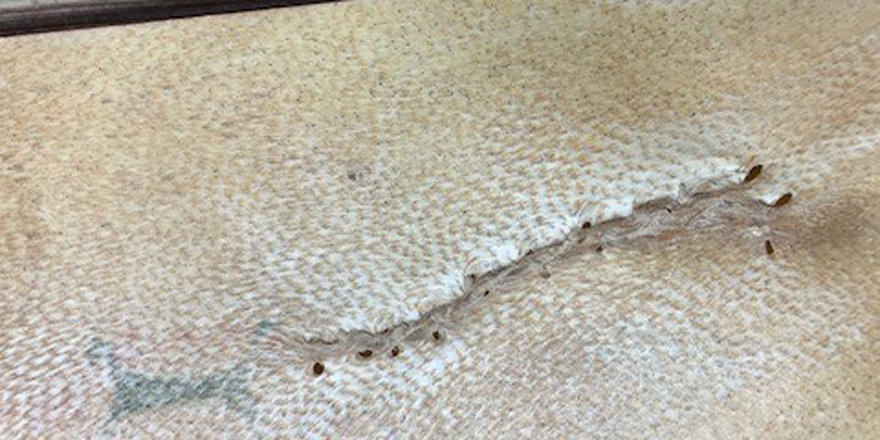 MS 12 R 31 contains twenty-eight illuminated miniatures, each one encased in a gilded frame surrounded by a foliate border often containing strawberries, a symbol of the Virgin Mary. Calendar entries appear in gold, red, and blue and the text is surrounded by a three-sided gold frame throughout. Decorated initial letters serve as text dividers and ornate bars act as line fillers in the text. The pages of MS 12 R 31 have been ruled in red ink and seventeen prick marks in the outer margins have been used to draw sixteen lines of text. The ruling in MS 12 R 35 is perhaps more functional and the pages were lined with lead point, although red ink has been used to underline portions of the text as well as the four stave-lines for musical notation. 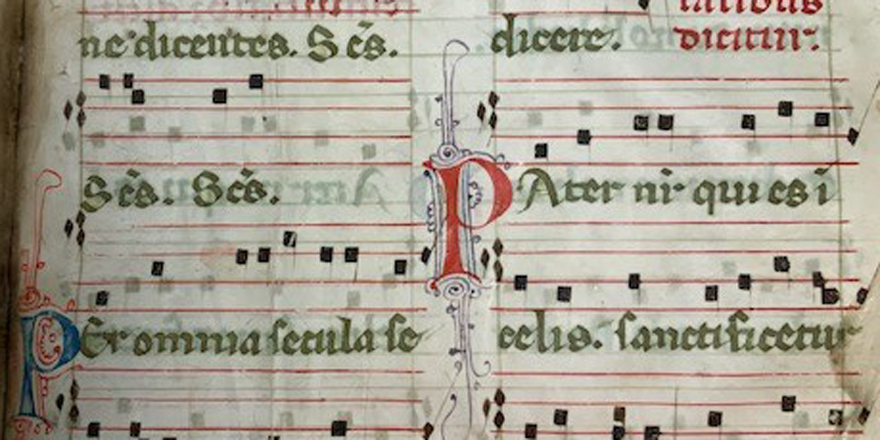 Attributes like bindings, decoration, collation, and illustration provide valuable information on the production and usage of historical texts. By comparing two medieval texts in Academy collections, we can see the importance of a codicological approach to manuscript studies.

For more images and information on the Book of Hours, MS 12 R 31, take a look at our Twitter thread from Decemer 2020.