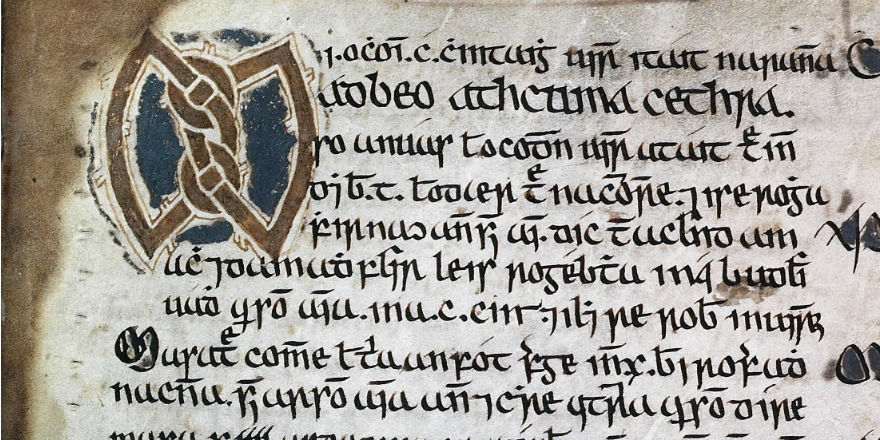 ‘Keepers of the Gael’ is a wonderful exhibition currently being hosted by Galway City Museum as part of the Galway 2020 European Capital of Culture programme of events. The new exhibition draws on archaeological research, museum artefacts and late medieval Irish manuscripts to explore many aspects of the cultural, intellectual and physical environment of the schools of higher learning that existed in pre-modern Gaelic Ireland.

Two vellum manuscripts, from two separate archives, are displayed in a prominent place at the centre of the exhibition. The two manuscripts were originally one. Both British Library MS Egerton 88, and Royal Irish Academy MS 23 Q 6 (section D, pp 33–52) were written in the 1560s by Donal O’Davoren (Ó Duibhdabhoireann) and his students. They were affiliated to the O’Davoren law school at Cahermacnaghten (Cathair Mhic Neachtain) in the Burren region of north Clare. The students worked partly at the MacEgan (Mac Aodhagáin) law school at Park, in north Galway where older manuscripts were available that could be copied.

Another small fragment of the same O’Davoren manuscript is now in the Royal Library in Copenhagen (MS 261B). The eighteenth-century scholar responsible for dispatching this part to Scandinavia was Colonel Charles Vallancey, MRIA (1725?–1812). He gave it to an academic friend as a sample of an Irish manuscript, in the hope that other Irish manuscripts might be recognised if they came to light in Denmark. Historian and archivist Grimr Jonsson Thorkelin (1752–1829), who was interested in early Irish history, almost certainly met Colonel Vallancey during a visit to Britain and Ireland between 1786 and 1791. The manuscript has remained in Copenhagen where Thorkelin was archivist at the Royal Library.

The main part of the O’Davoren manuscript was acquired by James Hardiman, MRIA (1782–1855). He later sold it to the British Museum in 1832, where it was catalogued as Egerton 88. The acquisition by the Museum was funded by a bequest from Francis Henry Egerton, Earl of Bridgewater (1756–1829).

A smaller fragment was acquired by the Royal Irish Academy sometime before 1844. It came as part of ‘a collection of disjointed fragments’, now with the shelf-mark 23 Q 6, that appear to have already been bound together when Eugene O’Curry first catalogued them in 1842–4. 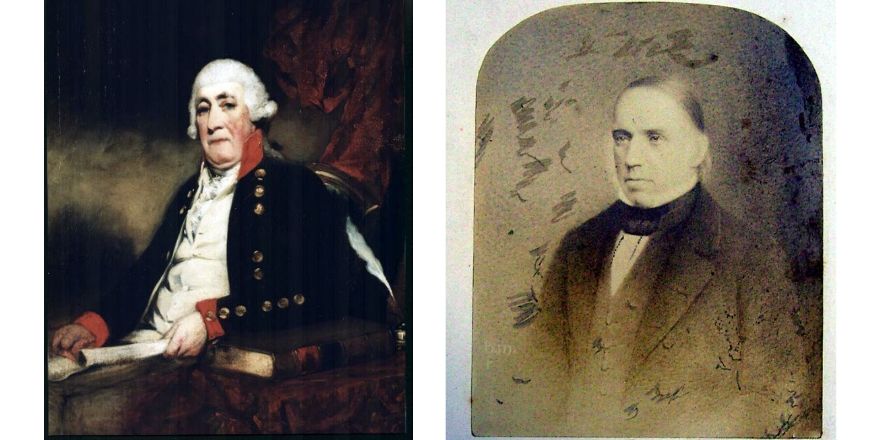 Eugene O’Curry, MRIA (1794–1862), who had special expertise in Irish legal manuscripts, and who arranged the present sequence of leaves in British Library MS Egerton 88, was the person who deduced that one section of Royal Irish Academy MS 23 Q 6 had once formed part of Egerton 88. All the surviving sections can potentially be reunited in a virtual way as part of collaborative projects to digitise significant Irish manuscripts, but the exhibition in Galway provides a unique opportunity to see the original vellum manuscripts, produced in the county 450 years ago, side by side. 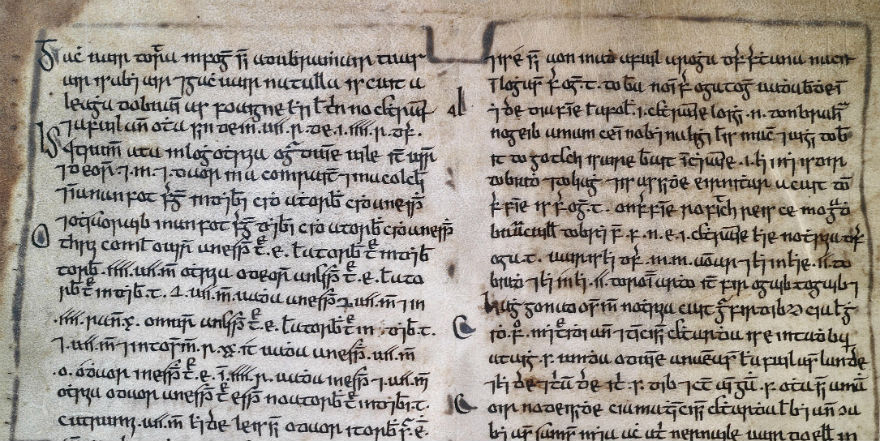 The law manuscript that Colonel Vallancey, James Hardiman, Eugene O’Curry and other scholars tried to elucidate in the late eighteenth and early nineteenth centuries is still a rich source for the study of the ancient laws of Ireland. The texts transcribed by O’Davoren and his students preserve some of the early laws of Ireland, later termed ‘brehon’ law by English commentators.

The format in which these legal manuscripts were transcribed was quite complex. They often consisted of an early ‘text’ written in large script, believed to preserve elements of Irish law that originated in the seventh or eighth centuries. Surrounding that text, in smaller script, were explanatory glosses and commentaries. These later interpretative elements had accumulated in the law schools over several centuries.

The manuscripts in which the earliest Irish law texts are now preserved generally date from the fifteenth and sixteenth centuries, most older ones having been lost. Through the nineteenth and much of the twentieth century scholars focused on recovering and producing editions of the earliest elements of these legal texts. Manuscripts dating from the fifteenth and sixteenth centuries were used to recover early Irish law as it may have existed in the seventh or eighth century. It is only in more recent years that attention has turned to the social contexts within which these early modern manuscripts were produced, and the evidence they contain for how Irish legal principles were studied, adapted and applied by the professional learned class down to the late sixteenth century.

An interdisciplinary symposium in the Hardiman Library at NUI Galway on 25–26 January 2020 will explore the physical and cultural landscapes of the learned schools of sixteenth-century Ireland, and most especially the O’Davoren law school at Cahermacnaghten. Archaeological excavations, museum artefacts, and evidence for the political and social context within which lawyers and their students operated in late medieval Gaelic Ireland will be discussed. This promises to be a more holistic approach to the study of these law schools than has previously been attempted.

The symposium is hosted by the Centre for Antique, Medieval and Pre-Modern Studies, Moore Institute (NUI Galway), in collaboration with the School of Celtic Studies (Dublin Institute for Advanced Studies) and Galway City Museum, and is coordinated by Professor Elizabeth FitzPatrick, School of Archaeology, NUI Galway. A guided visit to the ‘Keepers of the Gael: Culture and Society in Gaelic Ireland c. 1200-1600 AD’ exhibition in Galway City Museum is also part of the seminar programme.

MS 23 Q 6 has been digitised and is available to view via Irish Script On Screen.

Exhibition : Keepers of the Gael.