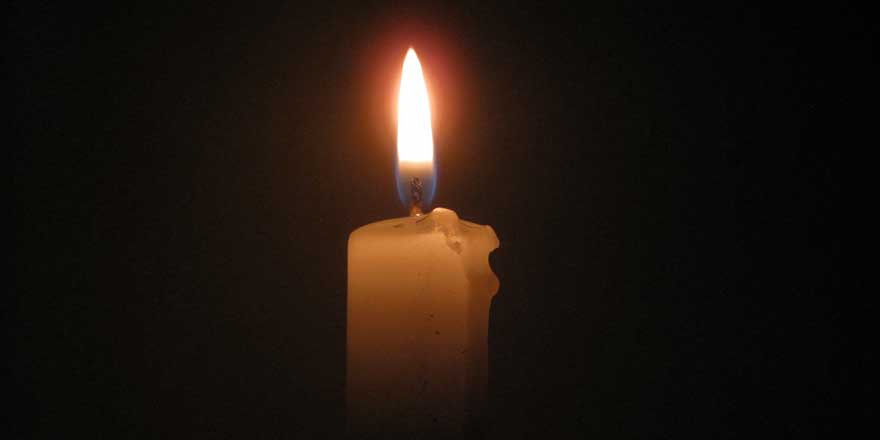 The latest Library Blog post takes a look at the life of a nineteenth-century cataloguer.

The Academy’s chief cataloguer of manuscripts in the 1840s was Eugene O’Curry. He was also employed as a scribe, making copies of valuable manuscripts still in private hands. He worked by candle light in a cold building, and would have liked a few creature comforts. 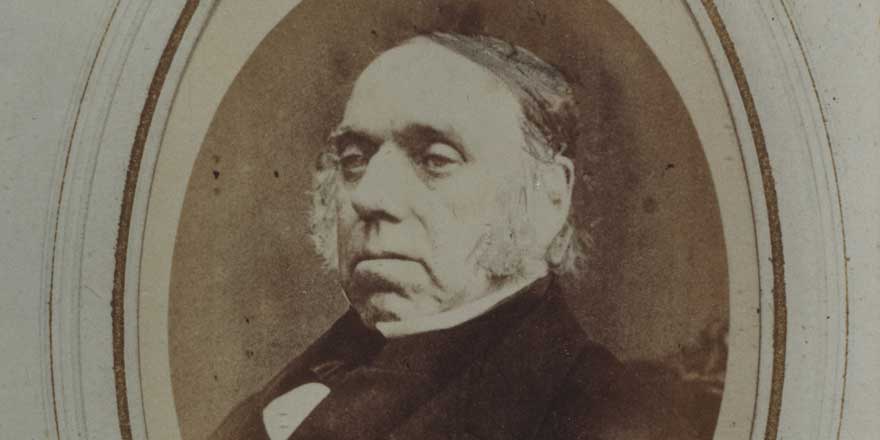 During the 1830s and 1840s the Royal Irish Academy rapidly gained a reputation as the premier archival repository for manuscript material in the Irish language. Decades before the creation of a national library for Ireland, the Academy Library fulfilled that role from its base at Navigation House, 114 Grafton Street, across the road from the Provost’s House of Trinity College, Dublin. Even before the Academy’s new library and museum building opened at 19 Dawson Street, beside the Mansion House, in the 1850s, specialist scholars were hard at work cataloguing the Academy collections of Irish manuscripts. 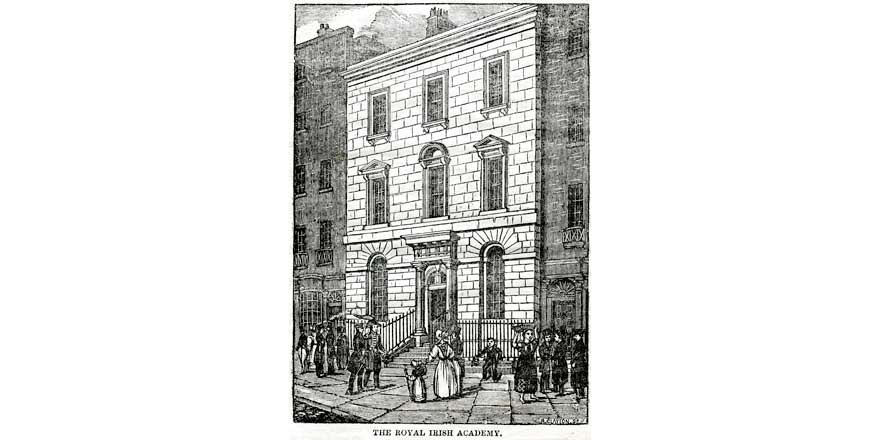 The chief cataloguer was Eugene O’Curry (Eoghan Ó Comhraí, 1794-1862). Commencing in 1842, he worked for two years on a detailed descriptive catalogue of the Irish manuscripts that the Academy had acquired up to that date. His hand-written catalogues still survive, and are still available for consultation by registered readers. They were in regular use for a hundred years, as the key to the Academy’s manuscript collections. His work was later continued by J. O’Beirne Crowe and was supplemented in the early twentieth century by notes and observations by other scholars including W. J. Purton, J. H. Lloyd, J. J. MacSweeney, P. S. Dinneen, and E. J. Gwynn, in a series of 186 notebooks (Now bound in 31 volumes, [SR]  67 M 1-17; 67 N 1-14).

O’Curry’s catalogues only began to be superseded from the 1920s by the publication of a new multi-fascicule Catalogue of Irish Manuscripts in the Royal Irish Academy, the work of T. F. O’Rahilly, Kathleen Mulchrone and others. O’Curry’s descriptions of manuscripts are still of interest to specialist scholars. Since February 2017 the online catalogue of the Academy’s manuscripts provides cross-references to the relevant volume and page-numbers of O’Curry handwritten catalogues.

O’Curry was frequently able to use his personal knowledge to identify the scribes of unattributed manuscripts. His thorough knowledge of the Irish manuscript collections acquired by the Academy emerges time and again in his descriptions of individual manuscripts. By the time he was employed as an archivist and scribe in the Academy in the early 1840s, he was a very experienced scholar. He had worked as a researcher on the Ordnance Survey project from 1835 to 1842, during which time it is estimated that he had consulted some 30,000 pages of manuscript (DIB).

Some years before O’Curry was employed as a cataloguer, he had worked for the Academy as a scribe. In 1836 he was employed to transcribe Dubhaltach Mac Fhirbhisigh’s Book of Genealogies. This was a major seventeenth-century source for the pedigrees of the leading families in Irish society. Three years later, in 1839, he transcribed the Book of Lismore, a late medieval vellum manuscript miscellany still in private hands. He was paid £50 for his transcript of the Book of Lismore.  In 1840, at the request of J. H. Todd, he transcribed the Annals of Ulster from the sixteenth-century manuscript in Trinity College, Dublin. Later, in 1848, he transcribed the entire contents of the Book of the O’Conor Don (1631), which preserves unique copies of many classical modern Irish poems.
He worked in the evenings by candle light. Gas light had begun to be installed in Dublin in the 1820s, but had not yet come to Navigation House. The Academy’s premises on Grafton Street, where O’Curry made his transcripts, could be cold and dark.

In a twist of fate, because of his various roles as scribe and cataloguer, O’Curry had the opportunity of writing catalogue entries describing his own earlier transcripts of manuscripts. Still working with nothing but the light of a candle, in the early 1840s he wrote the catalogue entry for his transcript of Mac Fhirbhisigh’s book of Genealogies. Rather than describing the manuscript in detail, he observed:
‘Under any circumstances it is difficult to make a facsimile of an ancient much defaced manuscript of nearly a thousand pages, but the circumstances under which I made this transcript were particularly unfavourable. The entire book was written by candle light after hours, and the person who was at that time in charge of the Academy having compelled me to write by the light of one small candle, and often without a fire, and submitted me to many other vexatious obstructions, the transcript is, consequently, in some places uneven and inelegant. It is however always correct.’ (RIA, O’Curry Catalogue of Irish Manuscripts, 1st series, vol. 3, p. 1072 (RR/67/E/11) 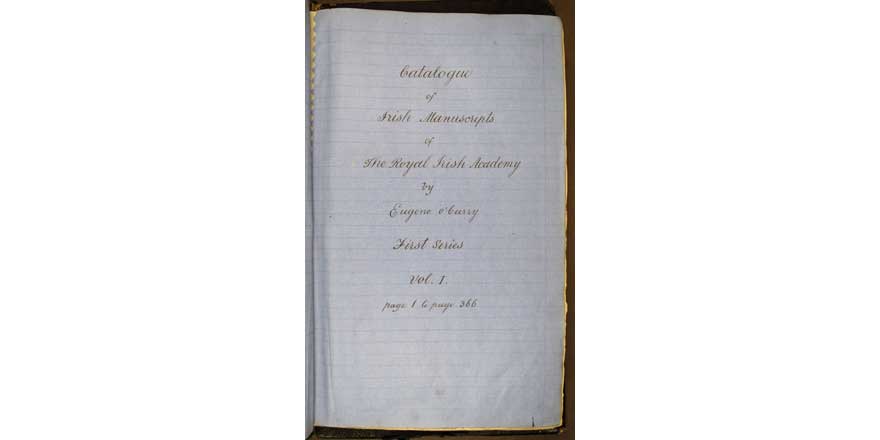 The remainder of his catalogue entry for the item (now RIA, MS 23 P 1) replicated George Petrie’s observations on the historical value of Mac Fhirbhisigh’s genealogies.

It was probably while examining his own transcript with a view to cataloguing it that O’Curry decided to make a small addition to the manuscript. He added a phrase to his own scribal colophon on the final page of his copy of the Book of Genealogies. He had originally written: 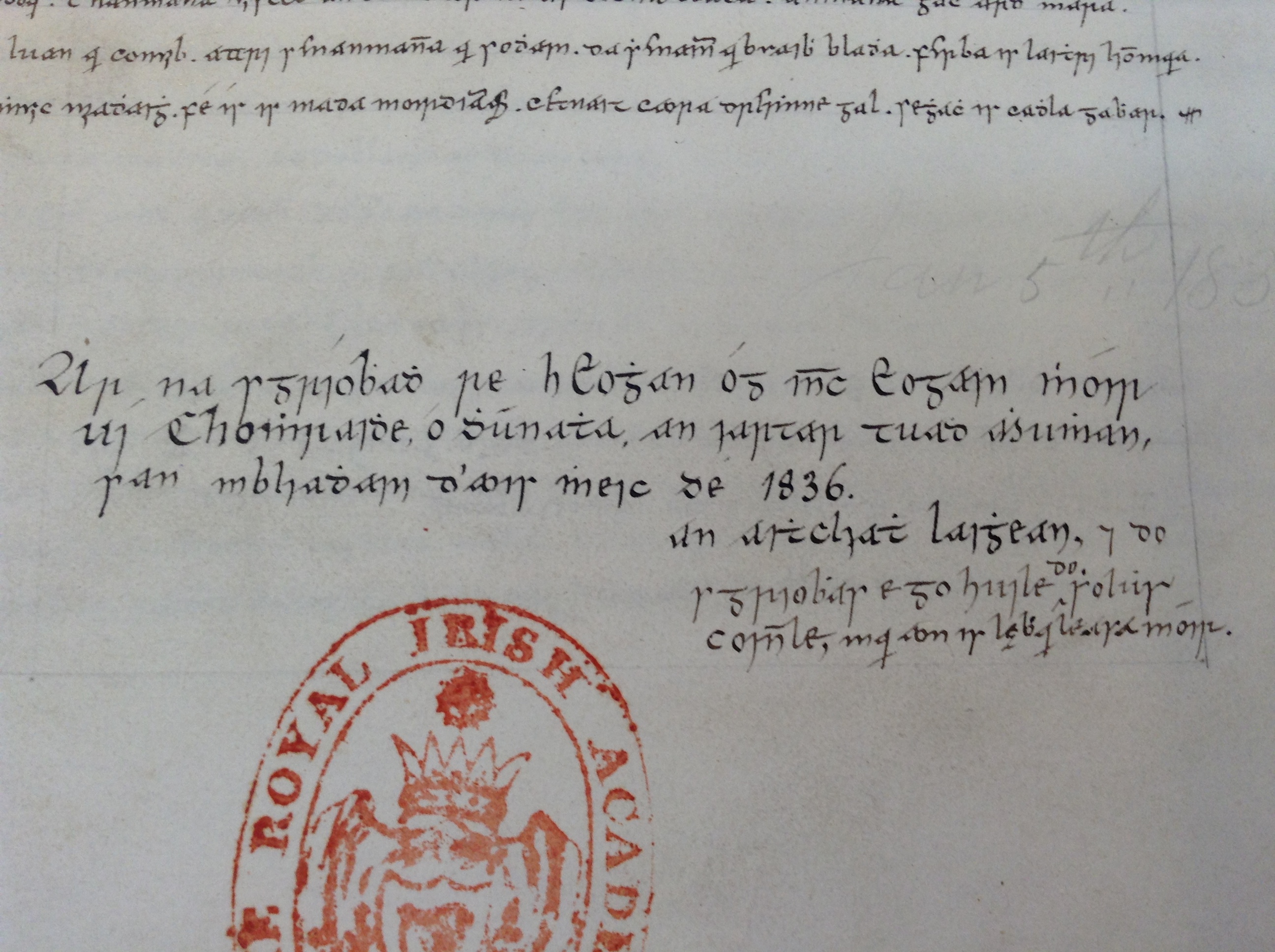 Scribal colophon at the end of Book of Genealogies (RIA, MS 23 P 1). O’Curry noted that he copied the manuscript by candle light.

A polite, retiring man, O’Curry was perhaps not as assertive as he might be in his daily life. But his skill with pen and ink knew no bounds and, in his catalogue description of his own manuscript, he had his revenge on the miserly administrator who would not give him a second candle, as he strove to make painstakingly accurate transcripts of some of Ireland’s great cultural artefacts.

Eugene O’Curry was elected to membership of the Royal Irish Academy in 1853. In the following year he was invited to take up the position of professor of Irish history and archaeology at the newly established Catholic University in Dublin. He taught there for the last eight years of his life. His lectures at the new university drew on a lifetime’s research on Irish manuscript materials. Among his audience was John Henry Newman who personally sanctioned funding to allow for the publication of O’Curry’s Lectures on the manuscript materials of ancient Irish history (1861). Further collections of his lectures at the Catholic University were posthumously published in three volumes as Lectures on the manners and customs of the ancient Irish (1873). These publications allowed O’Curry share his vast knowledge of Irish manuscripts with a wide readership. Drawing on his years of close scrutiny of the Academy’s Irish manuscripts, both as a cataloguer and as a scribe, his lectures helped bring Ireland’s medieval manuscript heritage from darkness into light. His published work was particularly influential in setting the agenda for the cultural revival of the late nineteenth century.

Eugene O’Curry died 155 years ago on 30 July 1862, and was buried in Glasnevin Cemetery, where a large Celtic cross marks his grave.