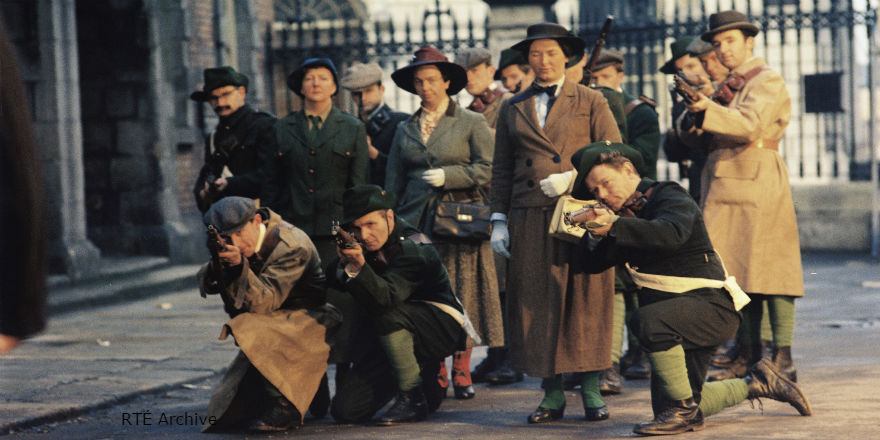 From the Reading Room: In the latest Library Blog post Archivist Karen de Lacey delves into the Nowlan archives.

The news last year that RTÉ were to screen their well known 1966 drama Insurrection, commissioned for the 50th anniversary of the Easter Rising, was of particular interest to us here in the RIA Library.

In 2013, following his death at the age of 91, the Academy was gifted the papers of Prof. Kevin B. Nowlan MRIA, the Dublin-born historian and champion of architectural conservation. This extensive collection of papers reflects his varied interests and work. Cataloguing the Nowlan collection, I found the papers relating to his work with RTÉ in 1966 to be particularly interesting and timely.

In 1965, Nowlan was appointed as Historical Advisor to both Raidió Éireann and Teilifís Éireann in respect of the commemorative programming for the Golden Jubilee of the 1916 Easter Rising. This meant that no scriptwriters or researchers were to be appointed without Nowlan’s endorsement and no scripts were to enter production without his prior approval.

The planning for the commemorative programming had begun as early as 1963 when Francis MacManus, General Features Officer at RTÉ Raidió Éireann commissioned a series of radio interviews with survivors of the Rising. Proinsias MacAonghusa undertook the interviews, noting in a letter to MacManus “As you know, the list of survivors gets thinner week by week”[1]. 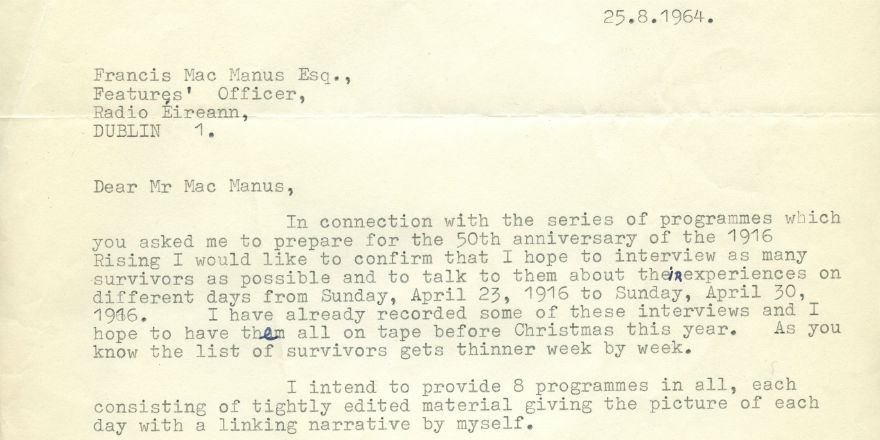 Those working on the commemorative programmes had to cater both to those survivors of the Rising who were still alive in 1966 and a younger generation who knew little about it due to the “sustained neglect” of the period by Irish historians.[2] It is worth noting that this neglect was in part due to the scarcity of primary sources available to those interested in the period. The valuable witness statements collected by the Bureau of Military History between 1947 and 1957 would not be open to the public until 2003. Historians had to rely largely on newspapers, parliamentary reports and what autobiographies had then been published by some of the survivors. Furthermore, there were difficulties in talking about what was still a relatively recent event, not least one so controversial and divisive. In a 1965 letter to RTÉ regarding researchers for Insurrection, Nowlan noted that the Taoiseach’s Office “are fearful of the names of informers and the like filtering down to local places”[3].

The documents from the planning stages of the commemorative programming show RTÉ making a concerted effort to avoid any potentially controversial aspects of the Rising. It was decided that there should be an emphasis on the surviving participants and that “there should not be an interpretive or analytical approach, but an idealistic and emotional one”[4]. Seán O’Casey’s The Plough and the Stars was deemed inappropriate for the official commemorative drama. The socialist aspect of the Easter Rising was not to be emphasised over the nationalist aspect and vice versa. The word ‘insurrection’ was to be used in place of ‘rebellion’[5]. 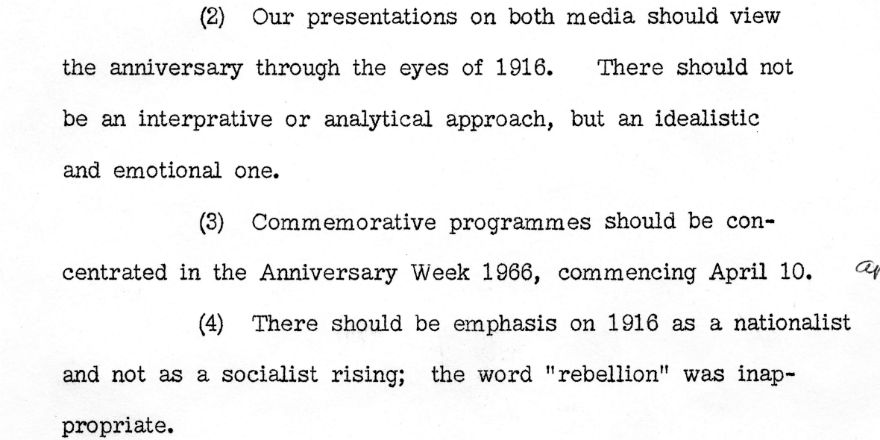 Members of the public were particularly interested in the planned programming and many sent letters to RTÉ suggesting possible topics and interviewees. Some wrote to RTÉ telling their own or their family’s stories from the Rising. One particularly interesting letter, from a William C. Sweeney of Greenwich, recounts two stories from his time working on the boats from Holyhead to Dublin.[6] One of his stories concerns Michael Collins travelling to London for treaty negotiations in 1921 when Mr. Alfred Cope, Assistant Under-Secretary for Ireland, happened to be travelling on the same ferry. Sweeney recounts how Cope had his armed guard vacate his sleeping berth in order to give it to Collins who had been too late in booking to secure one. The other story concerns executioner John Ellis travelling to Ireland to execute Kevin Barry. 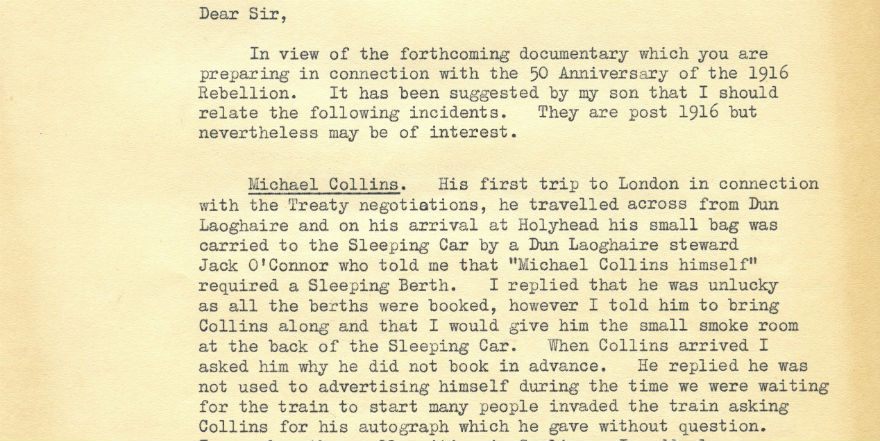 RTÉ’s dramatic offering for 2016, The Rising, came in for some criticism for the supposed inclusion of historical inaccuracies for the sake of drama. Indeed, the story was much the same in 1966. Nowlan disputed elements of Insurrection with the then head of RTÉ, Gunnar Rugheimer, in advance of the programming, concerned that certain elements were not historically accurate and noting that his acceptance of these elements would damage his own work in this period of Irish history. Nowlan’s concerns related to the use of Irish language phrases, a scene showing the wounding and treatment of James Connolly, whether Sean MacDermott had polio as a child and the prominent inclusion of Lieutenant George Mahony.

Once Insurrection was broadcast some relatives of the Easter Rising participants wrote to RTÉ with their comments. Kathleen Mahony, the widow of the aforementioned Lieutenant George Mahony, wrote after the first episode to note how she, her daughters and her son-in-law were “enthralled” to see her husband portrayed on the programme, commenting on how the actor playing her late husband is very like him in looks and mannerisms – “Could you please tell Mr. Murray how wonderfully true his impersonation was?”[7] She wrote once more after the final episode to correct the fallacy that her husband was English, noting that he was born in Cork and “entirely Irish”[8]. 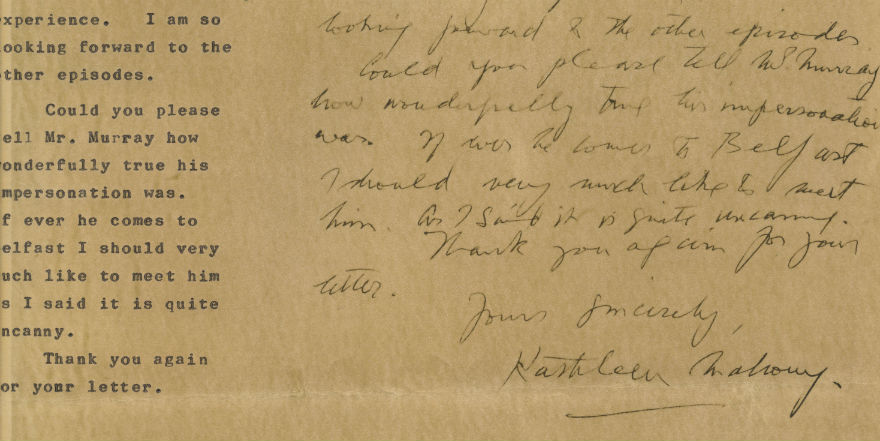 Sarah Floyd, a niece of John J. Doyle, Dublin Brigade Medical Officer 1915-1922, had also written to RTÉ to say that it was her uncle rather than Lieutenant Mahony who dressed Connolly’s wounds and that he lives with her if they wish to verify this story. This was certainly the story which Doyle had given in his witness statement to the Bureau of Military History.[9]

Then, as now, there was an appetite for those whose families were involved in the Rising to tell their stories. This was facilitated in 2016 with projects such as the DRI’s Inspiring Ireland public memorabilia ‘collection days’ where unique items relating to the Rising were digitised and are now available to the wider public on http://www.inspiring-ireland.ie/.

The Nowlan collection is now available to readers. To read the letters shown in this blog in full, please click here for PDF: Celebrating 1916 in 1966 - Letters

This blog has been written with the co-operation of the RTÉ Archives, who also hold material on Insurrection and the 1966 commemorations.
Main image courtesy of RTÉ Archives.