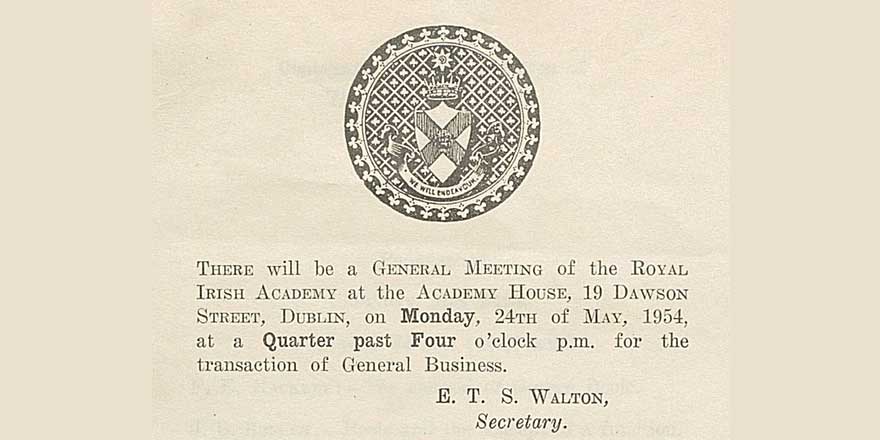 Latest Library Blog post. Emer Twomey looks at the celebrations in the RIA to mark the 100th anniversary of Boole’s The Laws of Thought.

In 2015 University College Cork and UCC Library celebrated the bicentenary of the life and scientific achievements of George Boole, first Professor of Mathematics, Queens College Cork (QCC), with George Boole 200* .

In 2020 UCC Library opened to the public the George Boole Ancillary Collection, containing additional Boole-related material housed in Special Collections & Archives, not part of their main Boole archival collection The Papers of George Boole. The ancillary material includes original letters by and related to George Boole, including a correspondence file on permanent loan from the Royal Irish Academy (RIA), Dublin.

So, you may wonder why there’s a guest blog post for the RIA on George Boole in 2021?

You see 2015 wasn't the only time an Irish institution was to mark the achievements of George Boole. In 1953 Felix Hackett was convener of the organising committee established by the RIA, to mark in 1954 the 100th anniversary of the publication of Boole’s The Laws of Thought. Hackett was a retired Professor of Physics and Electrical Engineering, University College, Dublin.

He wrote a series of letters to Sir Geoffrey Taylor (grandson of George Boole). These involved Taylor in plans and as a participant at the celebration in the Academy by distinguished speakers on Boole’s philosophical and mathematical views and the development of Boolean algebra.

“The celebration has the warm approval of Mr. de Valera who takes a great interest in mathematics” 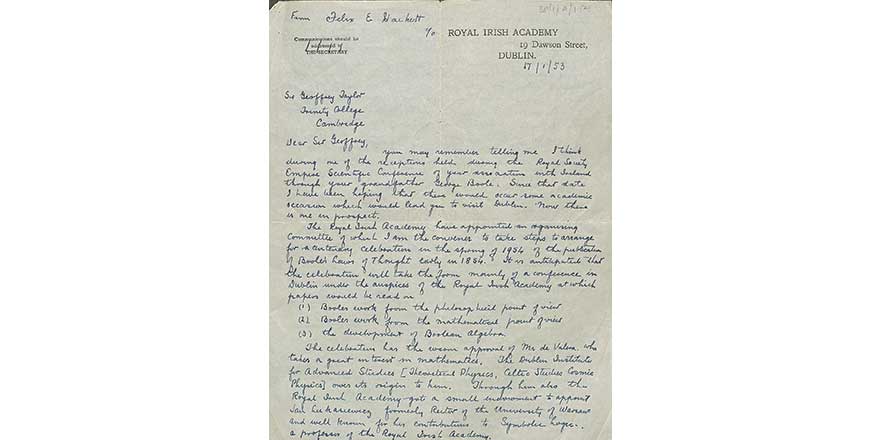 Hackett explains to Taylor that it has fallen to the Academy to mark the centenary as “there is no traditional feeling linking the U.C.C. of today with Q.C.C. of a century ago”. Boole was a member of the Academy and Professor Jan Lukasiewicz (Professor of Mathematical Logic, RIA) recognised the important contribution of Boole to symbolic logic with the publication of The Laws of Thought in 1854 and wanted to honour Boole with a celebration by the Academy involving Boole's family.

Hackett asks if Taylor might be able to induce Bertrand Russell “to write a tribute to George Boole as a pioneer in Symbolic Logic”. He takes the opportunity in his correspondence to ask Taylor questions relating to Boole’s work, upbringing, and family in preparation for his paper for the event.

In the course of correspondence with Taylor, Hackett mentions Boole and Mary Everest Boole (wife of George) material deposited in the RIA “I have deposited The Fellowship of the Dead...I do not pose as a literary critic but all Boole’s verses seem to me to have quality and they are of value to us now as expressing his personality and philosophy of life” (BP/1/A/1 (8)).

The 4 volumes of the Collected Works of Mary Everest Boole published in 1931 by C. W. Daniel, now in the Academy, has greatly interested Hackett “We are well acquainted with the psychic mentality in Dublin with its fondness for Eastern mysticism the waves from such sources as A. E. (George Russell) and W. B. Yeats still beat around us”. 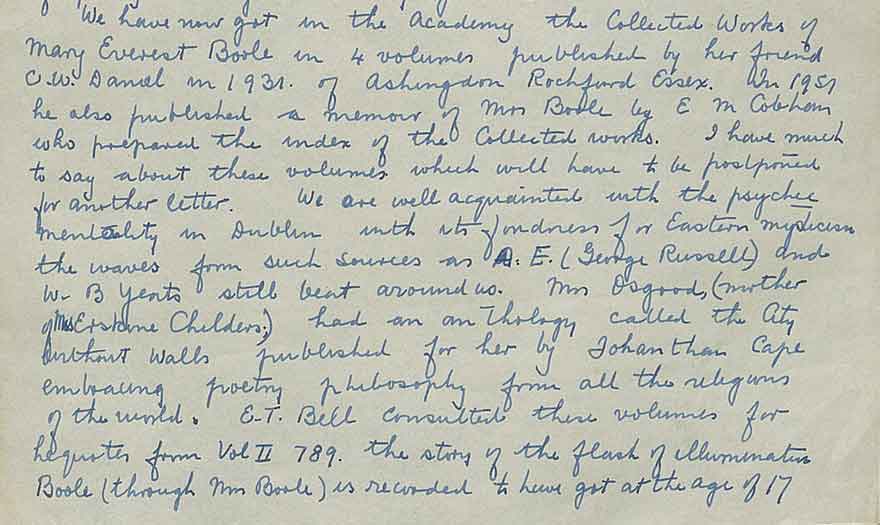 The handwritten near finalised draft programme for the Boole Celebration is included in the file (BP/1/A/1 (14)) as well as the final printed programme (BP/1/A/1 (15)).

The celebrations took place over two days during 24th and 25th May 1954, with a scheduled general meeting of the RIA in the afternoon of day one. The speakers included Felix Hackett, J.B. Rosser, Michael MacConaill and Jan Lukasiewicz. 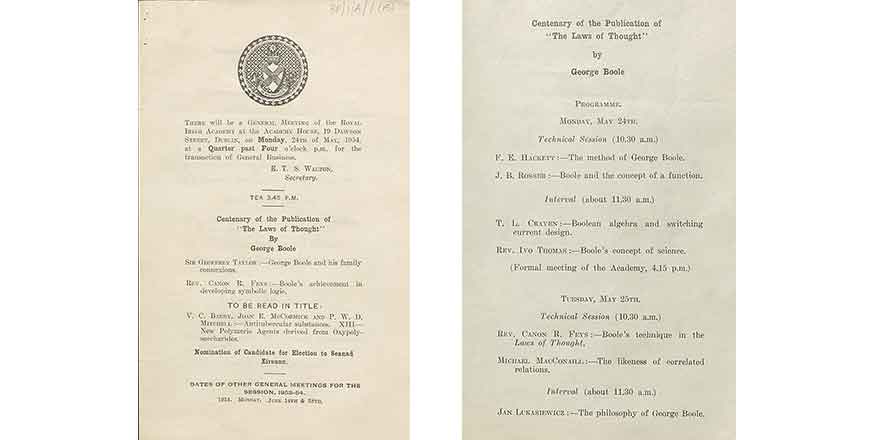 Notice of the General Meeting of the Royal Irish Academy, 24th May 1954 to include the celebrations on the centenary of the publication of The Laws of Thought BP/1/A/1 (15) © RIA

If you are curious about Hackett’s talk, the file includes a copy of the printed pamphlet by Hackett “George Boole and Symbolic Logic” presented during the morning technical session on the 24th May. Topics spoken on are The Education of an Autodidact, How Symbolic Logic Began, and The Laws of Thought (1864-1886)

…“but in 1886 Venn…declares that The Laws of Thought is a work of astonishing originality and power and one which has only recently come to be property appreciated and to exercise its full influence on the course of logical speculation.” 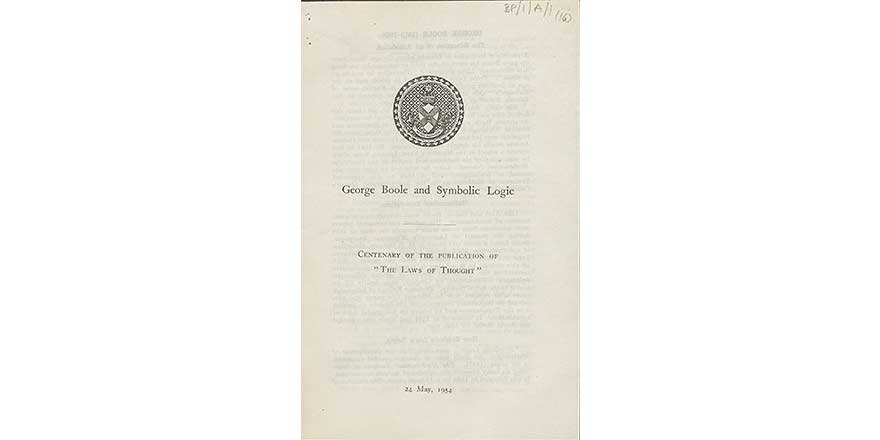 The Royal Irish Academy correspondence file shows the high regard the 20th century scientific community held Boole and his achievements of a century earlier.

The other material in the George Boole Ancillary Collection shows George Boole as academic and family man. To read more about this you might enjoy George Boole: Academic, Author, Husband and Father from The River-side – reflections on research collections at UCC Library.

Acknowledgements: UCC Library wishes to thank the Royal Irish Academy for the use of images of material from BP/1/A/1 in this blog.

Emer Twomey would like to thank Barbara McCormack, Librarian Royal Irish Academy, for the invitation to contribute a guest post to the RIA Library blog.