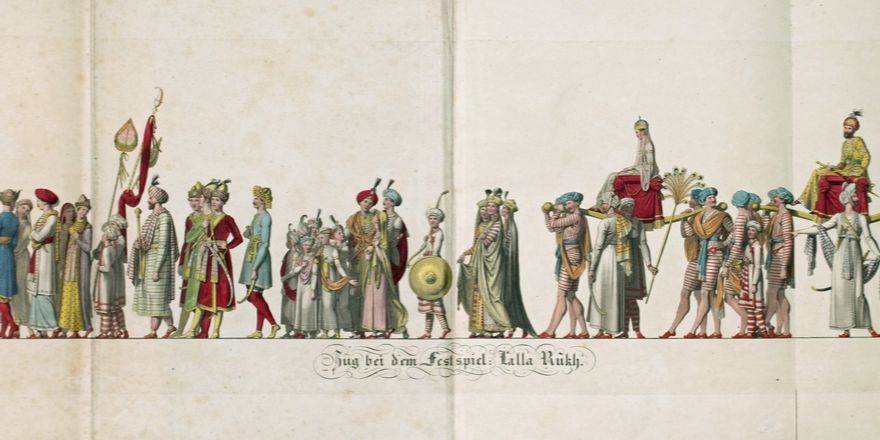 A King of Prussia, a Russian Grand Duke, an Indian Princess — and Thomas Moore — Ireland in Europe in 1821.

For this month's Library blog post Librarian, Siobhán Fitzpatrick, takes a look at a very special new addition to our collections.

The scene: Berlin, Court of the King of Prussia, Wilhelm III (1770-1840).
A cold January night in 1821.  Festive lights burn.  The court is thronged. Chief guests, and participants, are the Grand Duke Nicholas of Russia and his wife, the Grand Duchess Alexandra Feodorovna, Wilhelm’s daughter, whom he had married in 1817.  The future Tsar of Russia and his wife are on an extended stay at her father’s court.

The cast:  Lords and ladies of the court; ambassadors to the court.

The story: Lalla Rookh was first published in London by Longmans in 1817.  It became an overnight sensation and runaway bestseller — ‘the first edition sold out on the first day’[1] ran to multiple London and American editions and was soon translated into Romance, Scandinavian and Slav languages as well as Arabic. Readers throughout Europe were gripped by the adventures of Indian princess Lalla Rookh journeying to marry a Kashmiri king.  En route she meets a minstrel, Feramorz, who accompanies her on her journey.  She falls in love with Feramorz who is, of course, her betrothed in disguise!

The tale within the narrative of the Peri (a Persian spirit denied entry to heaven who has to complete three quests in order to earn entry to Paradise), gave rise to many musical interpretations, including Schumann’s oratorio, ‘Das Paradies und die Peri’ (1843). 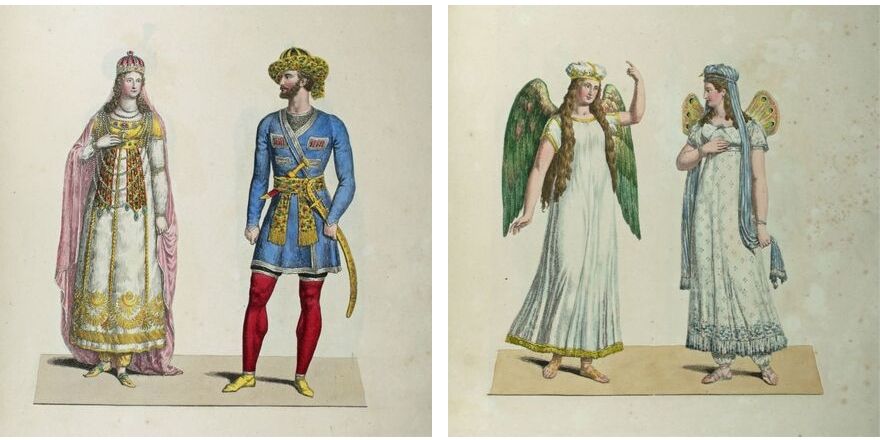 (Left) Plate 6: Lalla Rookh and Aliris, the king of Bucharie (Kashmir) played by the Grand Duchess, Alexandra Feodorovna and Grand Duke Nicholas. (Right) Plate 16: The Angel of Light and the Péri.

Lalla Rookh appealed to the contemporary European fascination with the East – both real and imagined.  The story included songs which lent themselves to musical arrangement, as in the case of the Berlin performance.  The Grand Duchess Alexandra played the title role of Lalla Rookh with the Grand Duke playing the part of Feramorz.  Fantastic costumes were designed and these became the subject of drawings by court painter, Hensel, the originals of which were taken back to Russia by the Grand Duchess.  Lalla Rookh increased Thomas Moore’s exposure in Russia where his Irish melodies were already known and popular.

There were 3,000 guests that 21 January including French writer and ambassador to the German court, Chateaubriand, who commented that the tableau vivant was ‘the most splendid and tasteful thing he had ever seen.’[2]  Soon everyone was talking about the outstanding Berlin production — Byron, Goethe, the literati, the great and the good of Europe, all knew of it.  Lalla Rookh’s fame spread further, even to the shores of India itself. 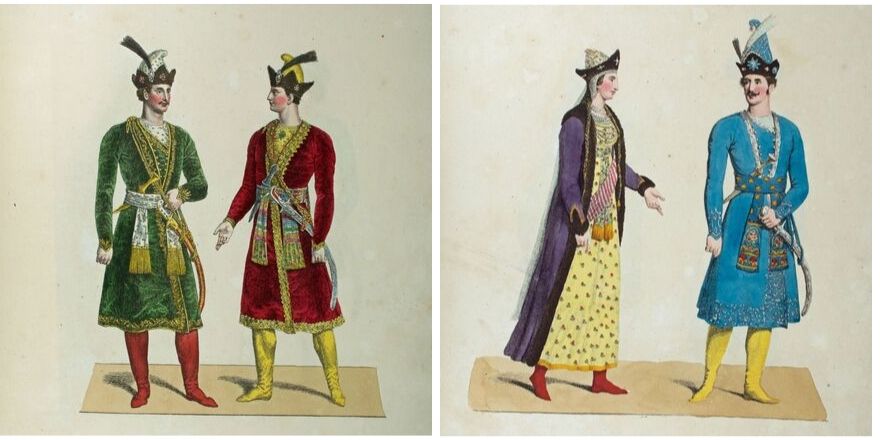 Including 23 colour plates of the participants, this is an important record of their names, the costumes and the script on the night.  Thomas Moore had a personal copy which was retained by Mrs Moore for her own collection when she donated his library to the Academy in 1855.  The little volume, inscribed by Moore and with his wife’s bookplate, was subsequently owned by S.F. Cresswell who bought it at the sale of Bessy Moore’s collection in 1874. Later it belonged to Belfast collector Andrew Gibson who donated his collection of Moore material to Queen’s University Belfast, although he too chose to retain this copy. The volume changed hands again but in the summer of 2019 it came up for sale in Dublin. 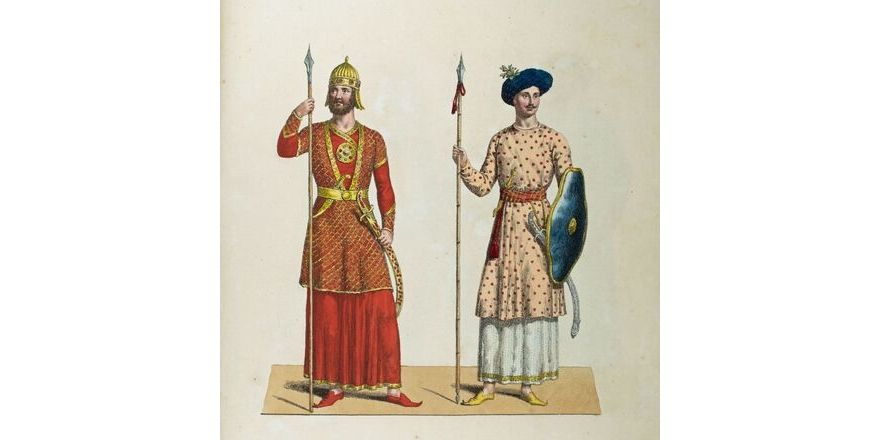 Plate 17: Mahmoud, the Tyrant of Ghizna, and the Dying Warrior

The Royal Irish Academy Library purchased this special book, using our Seamus Heaney Special Acquisitions Fund and with generous assistance from the Friends of the National Collections of Ireland to whom we are indebted.

So the Lalla Rookh which linked a King, a future Tsar and an imagined Indian princess has come home to Ireland, to Thomas Moore’s own library at the Academy.  We are proud to have it for our Moore collection and also for the national collections of Ireland.

Acknowledgement:  We sincerely thank the Academy Library Committee and the Council of the Academy for their support of the purchase.

Our free lunchtime lecture series on Moore is being held in autumn 2019.  All welcome.