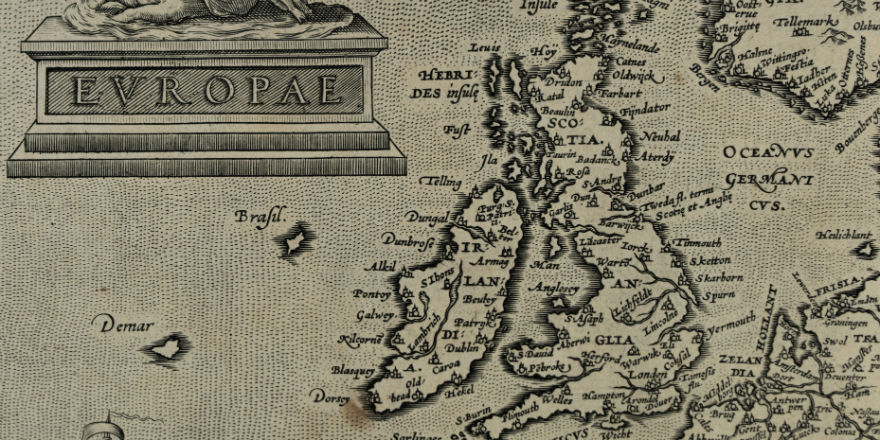 This month's Library blog post takes you on a journey to an enchanted island ...

One hundred and seventy-five years ago the Academy bought an unusual looking medieval manuscript with an even more unusual provenance story. A story of kidnap, an enchanted island, a magical book and an old Irish family.

The island of Hy Brasil has been spoken about for generations in the West of Ireland. A phantom isle shrouded in a cloud of mystery, said to only be visible every seven years. Does it exist? Did it ever exist?

The island has appeared on maps and charts from as early as 1325 and up to the late 1800s. Tales are told of sailors setting out in search of the island to no avail. Yet there are also accounts of sailors successfully finding the island or happen upon it by chance. John Nisbet, a Scottish sea captain claimed to have seen the island in 1674 while travelling from France to Ireland. Four members of the ship’s crew went ashore and were met by a ‘wise old man’ who gave them gold and silver. The sailors also came back with tales of large black rabbits and a magician in a castle. 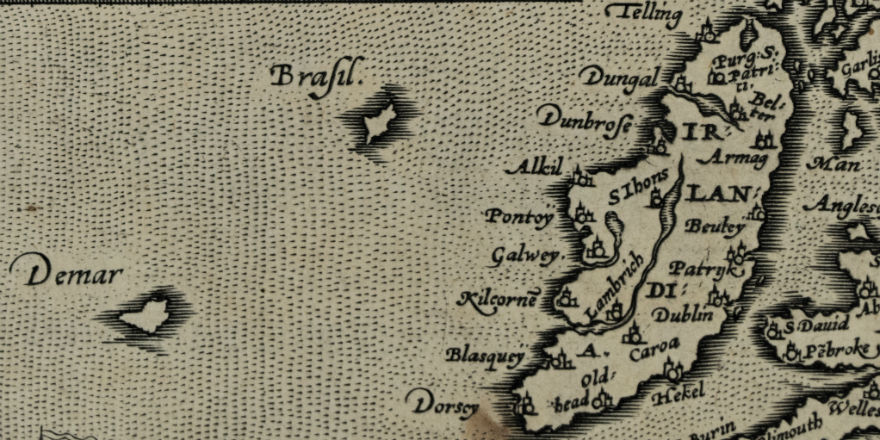 One of the last written accounts of a sighting was by the antiquarian and archaeologist T. J. Westropp, who states he saw the island on three different occasions. On one of these occasions he took along his mother, brother and some friends:
‘It was a clear evening, with a fine golden sunset, when, just as the sun went down, a dark island suddenly appeared far out to sea, but not on the horizon. It had two hills, one wooded; between these, from a low plain, rose towers and curls of smoke. My mother, brother, Ralph Hugh Westropp, and several friends saw it at the same time; one person cried out that he could ‘see New York’!’ 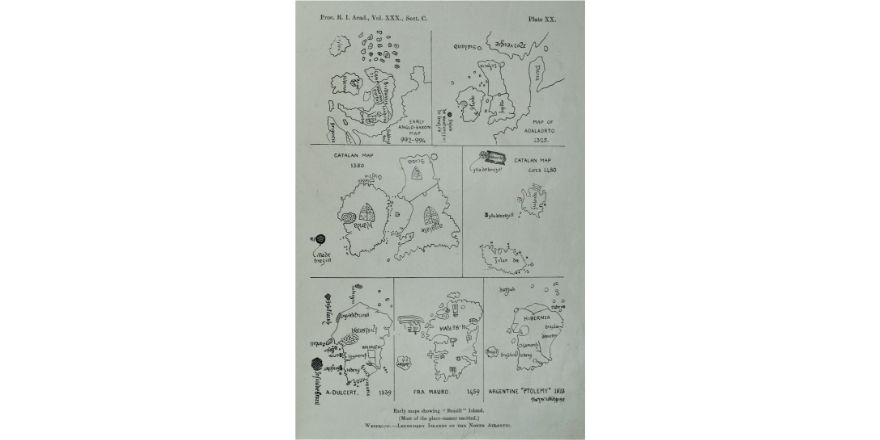 Historian Roderick O’Flaherty, a native of the West of Ireland, wrote a description of West Connaught in 1684, which includes local history and lore. O’Flaherty recounts a story of a man named Murrough O’Ley and his astonishing claims of being transported to the island of Hy Brasil. In April 1668, O’Ley, in a melancholy state of mind after a disagreement with his wife, was out walking at Irrosainhagh, in the south of the barony of Ballynahinch. He was taken by force by two or three men who put him on a boat and sailed to an island they called O’Brazil. O’Ley did not give a description of the island itself but from its shore he could see the Aran Islands and other places along the West Coast. After two days, his kidnappers returned him to Seapoint, near Galway, ‘hoodwinked’. There he stayed with a friend for a number days. Some years later, O’Ley found he had the gift of healing even though he had never studied medicine. The implication was that he had been given this gift on the magical island of O’Brazil.

In 1846, the historian James Hardiman published O’Flaherty’s account and noted that the story was still remembered in the area, almost 200 years after the event. By Hardiman’s time the tale had been embellished, as often happens with time. One addition to the story tells of O’Ley being given a book whilst on the island and told not to open it for seven years. O’Ley obeyed and after seven years opened and read the book and henceforth had the power to heal. 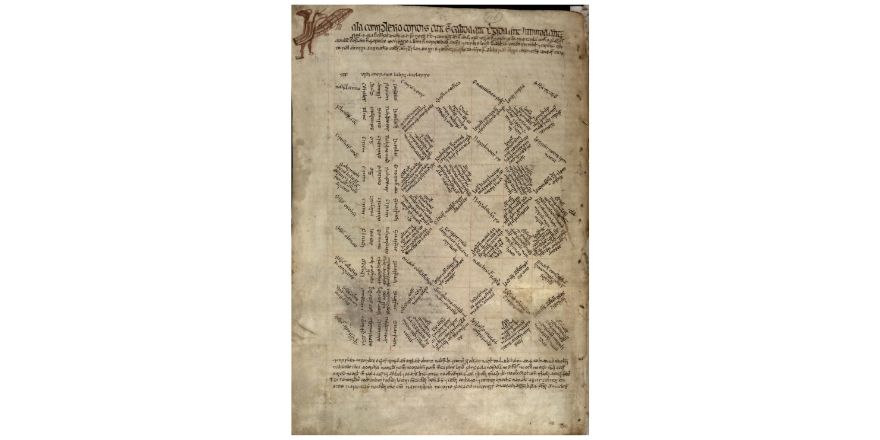 In 1839, John O’Donovan, whilst working on the Ordnance Survey, also heard the story of Murrough O’Ley and his adventures. O’Donovan’s version of the tale tells of a fishing crew, including O’Ley, passing an island which they did not know. They landed and were immediately confronted by an old man on the shore, who told them they had no business being there as it was an enchanted island. Before they set off from this unknown island, the old man gave O’Ley a book with instructions not to open it for seven years. In this version O’Ley again obeys the instructions and after several years found he could ‘practice medicine with much success.’ The book stayed within the O’Ley family until around 1837 when it was sold to a bookseller in Dublin. The introduction of a ‘magical book’ to the story explains better how O’Ley gained his gifts of medicine and healing. As O’Donovan notes:
‘O’Flaherty’s version is flawed and defective … affords no explanation of the manner in which the quack obtained his medical information, but the introduction of the medical book makes the story perfect. The truth seems to have been this, that Lee got this book from his relatives who were hereditary physicians and taking it in head to turn quack forged.’ 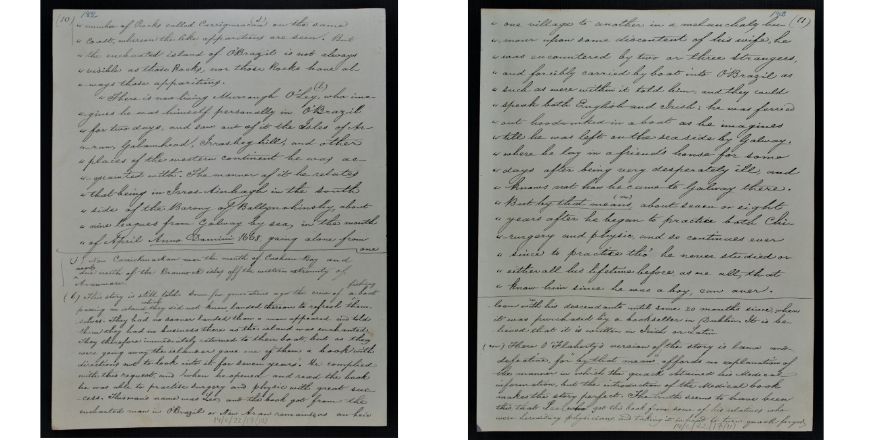 The book which features so prominently in the tales above was purchased in 1844 by the Academy, along with other manuscripts. It is still known today as the Book of O’Lees or the Book of Hy Brasil, linking it forever more to the legend of the enchanted island. The book is a fifteenth-century Irish language medical manuscript. It contains 44 tables outlining details of diseases with their prognosis, stage, symptoms and cures. The text is a translation of a Latin work Tacuini aergritundium, which is itself a translation of a twelfth-century Arabic text by Islamic physician Ibn Jazhal of Baghdad. There are drawings of strange looking creatures in the corners of many of the pages. These are later additions to the book. Could they have been added to give credence to its purported origin story? 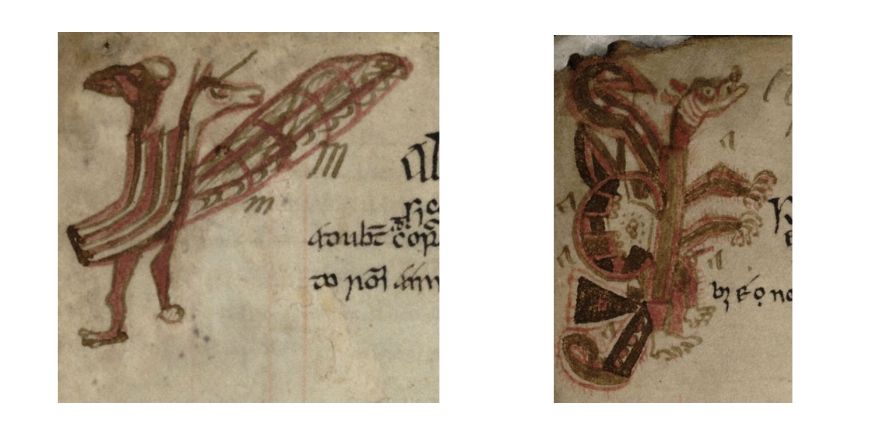 Eugene O’Curry was employed as a cataloguer by the Academy Library in the 19th century. His entry for the Book of O’Lees runs to many pages and includes the fantastical story of its provenance, taken from the writings of O’Flaherty, Hardiman and O’Donovan. O’Curry’s thoughts on O’Ley’s story are clear:

‘The delusion took well with his credulous countrymen, and the extraordinary arrangement of the book itself, written in all directions, was sufficient to confirm the ignorant, to whom only it was permitted to be shewn, in its miraculous history … The common sense of the above wild story is this. The O’Lees were long time hereditary physicians to the O’Flahertys. This book certainly belonged to them and descended as a matter of course to the above [i.e. Murrough O’Ley] who in consequence of the downfall of his patrons … had his expectations neglected … no practical use for the book. He adopted the above scheme to make a character and name for himself.’ 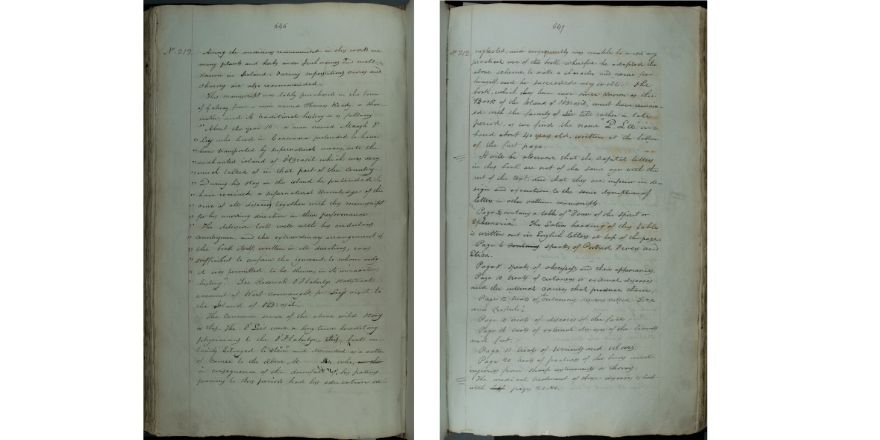 O’Curry and his peers in the 19th century were not impressed by Murrough O’Ley’s story, but who really knows what the truth is? Next time you are on the west coast of Ireland, keep your eyes open!

Aoibheann Nic Dhonnchadha, ‘The “Book of The O’Lees” and other medical manuscripts and astronomical tracts’ in Bernadette Cunningham and Siobhán Fitzpatrick (eds), Treasures of the Royal Irish Academy Library (Dublin, 2009), 81-91.

Barbara Freitag, Hy Brasil: the metamorphosis of an island. From cartographic error to Celtic Elysium (Amsterdam, 2013).

James Hardiman (ed.) A Chorographical description of West or h-Iar Connaught...1684..., / by Roderic O'Flaherty ... ; edited from a ms. in Trinity College Dublin with notes and illustrations (Dublin, 1846).

T. J. Westropp, ‘Brasil and the Legendary Islands of the North Atlantic: their history and fable. A contribution to the "Atlantis" problem.’ Proceedings of the Royal Irish Academy: Archaeology, Culture, History, Literature, Vol. 30 (1912/1913), pp. 223-260.

Irish Script on Screen:
Digitized version of RIA, MS 23 P 10 (ii) (The Book O’Lees or The Book of Hy Brasil)