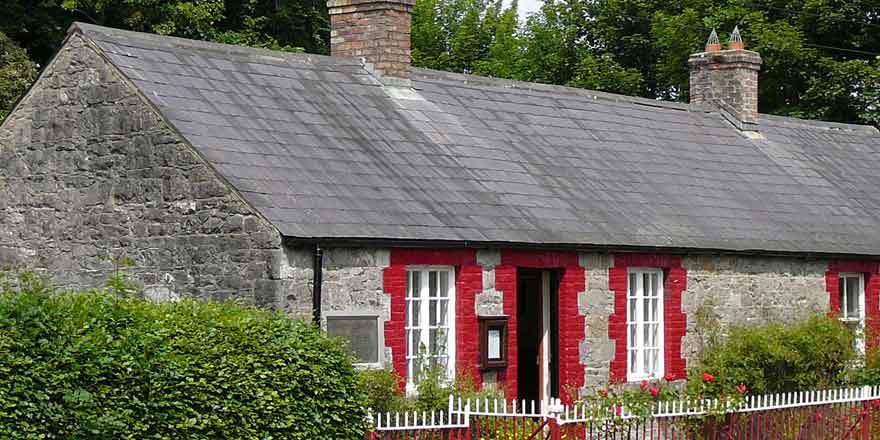 ‘This is a song a robin sang , this morning on a broken tree’

The Battle of Passchendaele

The Battle of Passchendaele (also known as the Third Battle of Ypres), an allied offensive in western Flanders, commenced on 31 July 1917 ending on 6 November. Even today, General Haig’s decision to press on at Passchendaele, despite huge losses in a veritable quagmire caused by prolonged heavy rains and incessant shelling, is deeply controversial.

Present at Passchendaele on the first day of the offensive was a young Irish poet, Francis Ledwidge, from Slane, Co. Meath. Born in 1887 to an impoverished family of Anglo-Norman descent, Ledwidge was acquainted with hardship from his earliest days. The death of his father in 1892 forced Ledwidge’s mother, Anne, to take on various jobs in order to supplement the meagre family income. Francis had to leave school at 13 to work as a farm hand. Well-read and a lover of poetry, he began to write around this time. His verse was rooted in his local environment, the fields and streams of Meath, the Boyne Valley, Skreen crossroads. He shared a love of natural history with his friend, printer’s apprentice, Matty McGoona and they regularly walked the banks of the Boyne observing the flora and fauna, the insect life etc. It is poignant that the only volume of Ledwidge’s poetry published in his lifetime was entitled Songs of the fields (1916). 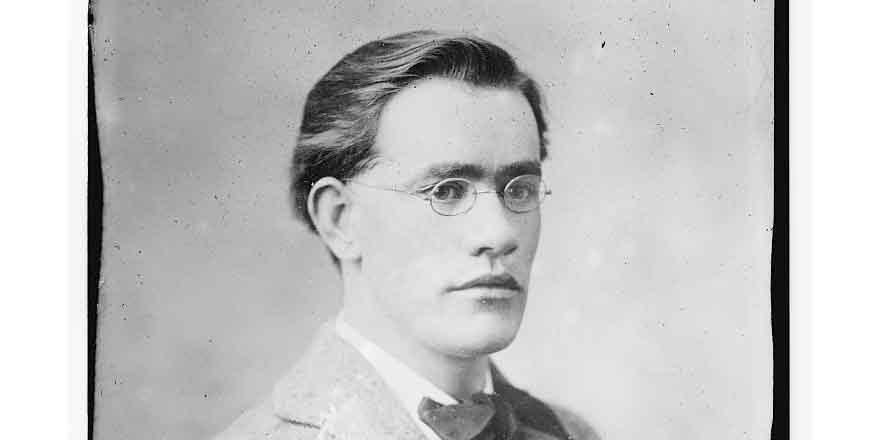 The poet was encouraged in his literary endeavours and later supported financially by a fellow Meathman, Lord Dunsany, soldier and poet, who introduced the younger poet to literary circles in Dublin where he met Yeats, Katherine Tynan and Thomas MacDonagh among others. Ledwidge was a member of the Irish Volunteers but early in the War he enlisted with the Royal Inniskilling Fusiliers, Dunsany’s regiment, and saw service at Gallipoli and in Serbia. In Greece, Ledwidge observed nature as acutely as he had in Ireland. The final stanza of ‘The Coming of the Sheep’ is particularly visual ―

Before the early stars are bright

And the moon comes large and white

Filling with a lovely light

Then sleep raps every bell up tight

And the climbing moon grows small.

Recuperating in Manchester from a back injury he heard news of the Easter Rising at Dublin and of the executions of Connolly and of MacDonagh, the subject of his well-known lament ―

He shall not hear the bittern cry

In the wild sky, where he is lain … 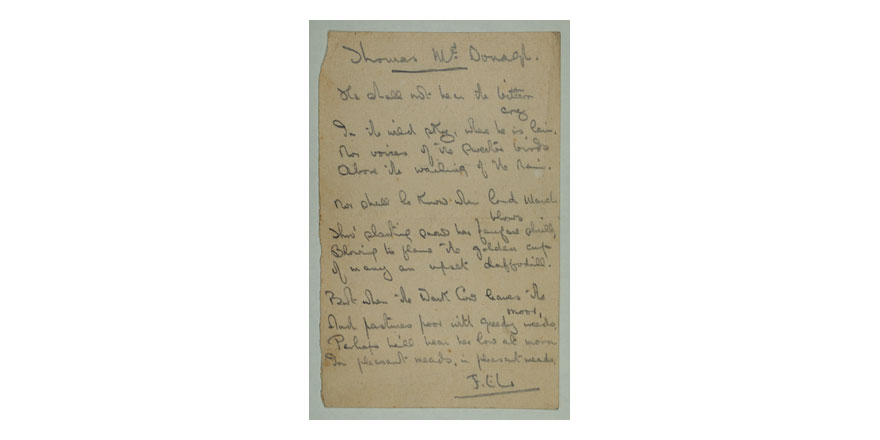 ― and another poem, ‘O’Connell Street’ reflects on the Rising:

A noble failure is not vain,

But hath a victory its own … 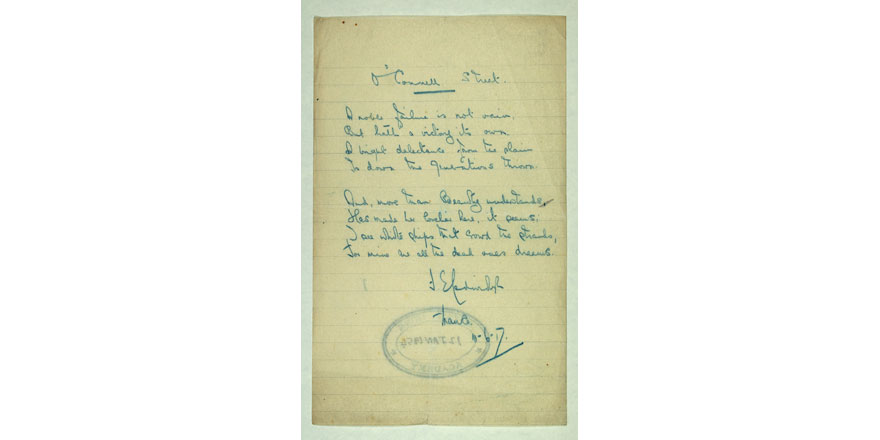 Court-martialled for insubordinate talk and overstaying his leave, Ledwidge’s poem ‘After Court Martial’ is revealing of his state of mind at this time ―

My mind is not my mind, therefore,

I take no heed of what men say,

I lived ten thousand years before

God cursed the town of Nineveh.

The Present is a dream I see

Of horror and loud sufferings …

Ledwidge was posted to Amiens in December 1916. In 1917 he sent several poems from the Front back to Ireland. These were donated to the Academy in January 1954 by their owner, Lil, Bean Ui Thuama ─ RIA MS 23 K 44. Included are a version of the aforementioned ‘O’Connell Street’, and the wistful ‘Stanley Hill’―

On Stanley Hill the bees are loud

And loud a river wild,

And there, as wayward as a cloud,

I was a little child.

I knew not how mistrustful heart

Could lure with hidden wile,

And wound it in a fateful part

With dark and sudden guile.

And yet for all I’ve known and seen

Of Youth and Truth reviled,

On Stanley Hill the grass is green

And I am still a child. 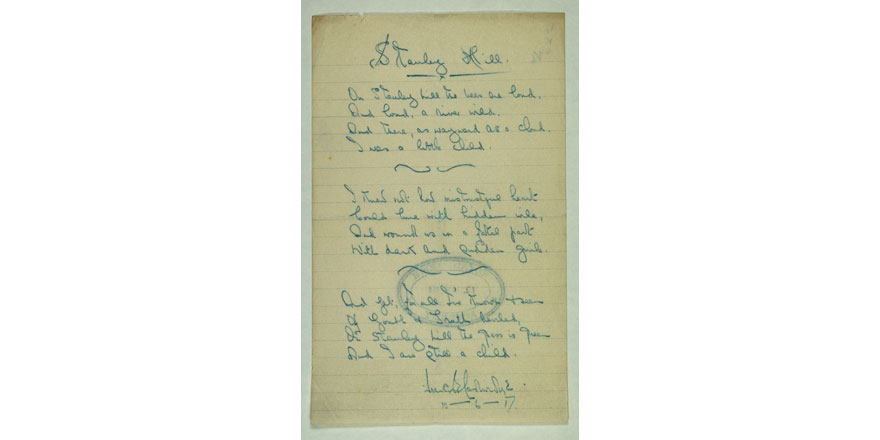 Francis Ledwidge’s war ended at Paesschendaele on 31 July 1917. He was buried in Artillery Wood cemetery at Boezinge.

And where the earth was soft for flowers we made

A grave for him that he might better rest.

So, Spring shall come and leave it sweet arrayed,

And there the lark shall turn her dewy nest.[ii]

Biographical data is mainly based on Donal Lowry, ‘Ledwidge, Francis Edward’ in Dictionary of Irish biography (9 vols., Cambridge, CUP for the RIA, 2009).