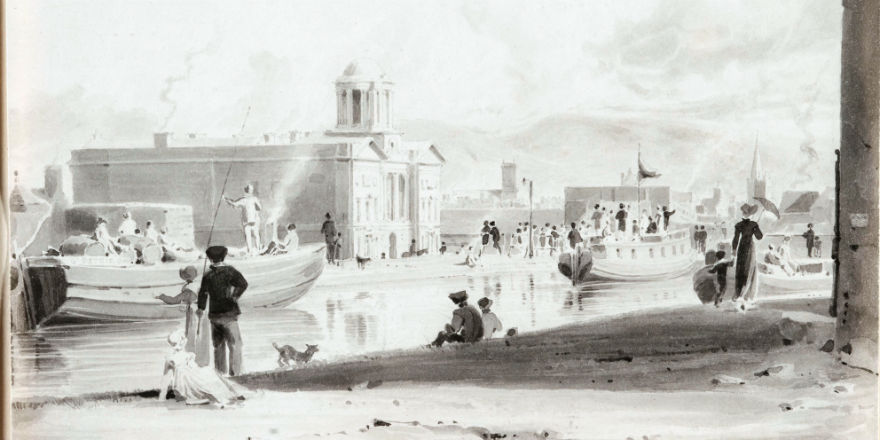 The Library's exhibition 'Views of Dublin: original watercolours by George Petrie, MRIA, 1790-1866' may have ended but you can now view it online.

In February 2016 the Library exhibited a selection from its collection of 19th century watercolours by George Petrie. Also on display were several engravings of Petrie’s drawings featured in travel guidebooks to Ireland. This exhibition is now available to view online and includes the remaining watercolours that did not feature in the original exhibition, those of The New Theatre Royal Dublin, Parliament House, College Green, The Pro-Cathedral (St. Mary's) and a View of Dublin from the North. The images depict well known landmarks and areas of Dublin and its surroundings, including Nelson's Pillar on Sackville Street (O’Connell Street), the Custom House and Monkstown Castle. Petrie’s views include figures, bringing his scenes to life. Look out for the two scholars in College Green bedecked in robes and mortarboards, and the soldiers in their uniforms at Dublin Castle. Petrie’s watercolour of Christ Church Cathedral is of particular interest as it shows the Cathedral before it was renovated in the 1870s.