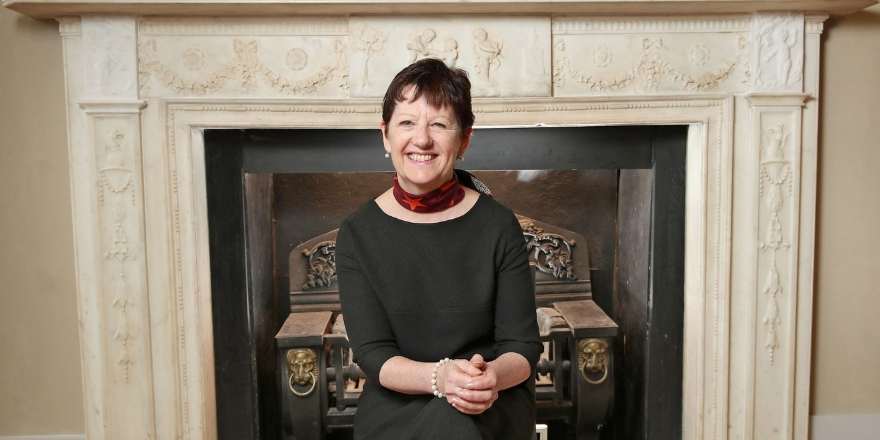 Professor Casey argues for the role of creative craft skill as a primary agent in architectural production, and for a reframing of craftsmanship as a tangible exemplar for a dangerously cerebral society.

Christine Casey MRIA, is professor in Architectural History at the Department of History of Art and Architecture, Trinity College Dublin

Since childhood I have been absorbed by the structures that human beings make in the world, from the kerbstones of Newgrange to the rubble walls of demesne, farmyard and field that frame and fragment the rural landscape. Great buildings and small opened a way to the past as vivid and enduring as the rare documents that explained how and why they came into being. Architectural history was then an emerging discipline in Ireland, promoted with passion by scholars of international renown. Through their eyes, every-day, taken-for-granted buildings, such as shops, schools, banks and terraced houses became treasure troves of subtle design and ingenious workmanship. Passion engendered zeal and two decades were spent in extensive research and publication on the architecture of Ireland’s regions and capital; no street nor building beneath notice.

Throughout, a persistent interest emerged in the materiality and execution of these structures and the characteristics that distinguished them from buildings elsewhere. Why are the Georgian red-brick terraces of Dublin so consistently plain? Built without the stone stringcourses, cornices and ornaments of British cities? Why has Dublin such profuse plasterwork interiors? Why do the monumental buildings of Dublin have a significantly different colour palette from those of London, Oxford or Bath? In short, how is the material and technological history of Ireland’s cities, towns and countryside written into historic buildings, and what does this tell us about the aspirations and concerns of those who commissioned and built them?

Considering these questions ultimately led me to explore a wider positioning of Ireland’s eighteenth-century craft tradition within a British and European context, a voyage of site and archival discovery that is unfortunately inconceivable in the current restricted circumstances. These investigations revealed shared characteristics with the regions of the Holy Roman Empire in Germany, Austria, the Netherlands and Central Europe and a cohesive pan-European craft tradition that ultimately gave rise to a distinctive local practice in Ireland. Craft skills know no boundaries.

They do, however, know limitations and loss; this has particularly been so since the mid twentieth century, when traditional craft practice has been progressively displaced by mechanisation and mass production. Finished plaster board now supplants traditional plasterwork. Dwindling opportunity channelled surviving craft practice into architectural conservation, which has provided a lifeline for the maintenance both of tangible cultural heritage in the form of buildings and monuments, and the equally important intangible cultural heritage of carving, modelling, joinery, etc. The Office of Public Works, The Heritage Council, Dublin Civic Trust, the Irish Georgian Society, the Royal Institute of the Architects of Ireland, and others, actively promote the maintenance and development of traditional craft skills in architecture.

My current research contributes to this work by developing a skills-based history of eighteenth-century architecture: CRAFTVALUE (www.craftvalue.org) is an IRC Advanced Laureate project based in TCD, which focuses on the contribution of craft to the achievement of eighteenth-century classicism.—Rejected by modernism, demeaned by the conceptual ‘turn’ and too often reduced to its representative or social functions—craft skill is, I argue,  a primary agent in architectural production. In the wider context, this accords with Richard Sennett’s reframing of craftsmanship as a tangible exemplar for a dangerously cerebral society; ‘there is nothing inevitable about becoming skilled, there is nothing mindlessly mechanical about technique itself’. Reflecting a wider scholarship in artisanal and technological history, Sennett developed a compelling critique of societal failure ‘in making connections between head and hand’ and a persuasive argument for craft practice as a behavioural model: ‘prepare, dwell in mistakes, recover form’. This is not simply, to use Joseph Roth’s phrase, to ‘hang sentimental weights on the winged feet of time’, but rather to assess what is worth keeping in an increasingly challenged architectural environment. While the dominance of academic credentialism has militated against valorisation of craft apprenticeship in society, there are encouraging signs that the tide may turn.