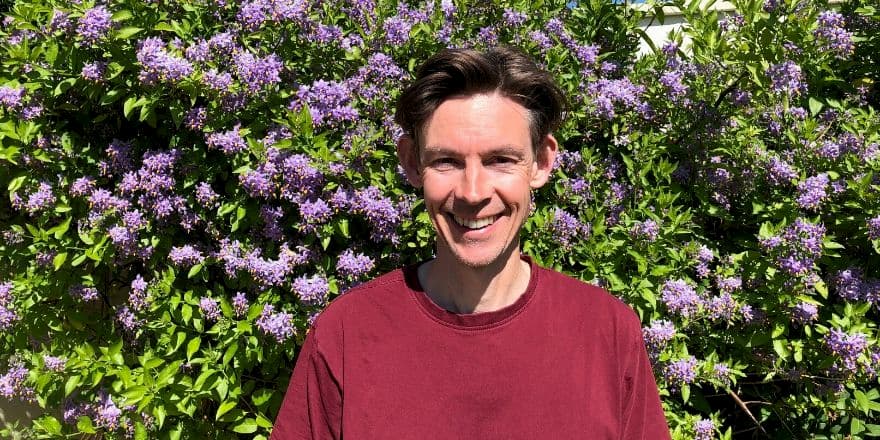 Professor Devereux's research mainly studies intergenerational transmission and the effects of family background and environmental influences on child outcomes such as education, earnings, and wealth.

I am a professor of economics at University College Dublin. I received my PhD from Northwestern University and then worked at UCLA before coming to UCD in 2005.

My research mainly studies intergenerational transmission and the effects of family background and environmental influences on child outcomes such as education, earnings and wealth. Here, I describe some recent work (undertaken jointly with Judith Delaney) that has focused on third level education in Ireland. Links to this and my other research can be found at https://ideas.repec.org/e/pde187.html

In this study (Delaney and Devereux, 2019), we examine the gender gap in the study of STEM subjects (science, technology, engineering and mathematics) at third level in Ireland, using data on student choices provided by the Central Applications Office (CAO). We find a large gender gap in the percentage of applicants opting for a STEM course as their first preference, with just over 40% of males listing a preference for a STEM course compared with roughly 19% of females. As Fig. 1 shows, the gender gaps are small for sciences and mathematics but very large in technology and engineering. Gender differences in enrolment into STEM courses are similar to gender differences in first preferences for course selection.

Fig. 1: The proportion of applicants ranking a STEM college course as first preference 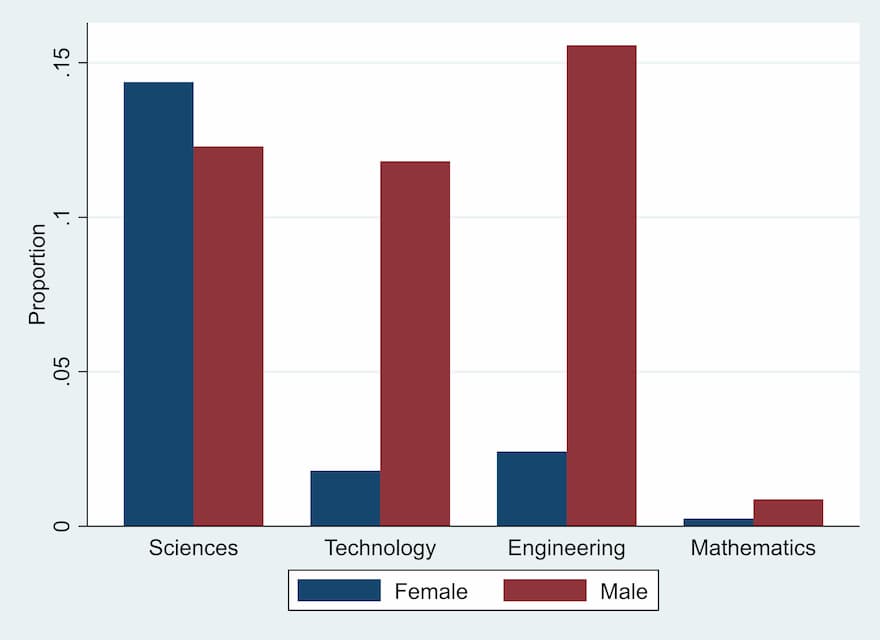 When we look for reasons for the gender gap in STEM, we find some role for comparative advantage (compared to males, females score relatively better in English than in mathematics, and higher grades in mathematics relative to English strongly predicts STEM choice). We find that subject choices in post-primary school are, however, the most important predictor of the gender gap. While this may partly reflect the differing subjects that are available in girls’ versus boys’ schools, our finding of similar subject-choice differences in mixed-gender schools suggests that availability of subjects is not an important consideration. Boys are much more likely to do physics, design graphics, engineering, building construction, and applied mathematics in school; subjects that are strongly predictive of later doing STEM courses in college. So, even two years before college entry, there are systematic gender differences in decision-making that lead to boys being more likely to choose STEM subjects.

Strikingly, we find that there remains a STEM gender gap of 9 percentage points even for persons who have identical preparation at the end of post-primary schooling (in terms of both subjects studied and grades achieved). Clearly, there are systematic gender differences in the tendency to list STEM courses even amongst academically observationally equivalent boys and girls. These differences could be influenced by biological or cultural factors, socialisation, role-model effects, peer effects, expectations of future discrimination, job preferences and many other factors; understanding these better will be an important objective of future research.

College application behaviour and the persistence of educational advantage

In another study (Delaney and Devereux, 2020), we use CAO data to study differences in college application behaviour between students from disadvantaged versus advantaged post-primary schools. Ireland provides an interesting laboratory for this analysis as applicants use a single centralised application process to provide a preference-ordering of college programmes. College admission depends almost completely on grades in the Leaving Certificate examinations. Thus, we can compare the applications of students who have equal chances of admission to college programmes. We study differences in application behaviour between students from disadvantaged schools (called DEIS schools) and students from fee-paying schools, which largely educate students from high-income families.

We find that there are systematic differences in application behaviour among students with the same college opportunities. Students from more advantaged schools are more likely to list a university programme as first preference and more likely to list programmes in which entrants have high median points. These differences are present throughout the achievement distribution (as measured by Leaving Certificate points), not just for high achievers (Fig. 2). 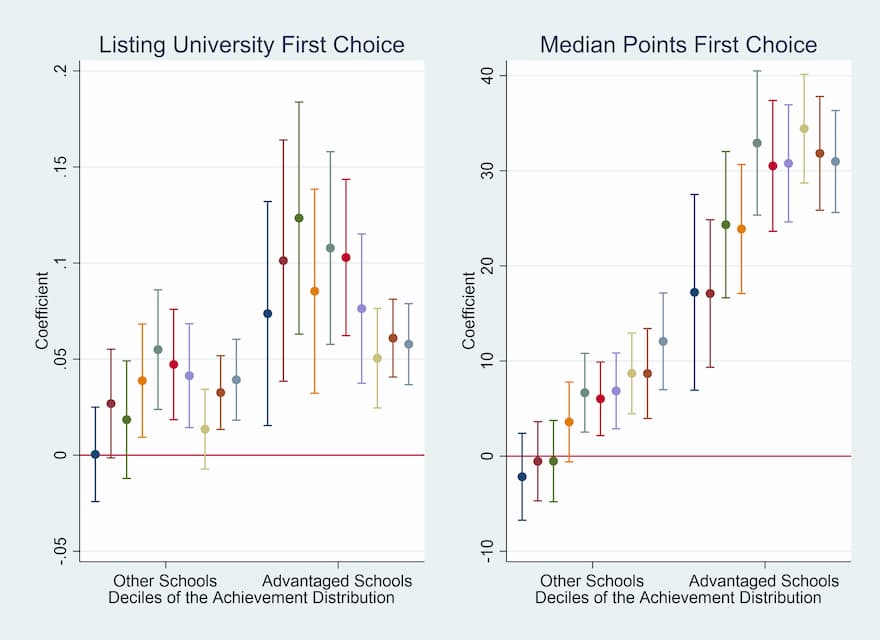 These findings are largely unrelated to differences in field of study preferences. One partial explanation, however, is geographic location: advantaged schools are more likely to be located close to universities. Taking account of this factor reduces the size of the effects of school advantage on college choice rankings, but they remain large. We conclude that, while geography matters, it is not just geography that determines gaps in college choice behaviour between students in advantaged and disadvantaged schools.

Importantly, we find that enrolment gaps are smaller than differences in application behaviour; the relatively meritocratic admissions system based on Leaving Certificate achievement undoes much of the difference in application behaviour between students from advantaged and disadvantaged schools. A large gap in programme selectivity remains, however, for the highest achievers (Fig. 3).

Fig. 3: Application and enrolment by quartile of achievement 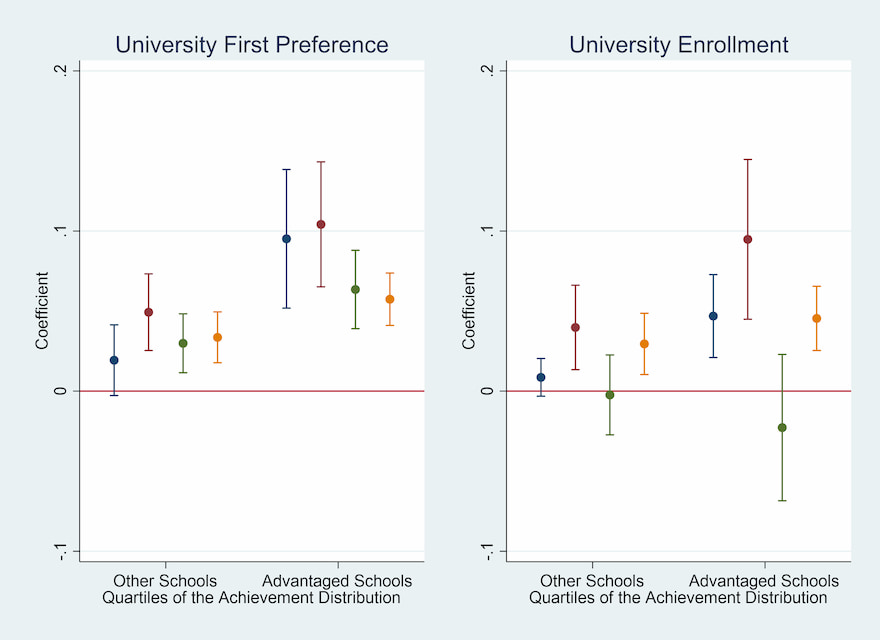 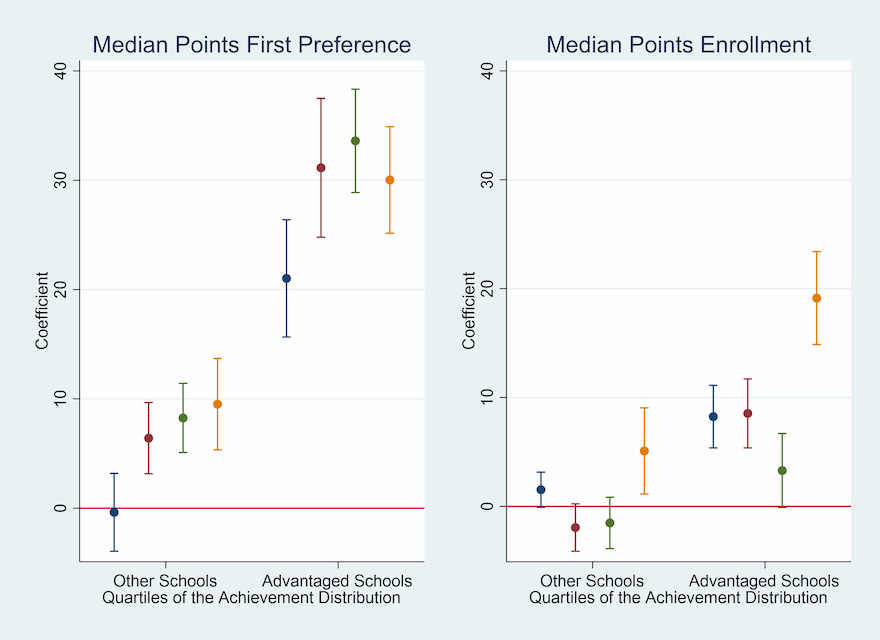 Overall, we conclude that despite the relative simplicity and transparency of the centralised application process, there are meaningful differences in application behaviour across students who have similar college opportunities but come from schools with different levels of advantage. The centralised admissions system undoes some, but not all, of these effects, so differences in application behaviour translate into substantial differences in enrolment patterns. These enrolment differences have implications for intergenerational inequality in educational outcomes and for subsequent labour-market earnings. The findings may also suggest a potential role for information provision and application assistance to encourage students from disadvantaged schools to aim higher when applying for college.