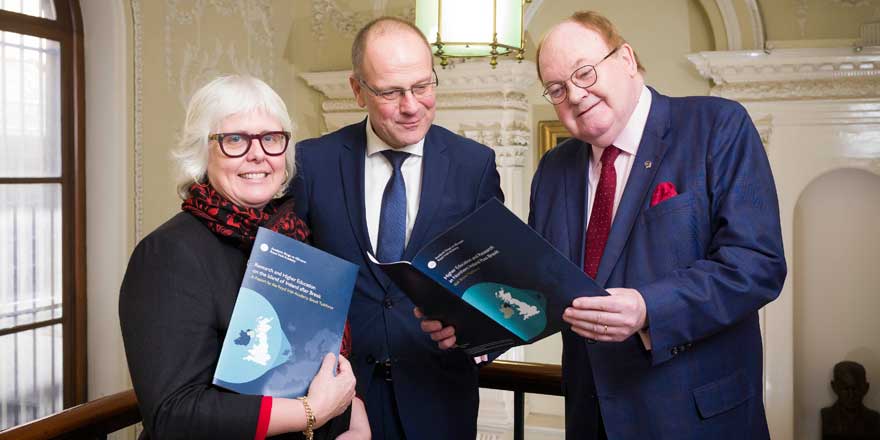 The co-chairs of the RIA Brexit Taskforce were delighted to present the RIA Brexit reports to Commissioner Tibor Navracsics on the 13th of December in Academy House.

The Co-chairs, Professors Jane Ohlmeyer, MRIA and Gerry McKenna, MRIA, outlined the key findings of the reports to the Commissioner and discussed their concerns regarding the potential impact of Brexit on higher education and research. The Minister for European Affairs, Helen McEntee T.D. also attended the meeting and discussed the Irish Government perspective on these issues.

The reports outline the strategic priorities for higher education and research in Ireland post-Brexit and are available here.

In March 2017 the RIA established a high-level Brexit Taskforce to consider the likely implications of the United Kingdom’s decision to exit from the European Union for higher education and research across the island of Ireland. The Taskforce, co-chaired by Professor Jane Ohlmeyer, MRIA and Professor Gerry McKenna, MRIA, was composed of two Working Groups exploring sector-specific concerns and challenges arising from Brexit for the Irish and Northern Irish higher-education systems.

The taskforce published a set of survey results in June 2017 and a data factsheet in October. They used this research, plus extensive stakeholder engagement and consultations, to write complementary reports on the impact of Brexit on research and higher education on the island as a whole and also a report that looks more specifically at the issues facing Northern Ireland.

The reports are available to read here