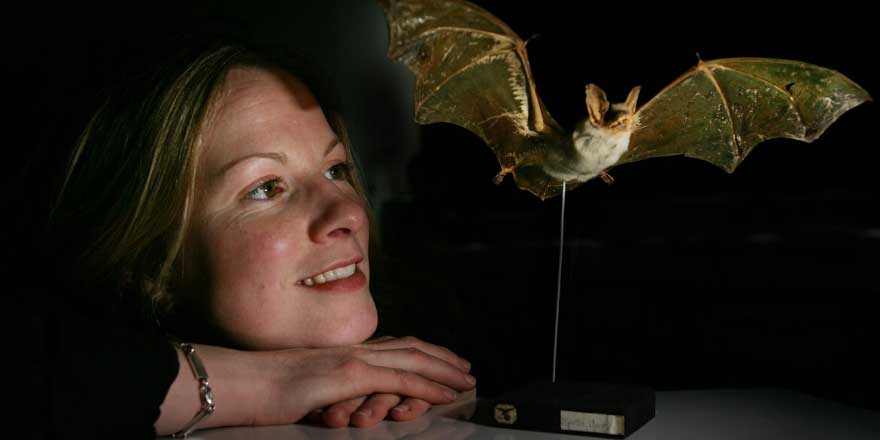 How do we study bats and rats to find the secret of everlasting youth?

If you missed our Academy Discourse where Professor Emma Teeling, MRIA talks about her research into what bat genetics can teach us about human disease and aging, you can hear it now.

This Academy Discourse held on Tuesday, 1 October 2019 was the first in the 2019-20 Discourse Series sponsored by Mason Hayes & Curran.

Living mammals (~5,400 species) originated approximately 217-238 Million Years Ago, inhabit every biome on Earth, and are arguably one of the most phenotypically diverse group of vertebrates. From the largest, 170 ton blue whale, to the smallest, 2 g flying, echolocating bumblebee bat, the huge diversity and extraordinary adaptive radiations in mammalian form and function have fascinated evolutionary biologists for centuries. Increasingly, this environmental niche specialisation is reflected in animal genomes and studying the molecular mechanisms that are responsible for this vast diversity has allowed some of the greatest insights into the functioning and evolution of our own genome. Exploration and harnessing of this vast diversity is now possible due to the development of state-of-the-art next generation sequencing technologies, which enable the ‘parallel’ sequencing of up to one billion base pairs per day at a comparably low cost.

How do we take this new knowledge to find solutions to our own problems? How can the genome of a bat or a rat enable us find a cure for cancer or slow down ageing? Does nature hold solutions to human problems and how do we uncover these solutions? All of these questions will be addressed by showcasing how studying our most unique mammals, using state-of-the-art genomic technologies coupled with traditional field studies, can uncover how to live healthier longer and other secrets.

Professor Emma Teeling is an international leader in the cross-cutting fields of mammalian phylogenetics and comparative genomics, with particular expertise in bat biology. She established the Laboratory of Molecular Evolution and Mammalian Phylogenetics in 2005 at University College Dublin; is the Founding Director of the Centre for Irish Bat Research (2006-2019); and, the newly appointed Head of Zoology (2018-present). She has developed a unique, world-leading research programme, where she integrates cutting-edge molecular technology with whole animal wildlife studies to elucidate the molecular basis of evolutionary novelty and biodiversity. She utilises this new found understanding to benefit society, both from an environmental and human health perspective. Since 2005 she has been awarded and managed >5.2M euro in research grants, including three of the most competitive personal grants: European Research Council (ERC) Starting grant (2013-2018), a Science Foundation Ireland (SFI), President of Ireland Young Researcher Award (2006-2012) and recently an Irish Research Council (IRC) Consolidator Laureate Award (2018-2022), awarded solely for scientific excellence and originality. In recognition of her scholarship and research excellence she has been awarded a Chevalier des Palmes Académiques, (2017) by the French Government and elected to the Royal Irish Academy (2016). Professor Teeling is dedicated to raising public awareness of science. Through her online TEDx talk 'The Secret of the Bat Genome', she has reached an audience of >525,718 people.