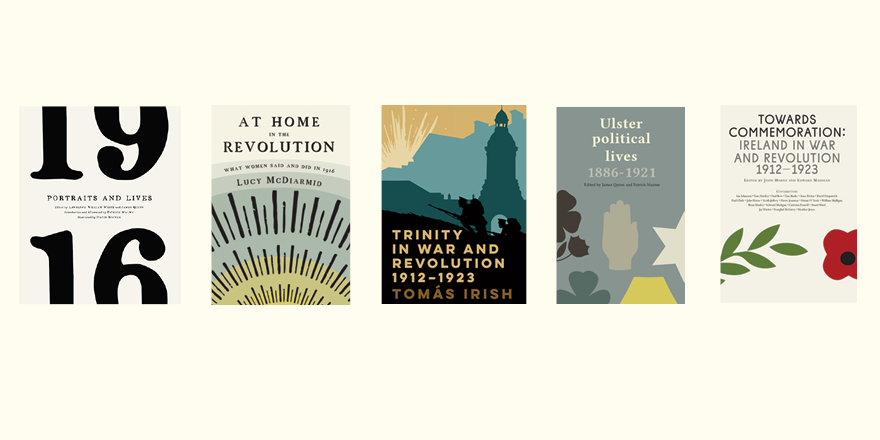 Easter 1916 changed Ireland. As we approach Easter, we are offering our commemorative books and prints at a discounted price. As the Academy remains closed to protect the public, your orders will be processed as soon as we reopen. If you can't wait to read the titles on offer, you can purchase the eBooks now.

1916 Portraits and Lives, edited by James Quinn, and Lawrence William White, with illustrations by David Rooney.
This book is a selection of 40 articles from the Royal Irish Academy’s Dictionary of Irish Biography, dealing with 42 men and women whose careers, in one way or another, were deeply involved with the Easter rising of 1916.

At home in the Revolution: what women said and did in 1916, by Lucy McDiarmid.
This book derives its material from women’s own accounts of the Easter Rising and shows how issues of gender were negotiated in a time of revolution.

Trinity in war and revolution, by Tomás Irish.
This book situates the history of Trinity College Dublin within the great upheavals and changes that were taking place in Ireland and the wider world in the transformative period between 1912 and 1923.

Ulster Political Lives, 1886-1921, edited by James Quinn and Patrick Maume.
This book examines the lives of 50 of Ulster's most significant political figures in the turbulent period from the first Home Rule Bill of 1886 to the foundation of the state of Northern Ireland in 1921.

Towards Commemoration: Ireland in war and revolution, 1912-1923, edited by John Horne and Edward Madigan.
This book offers an array of new views in the incendiary debate on how to remember a divided past.

1916 prints by David Rooney.
The prints include 42 portraits and 3 landscape scenes from the book 1916 Portraits and Lives.

We hope this will help keep you busy, informed and engaged until things get back to normal.