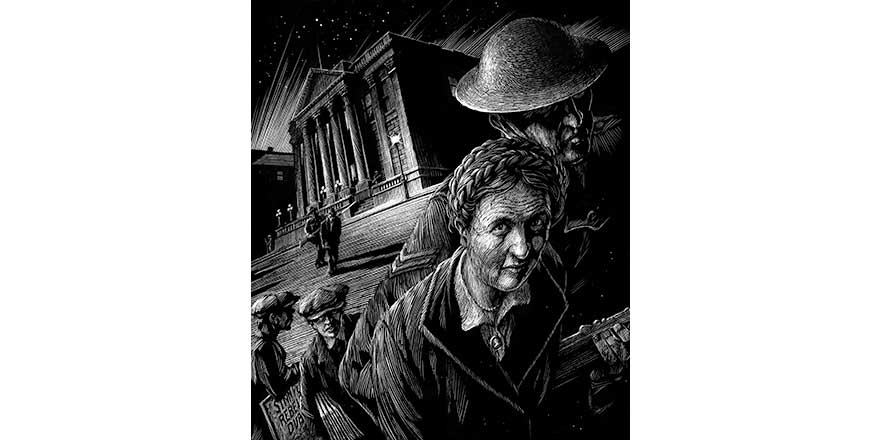 Kathleen Lynn (1874–1955), medical practitioner and political activist, was born 28 January 1874 in Mullafarry, near Cong, Co. Mayo, second oldest of three daughters and one son of Robert Lynn, Church of Ireland clergyman, and Catherine Lynn (née Wynne) of Drumcliffe, Co. Sligo. Despite aristocratic relations and a comfortable upbringing, her professional career was primarily concerned with the less well-off. Lynn's Mayo childhood, where poverty coincided with land agitation, may have motivated her to seek political and pragmatic solutions to socio-economic deprivation. After education in Manchester and Düsseldorf, she attended Alexandra College, Dublin. She graduated from Cecilia Street (the Catholic University medical school) in 1899, and, after postgraduate work in the United States, became a fellow of the Royal College of Surgeons in 1909. She was refused a position in the Adelaide Hospital because of her gender, and eventually joined the staff of Sir Patrick Dun's Hospital. Valuable experience was also gained at the Rotunda Lying-In Hospital. From 1910 to 1916 she was a clinical assistant in the Royal Victoria Eye and Ear Hospital, the first female resident doctor at the hospital, but was not allowed to return after the 1916 rising. Her private practice, at 9 Belgrave Road, Rathmines, was her home between 1903 and 1955.

An active suffragist and an enthusiastic nationalist, Lynn was greatly influenced by labour activists Helena Molony, Constance Markievicz, and James Connolly. Her work in the soup kitchens brought her into close contact with impoverished families in Dublin during the 1913 lock-out of workers. She joined the Irish Citizen Army and taught first-aid to Cumann na mBan. As chief medical officer of the ICA during the 1916 rising, she tended to the wounded from her post at City Hall, and her car was used for the transportation of arms and for Markievicz to sleep in. Imprisoned in Kilmainham, with her close friends Helena Molony and Madeleine ffrench-Mullen, she complained bitterly about the cramped prison conditions. A committed socialist, she was an honorary vice-president of the Irish Women Workers' Union in 1917 and denounced the poor working conditions of many women workers. She was vice-president of the Sinn Féin executive in 1917, and her home was a meeting point for fellow Sinn Féin women, notably for meetings of Cumann na dTeachtaire (the league of women delegates). On the run between May and October 1918, she was sent to Arbour Hill detention barracks when arrested. The authorities agreed to release her, on the intervention of the lord mayor of Dublin, Laurence O'Neill, as her professional services were essential during the 1918–19 influenza epidemic. Despite her high political profile, Lynn is remembered, primarily, for her work in St Ultan's Hospital for Infants on Charlemont St., which she established in 1919 with her confidante, Madeleine ffrench-Mullen. Its philosophy was to provide much-needed facilities, both medical and educational, for impoverished infants and their mothers.

Though she was active in south Tipperary during the war of independence, Lynn's national prominence faded after the heady 1913–23 period. In 1923 she was elected to Dáil Éireann as Sinn Féin candidate for Dublin county on the anti-treaty side, but did not take her seat. She failed to retain her seat in the June 1927 election but was an active member of Rathmines urban district council between 1920 and 1930. She commented regularly on public-health matters such as housing and disease prevention. As council member of the Irish White Cross she endeavoured to help republicans and was very critical of the newly formed Irish Free State's attitude to anti-treatyites. At St Ultan's, Lynn fostered international research on tuberculosis eradication. In 1937, through the efforts of her colleague Dorothy Stopford-Price, the hospital introduced BCG (Bacillus Calmette-Guerin) inoculation, which prevented TB. She also encouraged links with US and continental medical practitioners. Ffrench-Mullen and Lynn visited the United States in 1925 to raise funds for St Ultan's and visit paediatric institutions. Lynn's interest in child-centred education was furthered in 1934 when Dr Maria Montessori visited St Ultan's.

Throughout her life Lynn preached the virtues of cleanliness and fresh air. She was involved with An Óige (a youth organisation) and gave them her cottage in Glenmalure, Co. Wicklow (which she had previously lent to Dorothy Macardle for the writing of The Irish republic). Lynn's friend, the architect Michael Scott, designed a balcony outside her bedroom, where she slept for most of the year. A devout member of the Church of Ireland, she worshipped regularly at Holy Trinity church, Rathmines, but often criticised the Christian churches for losing sight of Christ's original teaching. After World War II, she was vice-chairman of the Save the German Children Society. She died on 14 September 1955 at St Mary's Nursing Home in Dublin and was given a full military funeral. Remembered primarily for her socio-political activism, she was part of a generation of women who were politicised in the 1910s and who devoted their later careers to maternal feminism. A portrait by Lily Williams is in the Royal College of Physicians, Ireland.

Kathleen Lynn features in 1916 Portraits and Lives, edited by James Quinn and Lawrence William White, and illustrated by David Rooney. Special exhibition offer: €20 (RRP €30). A limited edition print of Kathleen Lynn, numbered and signed by the artist, is also available to purchase at the special price of €60 (RRP €125). Offer ends 8 March.