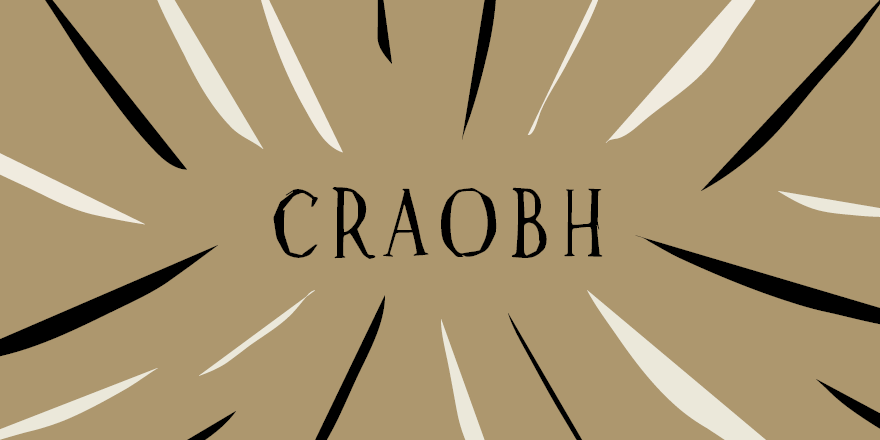 From the cutting room floor: A history of Ireland in 104 words

Celebrating the reprint of our book with some bonus words. No. 104: Craobh: branching out

Certain entries were written for our recently published A history of Ireland in 100 words but for one reason or another were not used in the final version of the book. Here, the authors return to craobh, a bonus ‘104th word’.

Craobh is primarily the bough of a tree, but like English 'branch' the word can signify any − literal or figurative − offshoot from a central core. Irish craobh is commonly used in genealogies to denote a particular branch of a family, and it can be combined with scaoileadh 'scattering' to give craobhscaoileadh, a term which served originally to refer to the wide descent or dispersal of peoples.

By the end of the seventeenth century, craobhscaoileadh was being used also to discuss the dissemination of information. Early examples appear mostly in religious contexts and Modern Irish craobhscaoileadh is still used with words like soiscéal and creideamh to mean 'spreading the gospel' or 'propagating the faith'. In media, craobhscaoileadh once meant ‘broadcasting’, but this has been superseded now by craoladh, a relatively recent verb which originally meant ‘announce’.

When applied to people, craobh has overwhelmingly positive connotations. It functions as a complimentary term for both men and women in some of our earliest sources and St Brigit, for example, is fondly identified as in chróib co mbláthib 'the blossoming branch'. In modern times, Douglas Hyde, the first President of Ireland (1938-45), published verse in Irish under the pseudonym An Craoibhín Aoibhinn 'The Lovely Little Branch'.

Such allusions form part of a long-standing tradition in Irish of using terms for trees metaphorically to refer to a person. The implication, of course, is that the person possessed the qualities valued in the tree such as the ability to offer shelter and support, and to produce sustenance for life. Bile, often an ancient or venerated tree, crops up in phrases such as bile Banba, meaning 'hero of Ireland'. In the early seventeenth century, another alliterating phrase, doss díten 'tree of protection', was used in praise of Hugh O’Neill, Earl of Tyrone, who left Ireland for mainland Europe as part of the so-called Flight of the Earls.

Having come this far, we might ask why the All-Ireland Championship is expressed in Modern Irish using the phrase Craobh na hÉireann. In ancient Greece and Rome, winning athletes were presented with palm branches or wreathes of laurels to mark their victory and from this we get the English phrase ‘don’t rest on your laurels’, that is, ‘don’t become complacent because of your past victories’. In early Irish pailm ‘palm’ is used in a similar way, but the modern language relies on Craobh na hÉireann ‘the Branch of Ireland’ to bring home the past victories of Greece and Rome.