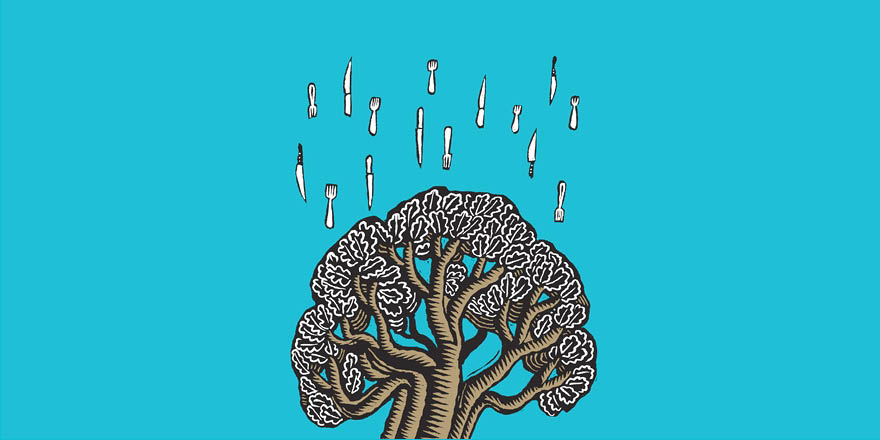 Inside 'A history of Ireland in 100 words': Fliuch

Why might you need a helmet on a rainy day in Munster? Find out in today's entry on the penetrating misery of an Irish downpour.

To celebrate Seachtain na Gaeilge we're letting you take a peek inside our book A history of Ireland in 100 words. Today's entry is fliuch.

Ireland has a maritime climate, influenced by the Atlantic Ocean, which ensures that the weather is mild and also wet. Rainfall is common in all parts of the island but is particularly prevalent in the west, where the average number of ‘wet’ days in a year, that is, those with more than 1mm of rain, is around 225. To assist those wishing to describe and forecast the weather, in 2014 the Daily Edge website proposed that the ‘Fliuch Scale’ be implemented, fliuch being the Irish word for ‘wet’. It was envisaged that this would work like the Richter Scale but would go all the way up to 11.

Anecdotal evidence—largely supported by scientific studies such as dendroclimatology —suggests that, in the Middle Ages Ireland experienced a good deal of rain as well. Writing in the twelfth century, Gerald of Wales observed in Ireland ‘a plentiful supply of rain, such an ever-present overhanging of cloud and fog, that you will scarcely see even in summer three consecutive days of really fine weather’. Extreme wet weather was a concern, of course, owing to its potential impact on crops and livestock and to the food-shortages that could result. Under the year 900, the Annals of Ulster record ‘a rainy year … great scarcity affected the cattle’, and the Annals of the Four Masters note that produce was destroyed in 975 because of an abundance of rain.

In the Annals of Ulster, the rains of 900 are documented in Latin (pluuialis annus), but the Four Masters use the Irish word fleochud  ‘rain’, which derives from fliuch, and so means literally ‘wetting’. Báisteach, which seems to show the influence of terms for both ‘baptising’ and ‘drowning’, is the usual word for ‘rain’ in some dialects today, but throughout the medieval period, fleochud and its alternative flechud were more frequently used. Echoing the widely held belief that the rule of a good king was reflected in the clemency of the weather, ‘The book of invasions’ claimed that, during the kingship of Echu son of Erc, there was no rain (fleochod), only dew.

Another f-word existed alongside this—ferthain ‘rain’ is related to the verb feraid meaning ‘gives forth, pours’. In its modern spelling, fearthainn is still commonplace and appears in phrases such as scáth fearthainne ‘an umbrella’. Related terms also survive in expressions like cuireadh fearadh na fáilte roimhe ‘he was warmly welcomed’, which translates strictly as ‘a pouring-out of welcome was put before him’.

Employing flechud and ferthain in combination, Tadhg Ó Cianáin reported that, on 8 February 1608, ‘a kind of rain’ (gne fleachaidh agus f herthana) came on. Presumably, the weather Ó Cianáin experienced would register at the lower end of the Fliuch Scale. To express rainfall at the upper end, Irish-speakers of the past often opted simply for fleochud mór ‘great rain’. Today, Irish has an abundance of colourful ways to evoke the penetrating misery of a downpour. Fearthainn a rachadh trí chlár darach ‘rain that would go through a board of oak’ is an entertaining thought, while Munster Irish ag cur foirc agus scaena ‘raining forks and knives’ is roughly equivalent to English ‘raining cats and dogs’ but substitutes dangerous cutlery for the furry friends!