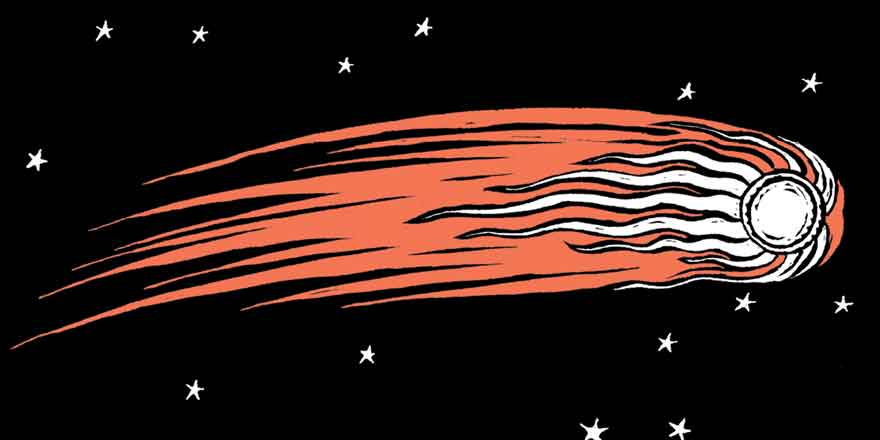 Inside 'A history of Ireland in 100 words': Ríomhaire

Did you know that Saint Columba could 'number the stars' and predict the course of the moon? Find out more in today's entry on star-counting.

To celebrate Seachtain na Gaeilge we're letting you take a peek inside our book A history of Ireland in 100 words. Today's entry is ríomhaire.

As technology evolves, languages often create novel words to label the latest developments, but sometimes an old word is so close in meaning that it can be applied to the new invention. The computer is a twentieth-century innovation for which Irish speakers adopted the term ríomhaire. Paradoxically, this word has a very long pedigree stretching back to the Old Irish period. Of course, it did not refer to a machine at that time but a human—someone who performed calculations.

From ancient times, people have been concerned with the observation of the movement of the planets and stars: the great megalithic tomb at Newgrange, Co. Meath, for example, is directly aligned with the rising sun on the winter solstice. With the arrival of Christianity, a new science of computistics (Latin computus) was introduced to Ireland, which, along with interpretation of the Bible and Latin grammar, formed the foundation of an ecclesiastical education, and the Irish quickly became leading thinkers in the area. Practitioners of computus were known in the Irish language by the term rímaire, which is exactly the same word as modern ríomhaire. We now tend to translate rímaire as ‘computist’ rather than ‘computer’ in order to make it clear that we are not dealing with a mechanical or electronic device, but the rímaire was definitely a computer—someone who computes.

Many great ecclesiastics were associated with computistics. ‘The eulogy for St Columba’ tells us that Columba studied the course of the moon and ‘could number the stars of heaven’ (rímfed rind nime). The movement of the moon was particularly important because Easter was calculated relative to the full moon following the spring equinox.

This generated significant mathematical problems, partly because a lunar month (the time it takes to move from one full moon to the next) is shorter than a solar month, twelve lunar months being about eleven days shorter than a solar year. The English ecclesiastical scholar Bede, who died in 735, describes the duration of the lunar month as 29½ days, but Irish scholars of the period calculated that the natural cycle would require the addition of a further four moments, 1/12th of a moment, and 1/47th of 1/12th (that is 1/564th) of a moment. While this more precisely corresponded to the actual duration of the lunar month, one Irish computist acknowledged that it is ‘laborious’ and that Bede’s calculation was more practical. Computistics lay at the heart of a vicious controversy regarding the date of Easter that engulfed the Irish church in the seventh century, with some churches following the system determined by Rome, while others retained an older method of calculation.

Computists were also called upon to determine the passage of historical time. The medieval Church divided the history of the world into Six or Seven Ages, beginning with the Creation. The Fourth Age began with the reign of the biblical King David, and one copy of the ‘Royal succession’ tells us that computists (rímairi) disagreed about its duration, some saying that it lasted 473 years while others argued that it was 373 years.

A more important calculation still was the date of Creation. An alternative to the now common Anno Domini (ad) dating was Anno Mundi ‘in the year of the world’, that is, the number of years since Creation, but the age of the world was much disputed. One seventeenth-century Irishman, James Ussher, Archbishop of Armagh, made a significant contribution to scientific knowledge of the time when he famously determined Creation to have occurred 4004 years before the birth of Christ, a figure still adhered to by many biblical creationists. Back then, the age of the Earth had to be calculated chiefly from the ages of various individuals in the Bible stretching back to Adam, and so it was severely limited. Modern estimates of the age of the Earth place its origins at approximately 4.54 billion years.