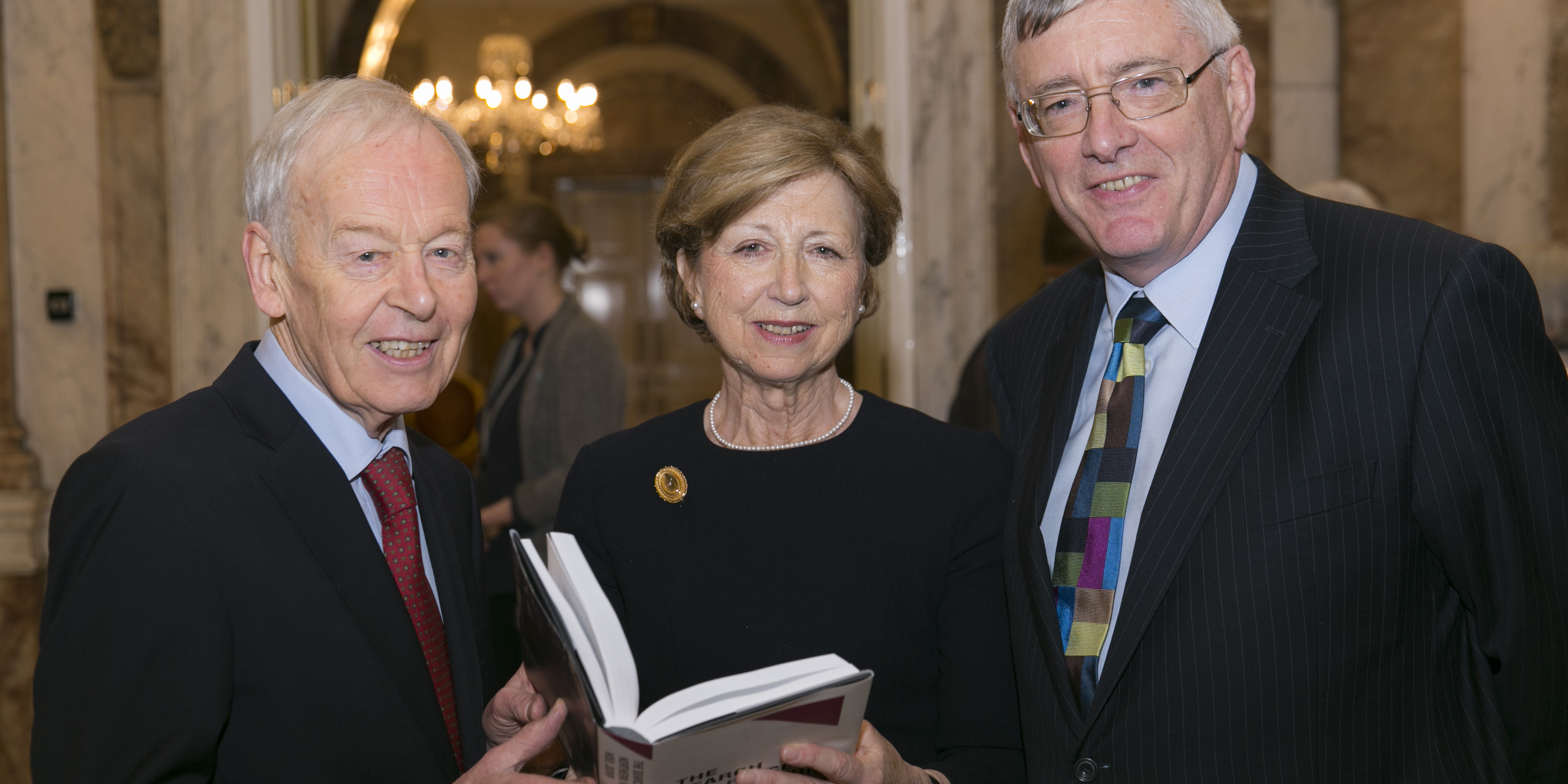 A book that is timely and timeless: renowned journalist Olivia O'Leary launched our latest publication on 22 November.

Sunningdale: The search for peace in Northern Ireland, a new Royal Irish Academy publication by Noel Dorr, a former Irish diplomat, was launched on 22 November in Iveagh House. Bobby McDonagh, the Deputy Secretary of the General, Policy and Communication Division at the Department of Foreign Affairs and Trade, Olivia O’Leary, renowned journalist, writer and current affairs presenter and Noel Dorr spoke at the event to key themes of the book: the groundwork which the Sunningdale conference laid for subsequent peace negotiations, the implications of these discussions on ideas of nation and community and their ongoing relevance today.

Launching Dorr’s Sunningdale, Olivia O’Leary began by describing how “we get to see history in different ways.” Sunningdale, she said, ““isn’t about the what-ifs of history. It’s much more a tracking of the development of policy on Northern Ireland. A policy which was kick started from the cobwebs of anti-partitionism when Northern Ireland exploded in the late 60s and early 70s.” In December 1973, leaders of the British and Irish governments and of the Ulster Unionist Part (UUP), the Social Democratic and Labour Party (SDLP), and the Alliance Party of Northern Ireland (APNI), reached a settlement aimed at bringing peace to Northern Ireland, in Sunningdale Park, Berkshire, England. The Irish government, for the first time, declared that there could be no change in the status of Northern Ireland until a majority of the people of the area desired it; the British government declared that if the majority indicated a wish to become part of a united Ireland they would support that wish; and all the participants agreed on new political institutions to promote cooperation and reconciliation within Northern Ireland and between both parts of the island. At the launch, Noel Dorr, described Sunningdale as the “first serious attempt to deal with the real complexity of the Northern Ireland problem”. Although Sunningdale did not succeed in its immediate objective, the discussions that took place preceding, during and after the conference, were crucial in subsequent efforts to resolve the Northern Ireland conflict, including the peace achieved under the Good Friday/ Belfast Agreement of 1998.

Noel Dorr situates his new publication in terms of community. The evening of the launch, he reflected on the notion of ‘we’: “one of the things that interests me greatly is the idea of the development of the concept of ‘we’ in community. What is it that makes us talk about ‘we’ the Irish?” Citing Benedict Anderson’s concept of imagined community at the launch and in his book, Dorr speaks to the complexities of the concepts of nation and community and how this has complicated conflict in Northern Ireland. Referring to the period surrounding Sunningdale, Dorr spoke at the launch of the “two communities of that time, two senses of identity, two senses of ‘we’”. Reconciling these conflicting ideas of ‘we’ has always been at the crux of issues surrounding Northern Ireland. Indeed, in the Introduction of Sunningdale, Dorr elaborates on the tender aspect of Northern Irish relations: “It has always seemed to me, however, that it is a sense of insecurity on the part of people of both communities and the resentments, hopes and fears to which that insecurity gives rise, that has kept tensions alive and been the prime driver of conflict over several generations in the divided society of Northern Ireland.” Negotiating the desires and uncertainties of different communities in close proximities, appreciating differing senses of “we”, remains crucial to relations within Northern Ireland.

Dorr concluded his speech at the launch by asking: “is it possible for two parties with diametrically opposed views about the long-term future, to work together in the immediate future for the benefit of everybody and let each step then develop from that?” It is difficult to know, of course, but historical peacekeeping measures should speak to some sense of freedom and hopefulness. As Dorr asserted, “the freedom we gained in the early part of the century was freedom for each generation to do what it should and could do in relation to the burden of our history.” Bobby McDonagh, introducing Dorr and Dorr’s new book as “intelligent, modest, profound and elegant”, reminded us that “the two great peace processes of our time remain work in progress, especially with Brexit looming.” The relevance of historical negotiations surrounding Northern Ireland are being constantly tested and will continue to be, demonstrating history as a phenomenon of the past, as well as the present. With its attention to detail, sensitivity of language and profound discussion of the consequences of history to nation and community, Sunningdale: The search for peace in Northern Ireland is both timely and timeless.

Sunningdale: The search for peace in Northern Ireland is available through our website and in all good bookshops.