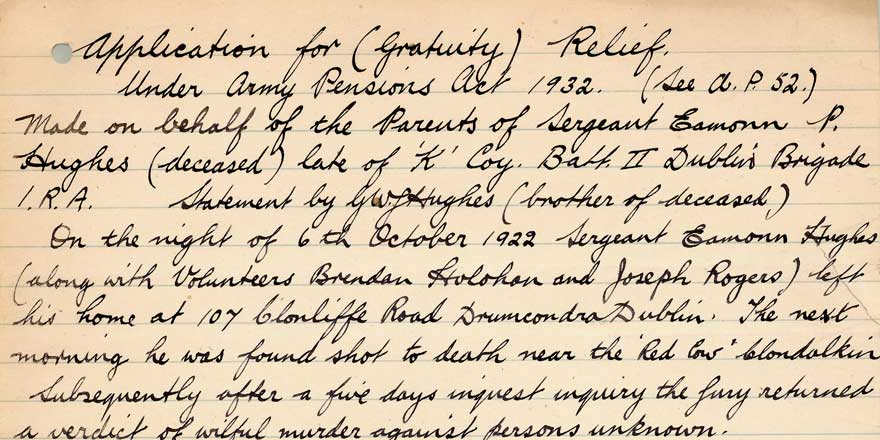 Read Anne Dolan's essay on "Trauma and the Legacy of Violence" on Century Ireland.

In collaboration with Century Ireland(link is external), we are making the 50 essays freely available online. Today's essay is by Anne Dolan and it recounts the killing of teenagers  Eamonn Hughes, Brendan Holohan and Joseph Rogers.

In the early morning of 7 October 1922 a dairyman found the bodies of two ‘respectably-dressed men’ lying on the side of Monastery Road, Clondalkin; a third was nearby on quarry land. Eamonn Hughes and Brendan Holohan had been shot multiple times, then shot again after falling to the ground. On Joseph Rogers’s body, a doctor counted sixteen wounds. These ‘respectably-dressed men’ were teenagers, sixteen and seventeen years old, identified by their families as studious, religious, hardworking; they were apprentices making their way in the world; they were coming men, the eldest with a cigarette holder in his pocket, a gold ring on his finger and a monogrammed watch on his wrist. After going out together to paste up anti-Treaty handbills, they were seen getting into a car with three National Army officers on Clonliffe Road. What happened between then and when the dairyman found them remains unclear.  Continue reading (you will be redirected to the website of Century Ireland)