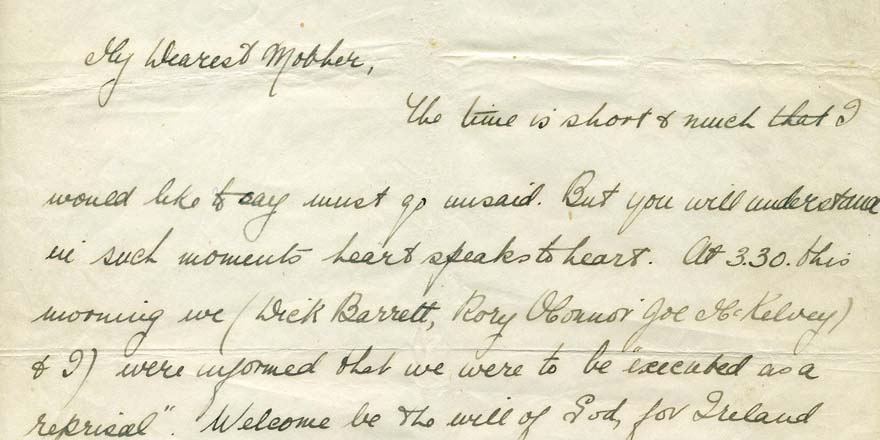 In collaboration with Century Ireland, we are making the 50 essays freely available online. Today's essay is by Seán Enright and it covers the executions which took place at Mountjoy.

The execution without trial of Rory O’Connor, Liam Mellows, Richard Barrett and Joe McKelvey on 8 December 1922 at Mountjoy Prison was one of the most notorious events of the Irish civil war. It should be understood within the context of the Irish Free State government’s execution policy, and also as part of the wider resort to executions by British governments throughout the revolutionary period. By the autumn of 1922 the financial cost of the civil war was edging the country towards bankruptcy. At the request of the Provisional Government, the National Army issued a proclamation that, after 15 October, persons ‘taken in arms’ or ‘attacking National Army troops’ would be tried by military court and ‘suffer death’. The first executions soon followed, and a legal challenge to the military courts failed.  Continue reading (you will be redirected to the website of Century Ireland)

Ireland 1922, edited by Darragh Gannon and Fearghal McGarry, is published by the Royal Irish Academy with support from the Department of Tourism, Culture, Arts, Gaeltacht, Sport and Media under the Decade of Centenaries 2012-2023 programme. Watch an address by Taoiseach Micheál Martin, T.D. to mark the publication of this book (30 November 2022).