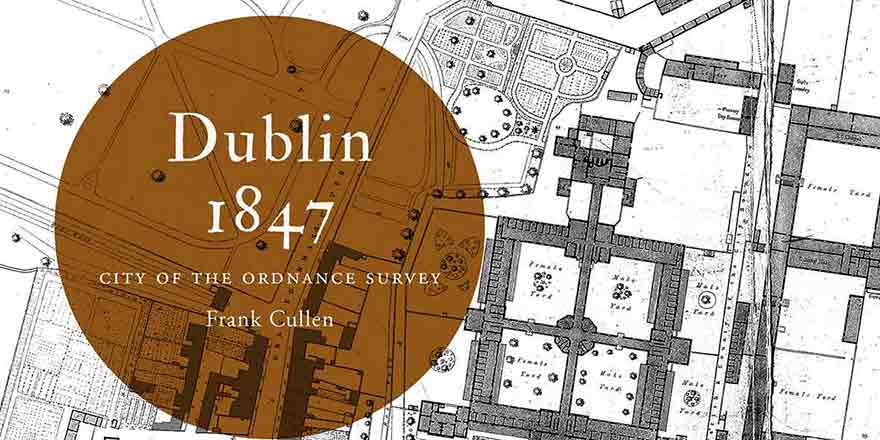 The second edition of Dublin 1847: city of the Ordnance Survey by Frank Cullen is now available to purchase on our website.

The Ordnance Survey’s large-scale town plans for Dublin (1847) are the focus of this book. Forty-five extracts from these richly detailed maps depict the streets, lanes, buildings, gardens, yards and parks of the city with precision, to the extent that individual houses (with numbers), pumps, lamp posts and trees are shown. Author Frank Cullen considers selected features and areas of the mid-nineteenth-century city through the map extracts, using other sources to discuss the elements of urban life that lie behind maps. For example, the formal layout of Merrion Square with its fine buildings and notable residents is contrasted to the densely inhabited warren of lanes behind Mount Street, just minutes away. The impact of public buildings such as the Royal (later Collins’s) Barracks is impressively evident in the plan, while the associated professional and trading activities of the surrounding area are less obvious in the unlabelled rows of buildings along Montpellier Hill and Barrack (later Benburb) Street. The maps extracts and commentaries are accompanied by contemporary illustrations; and are preceded by an introductory essay on Dublin in 1847. This is an ancillary publication to the Dublin series from the Irish Historic Towns Atlas.