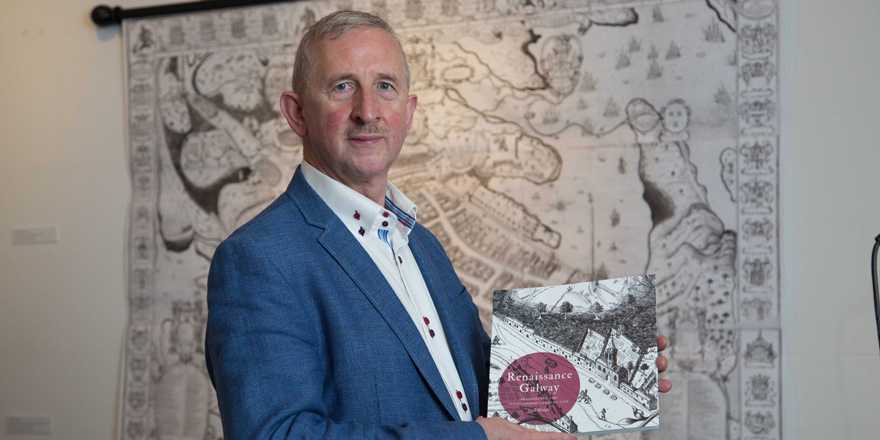 Renaissance Galway celebrated with Seminar and Launch in Galway

The pictorical map, subject of Renaissance Galway: delineating the seventeenth-century city by Paul Walsh was the subject of a seminar dedicated to the map and celebrated at the launch by Cllr Denis Lyons, Deputy Mayor of Galway in Galway City Museum on Thursday 10 October 2019.

The remarkable ‘pictorial map’ of Galway will be familiar to many and is the subject of a new book entitled Renaissance Galway: delineating the seventeenth-century city by Paul Walsh. Published by the Royal Irish Academy, Renaissance Galway was launched by Councillor Denis Lyons, Deputy-Mayor of the City of Galway in Galway City Museum on Thursday 10 October 2019. Speakers included Professor Jane Conroy, Vice President for Research, Royal Irish Academy; Jacinta Prunty, Honorary Editor, Irish Historic Towns Atlas and Maynooth University and hosted by Eithne Verling and the Galway City Museum.

Renaissance Galway presents thirty-eight extracts from the pictorial map, which offers a bird’s-eye view of the city immediately prior to its surrender to Cromwellian forces in 1652. The map records in exceptional detail the life and times of the city’s inhabitants. Each extract is carefully chosen and beautifully presented, the result of specially commissioned photography of an original in Trinity College, Dublin. The accompanying text explores the many mysteries that continue to surround this map — its compilers, purpose and origins.

To view the Irish Times descriptive video on the map with Paul Walsh filmed in Trinity College Dublin, click here.

The publication represents years of research by author Paul Walsh, who has spent his career working in Irish archaeology and has a passionate interest in the history of his native city, Galway. He was author (with Jacinta Prunty) of Irish Historic Towns Atlas (IHTA), no. 28, Galway/Gaillimh, which was published in 2016. Renaissance Galway follows on from this work and has been produced by the IHTA project. The project has been supported by Galway City Council.

The launch in Galway City Museum on Thursday was one of a number of events marking the publication of Renaissance Galway. Earlier that day NUI Galway’s Moore Institute hosted a seminar discussing the pictorial map that was organised by Daniel Carey, MRIA and Director of the Moore Institute with Paul Walsh. As part of the seminar, the other surviving copy of the map from the James Hardiman Library at NUI Galway was on display, and a panel of speakers, Sarah Gearty (IHTA), Pádraig Lenihan (NUIG), Bríd McGrath (TCD), Annaleigh Margey (Dundalk IT), Nollaig Ó Muraíle (NUIG) and author Paul Walsh described key aspects of the map.

The book was celebrated with an exhibition, lectures and launch at the 39th Milwaukee Irish Fest in August. Speaking at this event Minister Ciarán Cannon described the pictorial map as ‘the jewel in the treasure chest of the historic sources for the city’ with the publication Renaissance Galway ‘bringing to the public an in-depth interpretation of the history and evolution of this unique cartographic work of art’.