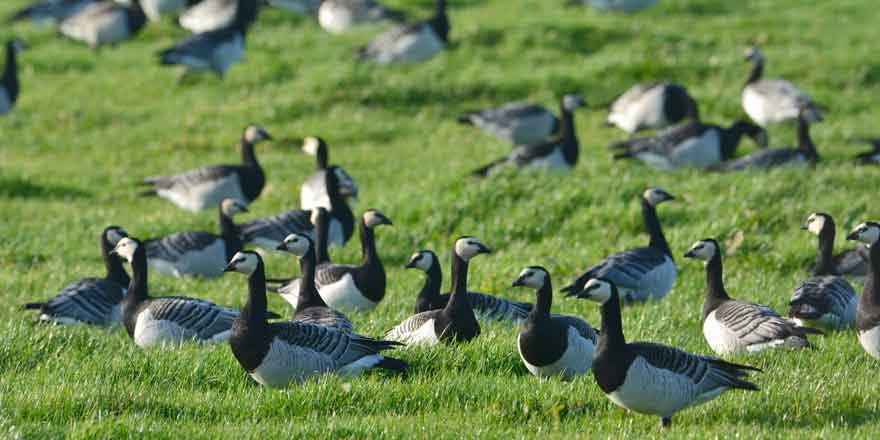 Every day during Heritage Week (15-23 August) we introduce a different bird that populates Clare Island as it features in New Survey of Clare Island, vol. 9: Birds.

Today, you can read the entry on the Barnacle Goose as it appears in Chapter Two of New Survery of Clare Island, vol. 9: Birds. Chapter Two contains an inventory of the birds of Clare Island, and this is compared with the findings of the first survey conducted during 1909–11. The list comprises records that span the period from 1887 to 2018.

Barnacle Goose Branta leucopsis (Bechstein)
Annual winter visitor in the past. Now probably a regular winter and spring visitor in small numbers (PW).
Ussher (1912) said that this species was a ‘common winter visitor in flocks’ in ‘March and April and again in September, October, and November’. Ruttledge (1950) quotes P. McMahon that ‘70 to 100 winter’.
It appears that between 11 and 100 were found on Clare Island during the winter atlas (November 1981—February 1984) (Lack 1986). However, barnacle geese were not found on Clare Island during the survey in the spring of 1988 (Walsh and Merne 1988), nor in any of the regular subsequent surveys. Ruttledge (1994) does not include Clare Island in his review of the distribution of this goose in Galway and Mayo, nor was it detected in the most recent atlas survey (Balmer et al. 2013). Therefore, it appears that it may have departed from Clare Island as a regular visitor sometime between 1984 and 1988.
However, a flock of 13 was found on Kinatevdilla on 27 January 2006 and a flock of 40 was also found on the island by Malachy Mangan on 16 March 2018 (www.Irishbirding.com). A flock of about 25 birds was seen at Tore More in the spring of 2018 (PW). Patsy Winters believes that it is a regular winter visitor in small numbers, favouring one field in Tore More where it could easily be overlooked.
The absence of regular grazing geese from Clare Island is interesting as obligate herbivorous bird species generally, in terms of biomass, form a very small percentage of the estimated total of breeding land birds on the island (see Chapter 4). The very large increase in sheep numbers may be, at least, a partial explanation, though equally, in the case of geese, grazing could enable more efficient foraging by these birds.
Image credits: R.T. Mills