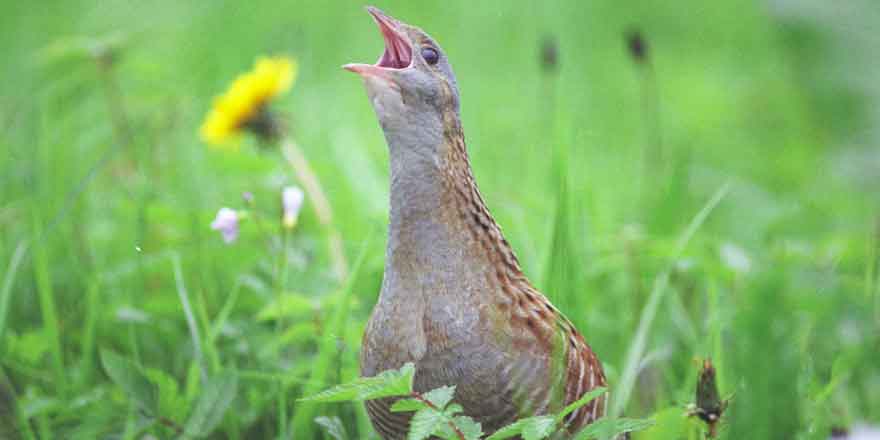 Today, you can read the entry on the Corncrake as it appears in Chapter Two of New Survery of Clare Island, vol. 9: Birds. Chapter Two contains an inventory of the birds of Clare Island, and this is compared with the findings of the first survey conducted during 1909–11. The list comprises records that span the period from 1887 to 2018.

Corncrake Crex crex (Linnaeus)
Migrant; formerly bred but now apparently extinct on Clare Island; still a rare vagrant.
Although a corncrake was seen in 2004, this migrant species is now apparently extinct as a breeding species on Clare Island (Winters 2006). It was ‘very common’ at one time (Ussher 1912), but the corncrake underwent a major decline in Mayo—particularly between 1988 and 1993— as detailed in Ruttledge’s (1994 and references therein) comprehensive review. The corncrake was found to be breeding in the 1968 to 1972 atlas survey (Sharrock 1976) but was not noted by Lloyd (1984) who thought that it had been ‘lost’ since 1945; Sharrock (1976) was not cited. The corncrake was not found during the 1988–91 atlas survey (Gibbons et al. 1993) nor during that of 2007–11 (Balmer et al. 2013), although one was heard on Clare Island in June 2017 (PW).
Interestingly, it appears that the corncrake remained breeding on Inishbofin (c. 25 km southwest of Clare Island) for considerably longer, and in larger numbers, than it did on Clare Island, despite the population collapse in County Galway being much steeper than that in Mayo (Ruttledge 1994).
Image credits: R.T. Mills