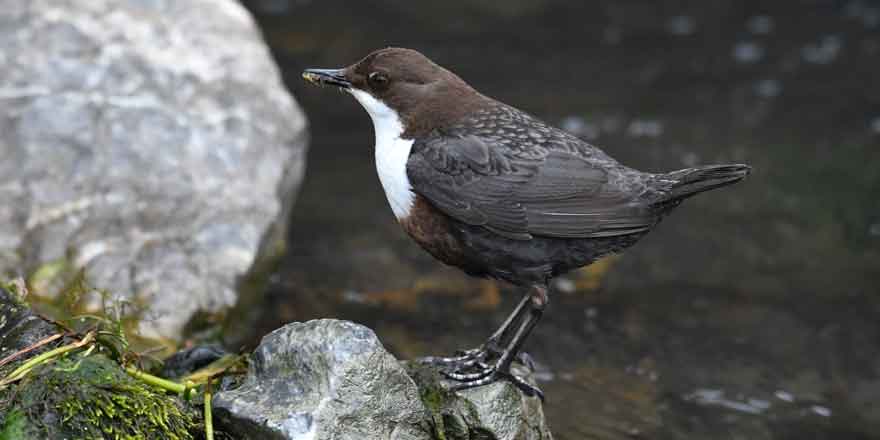 On Day 6 of Heritage Week we learn about a very rare occasional visitor on Clare Island, featuring in New Survey of Clare Island, vol. 9: Birds.

Today, you can read the entry on the Dipper as it appears in Chapter Two of New Survery of Clare Island, vol. 9: Birds. Chapter Two contains an inventory of the birds of Clare Island, and this is compared with the findings of the first survey conducted during 1909–11. The list comprises records that span the period from 1887 to 2018.

Dipper Cinclus cinclus (Linnaeus)
Extinct as a breeding species; very rare occasional visitor.
The subspecies Cinclus cinclus hibernicus Hartert is the taxon involved, making it the only endemic Irish subspecies to be found on Clare Island (Ussher 1912; Ruttledge 1950), and whose breeding biology is well described (Smiddy et al. 1995).
The dipper was found to be breeding on Clare Island in the 1909–11 survey, during which several specimens were obtained for comparison with museum skins (Ussher 1912). However, the dipper was not seen again until 14–18 June 1989 when one individual was found (D’Arcy 1992; Ruttledge 1994). The dipper was not detected in any of the atlas surveys or those of Barlee and Ruttledge (1945), Lloyd (1984) or Winters (2006), although one was seen by John Feehan in November 2017. One wonders whether the collecting of specimens during 1909–11 contributed to their extinction.
Image credits: R.T. Mills