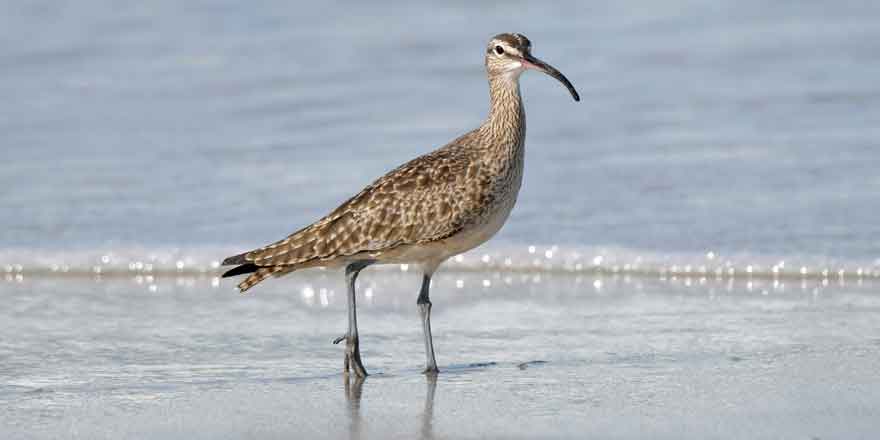 On Day 3 of Heritage Week we introduce a typical spring and autumn passage migrant featuring in New Survey of Clare Island, vol. 9: Birds.

Today, you can read the entry on the Eurasian Whimbrel as it appears in Chapter Two of New Survery of Clare Island, vol. 9: Birds. Chapter Two contains an inventory of the birds of Clare Island, and this is compared with the findings of the first survey conducted during 1909–11. The list comprises records that span the period from 1887 to 2018.

Eurasian Whimbrel Numenius phaeopus (Linnaeus)
Passage migrant in spring and autumn.
This species is a typical spring and autumn passage migrant with perhaps more birds in the spring than during the return migration in the autumn (Ussher 1912; Hutchinson 1989; Ruttledge 1994; see also Alves et al. 2016). In the current survey birds were seen in late April 2000, May 2001, late August 2002 and early September 2005; whimbrels were not seen during the mid-June survey of 2013 (Coombes unpublished data; Kelly unpublished data). The whimbrel was not recorded during any of the atlas surveys (Sharrock 1976; Lack 1986; Gibbons et al. 1993; Balmer et al. 2013).
In recent surveys the maximum number seen was 15 on 29 April 2000 (Coombes unpublished data). However, McGeehan (2018) shows a very large flock (by known Clare Island standards) of ≥ 21 birds which he photographed on 18 May 2014. It appears that during very heavy rain, and poor visibility, large numbers of whimbrels interrupted their journey northwards and ‘sat out’ the difficult conditions until the storm passed (McGeehan 2018).
On 3 September 2005 three whimbrels (two adults and a juvenile) were seen foraging in the littoral at Kinincorra, effectively a very small storm beach with perfectly rounded ‘boulders’ (9–22cm in diameter) closely grouped together like billiard balls. The adult whimbrels, but not the juvenile, were systematically and elegantly searching for prey under the cobbles, their decurved bill being perfectly adapted to exploiting this habitat; each whimbrel would slide its bill down the curved side of the cobble and probe the soft substrate underneath. A small crab was one identified prey item thus captured.
Image credits: R.T. Mills