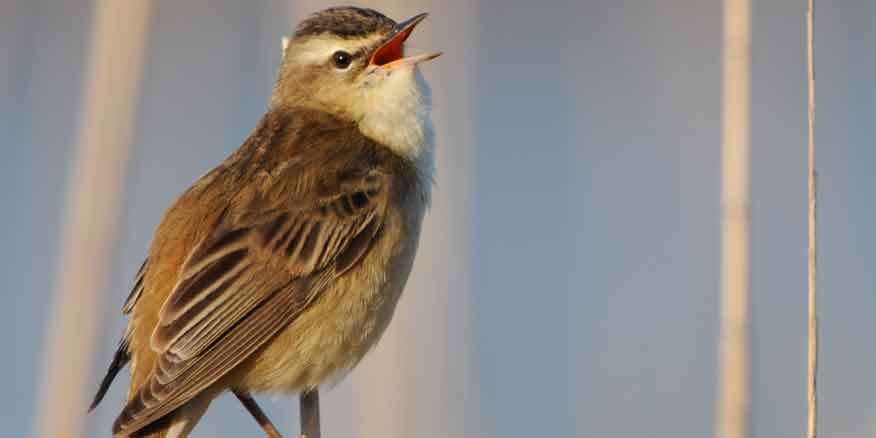 On Day 5 of Heritage Week we introduce a migrant bird breeding only at two locations on Clare Island, featuring in New Survey of Clare Island, vol. 9: Birds.

Today, you can read the entry on the Sedge Warbler as it appears in Chapter Two of New Survery of Clare Island, vol. 9: Birds. Chapter Two contains an inventory of the birds of Clare Island, and this is compared with the findings of the first survey conducted during 1909–11. The list comprises records that span the period from 1887 to 2018.

Sedge Warbler Acrocephalus schoenobaenus (Linnaeus)
Migrant; breeds, but only at two locations.
‘Repeatedly identified in marshy ground near Clare Island harbour in June, 1910, and July, 1911’ (Ussher 1912), as it is today (e.g. Coombes unpublished data; Kelly unpublished data; D’Arcy 1992; Forsyth and Allen 1997; Winters 2006; Balmer et al. 2013). Interestingly, the sedge warbler was not reported by Barlee and Ruttledge (1945) or by Lloyd (1984), leading the latter to conclude that the species had become extinct in the 1911–45 period. However, it is at least possible that Barlee and Ruttledge’s (1945) visit was too early to detect this migrant species and Ruttledge (1950) even expressed doubt about Ussher’s conclusion that it was breeding on Clare Island in 1910 and 1911.
The diagnostic ‘tchurr’ alarm call (Ferguson- Lees et al. 2011) has been heard on many occasions including 13 July 2003, and an adult was seen carrying food on 15 July 2000; one was seen on 25 August 2002 (Kelly unpublished data) (see Chapters 4, 6 and 7; Balmer et al. 2013). Sedge warblers were recorded at two locations in 2016: on 28 May (James Kilroy) and 10 June (Dr Líam Lysaght) respectively.
Image credits: R.T. Mills