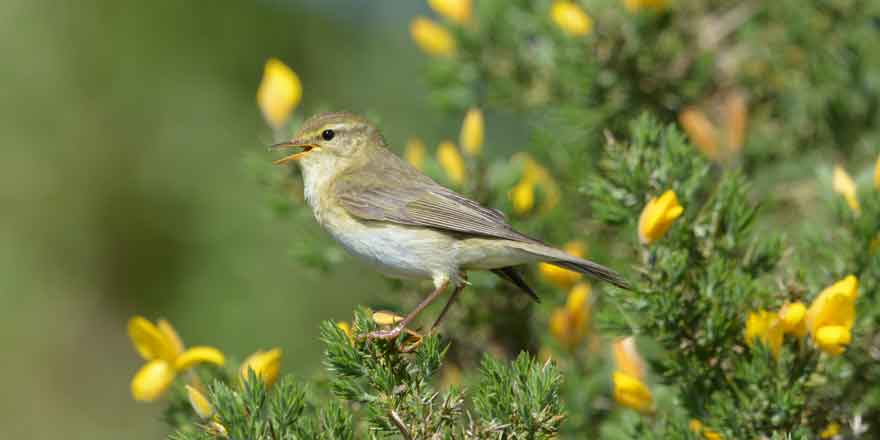 On Day 4 of Heritage Week we learn about a well-established breeding species on Clare Island, which features in New Survey of Clare Island, vol. 9: Birds.

Today, you can read the entry on the Willow Warbler as it appears in Chapter Two of New Survery of Clare Island, vol. 9: Birds. Chapter Two contains an inventory of the birds of Clare Island, and this is compared with the findings of the first survey conducted during 1909–11. The list comprises records that span the period from 1887 to 2018.

Willow Warbler Phylloscopus trochilus (Linnaeus)
Migrant; breeds.
Although ‘not observed on Clare Island’ (Ussher 1912), this warbler is now a well-established breeding species, having been first discovered there by Ian Forsyth and Pamela Allen in 1996 when ‘three breeding territories were identified and another five in 1997’ (Forsyth and Allen 1997). Subsequent surveys showed breeding willow warblers in both L68 and L78 (Winters 2006) (see Chapter 4). However, it appears that no breeding pairs were observed in L68 during the most recent atlas survey (Balmer et al. 2013).
A willow warbler—a well-known single brooded species—Evans et al. (2009), was seen carrying food on Clare Island on 14 July 2000 (Kelly pers. obs.), which may indicate some pairs here are double-brooded. The willow warbler, which is six times more abundant than the chiffchaff in Ireland (Crowe et al. 2014), has recently undergone a marked increase in the west and north-west of the country (Crowe et al. 2010; Balmer et al. 2013).
Image credits: R.T. Mills