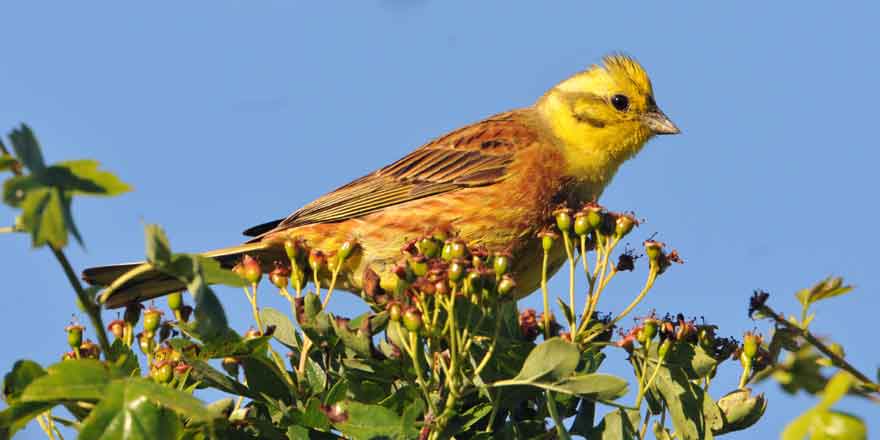 On Day 8 of Heritage Week we introduce a species that is now extinct on Clare Island, featuring in New Survey of Clare Island, vol. 9: Birds.

Today, you can read the entry on the Yellowhammer as it appears in Chapter Two of New Survery of Clare Island, vol. 9: Birds. Chapter Two contains an inventory of the birds of Clare Island, and this is compared with the findings of the first survey conducted during 1909–11. The list comprises records that span the period from 1887 to 2018.

Yellowhammer Emberiza citrinella Linnaeus
Once abundant; this species is now extinct on Clare Island.
Ussher (1912) described the yellowhammer as ‘one of our commonest resident birds’ and was present ‘all over Clare Island from March to September’. However, by April 1945 only three were found by Barlee and Ruttledge (1945). None has been seen since. The yellowhammer has also disappeared from other Irish islands including Cape Clear and Rathlin Island (Ruttledge 1966; Hutchinson 1989; Kelly unpublished data). These changes in the status of insular species—as well as ‘northern and western Ireland over the last 40 years’—are probably due to the ‘almost complete loss of arable farming’ (Balmer et al. 2013).
Image credits: R.T. Mills