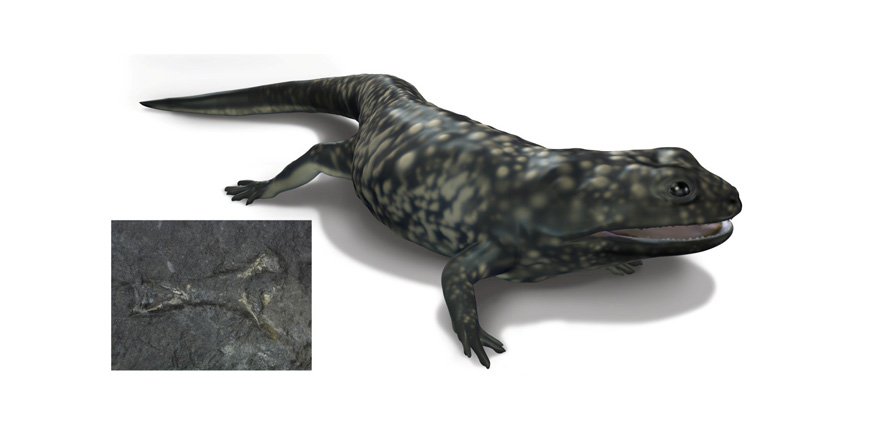 The fossilised bones of a tiny amphibian-like creature that scurried around the shores of County Clare 325 million years ago have been discovered.

The fossilised bones were discovered by Dr Eamon Doyle, geologist for the Burren and Cliffs of Moher UNESCO Global Geopark and Clare County Council. The two small bones have been described by Dr Doyle and fossil vertebrate researcher Aodhán Ó Gogáin of Trinity College Dublin in the latest volume of the Irish Journal of Earth Sciences, published by the Royal Irish Academy. The article is free to download here.

The 10mm-long bones come from a leg and possibly a hip bone from a small amphibian that would have been an ancestor to the first lizards which ultimately evolved into the dinosaurs 100 million years later. The amphibian lived during a geological time called the Carboniferous Period which lasted from 360 to 299 million years ago. This is an important period in the evolution of life as it is during this time that amphibians evolved from fish and first began to colonise the land. The fact that amphibian bones are rare finds in rocks of this age highlights the importance of Dr Doyle’s discovery.

The amphibian from Clare, which would fit in the palm of your hand, probably lived along a swampy coastline, either in an estuary or along rivers further inland and may have been washed out to sea during a storm or flood, the bones eventually settling onto the muddy seafloor where they were buried and turned to fossils.