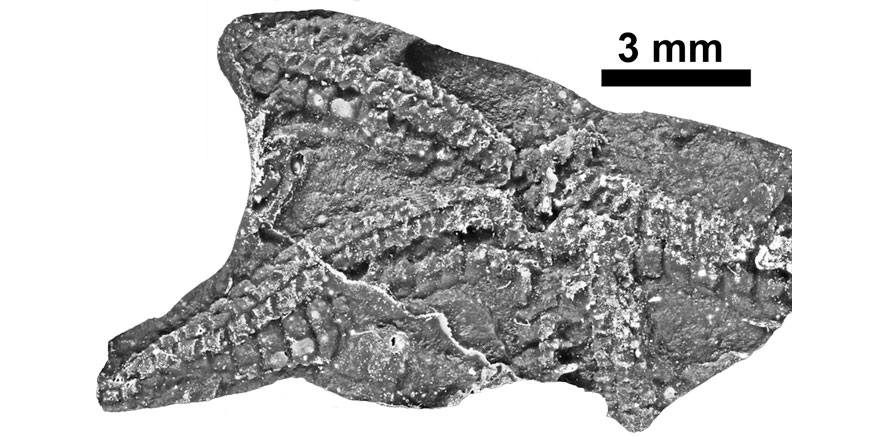 A new species of fossil starfish discovered in the Maam Valley of County Galway is described in the latest issue of the Irish Journal of Earth Sciences, published by the Royal Irish Academy.

The fossil has been named 'Crepidosoma doyleii' in honour of its discoverer Dr. Eamon Doyle, geologist for the Burren and Cliffs of Moher UNESCO Global Geopark and Clare County Council. The fossil specimens will soon be housed in the National Museum (Natural History) in Dublin.

The study by international researchers from the USA (Prof. Daniel B. Blake), the Netherlands (Prof. Stephen K. Donovan) and UK (Prof. David Harper) describes a new species of an ophiuroid starfish, commonly known as a 'brittle star'. Brittle stars first evolved around 500 million years ago and have survived relatively unchanged to the present day, although the ocean that was home to 'Crepidosoma doyleii' subsequently disappeared some 400 million years ago due to plate tectonic movements of the Earth's crust.

"The remote areas of the west of Ireland continue to yield some exceptional fossils which leave a significant impact on our understanding of the history of life. These new and unique specimens of fossil starfish from the Silurian rocks of Connemara are a key piece of evidence in the hunt for ancient life in the long vanished ocean that once covered Ireland, some 435 million years ago. We owe a great deal to the painstaking efforts of Dr Eamon Doyle who meticulously combed these distant mountains for fossils during his PhD studies at what was then University College Galway (now NUI Galway). A renewed interest in the migration of animals into deeper water during this early, but crucial phase of earth's history prompted a re-examination of many of lesser-known localities from the Silurian time period. The remote areas of western Ireland are less well known than they should be!"

"This discovery by Dr. Doyle in the area of the Joyce Country, which is an aspiring Geopark, highlights the real need to protect our geological heritage and underlines why the Geological Survey firmly supports the UNESCO Geopark program in Ireland."

"I am delighted with the honour afforded to me by these eminent and internationally respected palaeontologists. I wish to thank Clare County Council and the Geological Survey for their support and I look forward to presenting some new fossils from the Burren and Cliffs of Moher UNESCO Global Geopark in the near future."