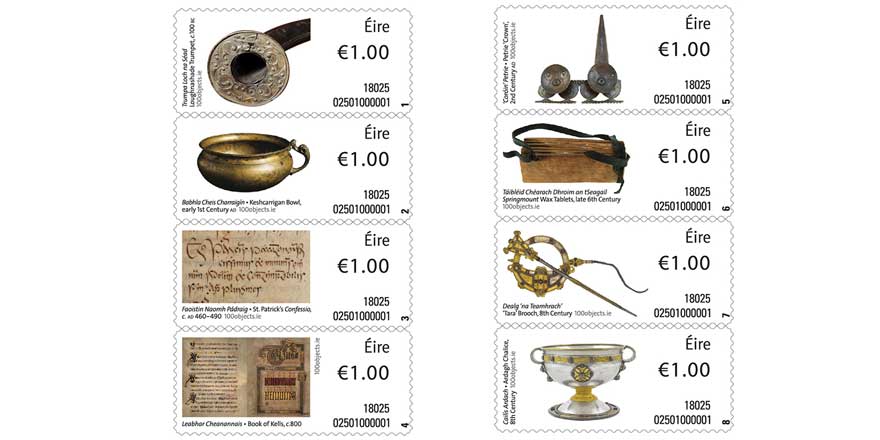 Ireland’s latest definitive stamps will bring some of the nation’s most loved antiquities to a new audience.

Definite stamps are Ireland’s ‘everyday’ stamps that remain on sale for a number of years. This, the new edition of Ireland’s ninth definitive series, features some of the nation’s best known antiquities including the Ardagh Chalice, the Tara Brooch, and the Book of Kells.

The stamps are the second phase of the series, ‘A History of Ireland in 100 Objects, a selection’, unveiled at the National Museum in 2017. The project marks a partnership between The National Museum of Ireland, The Irish Times, The Royal Irish Academy and An Post. The series is supported by the website 100objects.ie.

The definitive series is based on Fintan O’Toole’s book, A History of Ireland in 100 Objects, with each object opening a window into an important moment in Irish history between 5000BC and the early 21st Century. Images of further ‘100 Objects’ tracing Ireland’s history will be issued on stamps over the next five years.

The eight stamps, first day cover envelopes and booklets were designed by leading Dublin-based designers, Zinc Design Consultants.  They are available at all Post Offices and online at irishstamps.ie