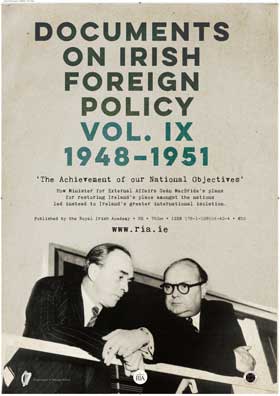 31 January 2015
DIFP is now in a ‘research year’ for DIFP volume X. This volume will run from 1951 to 1957 and so take in the 1951-4 Fianna Fáil government with Frank Aiken in his first term as Minister and the 1954-7 Second Inter-Party Government when Liam Cosgrave was Minister.

In January we prioritized the files the DFA files we needed for the new volume and began work on the A, P and PS Series Secretaries files. By the end of the month we were moving on to Confidential Reports (CR) files from overseas missions and had a good haul of material for the volume.