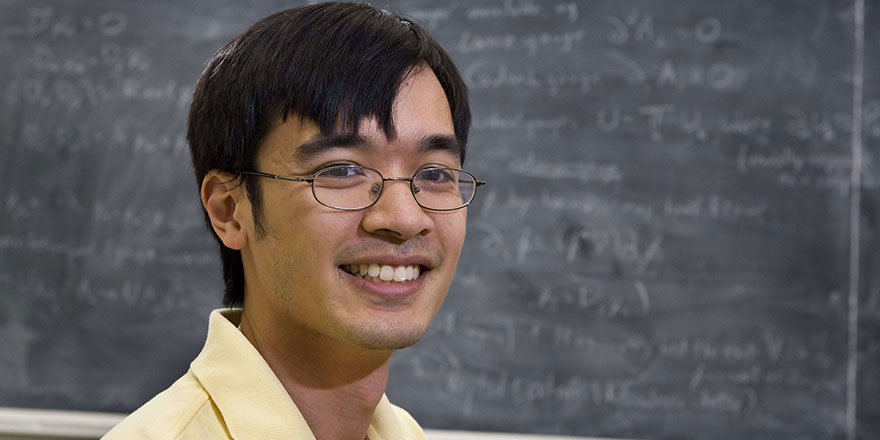 In his lecture, Fields Medalist Terence Tao demonstrates how distances to other celestial bodies can be accurately ‘measured’ by applying simple secondary school mathematics to basic available measurements or observations. As he helps us climb each rung of the ladder, from the distance to the moon, to the sun, to other planets, and to distant galaxies, he also tells the story of mathematics in astronomy going back 3000 years, starting with how the ancient Greeks worked out that the Earth was round, and taking us right through to how scientists today are able to map all of the observable universe.

Tao recently announced that he is working on his first popular science book, which will expand upon the topic of this lecture, and share its title, The Cosmic Distance Ladder. Read more about the book and view a sample chapter on his personal blog

In a Q&A session moderated by Professor Pauline Mellon, UCD, Tao responded to questions from Ireland’s top mathematicians and members of the public. This first ever virtual Hamilton Lecture was attended by people from all over Ireland and around the world.

Tao, born in Adelaide, Australia in 1975, displayed a prodigious talent for mathematics from an early age and is considered one of the best mathematicians in the world today. He has been a professor of mathematics at UCLA since 1999, where he holds the James and Carol Collins chair in mathematics.  Tao's research spans an inordinate number of different fields and he has made major contributions in both pure and applied mathematics.

He has received numerous awards, most notably winning the Fields Medal in 2006 for his contributions to partial differential equations, combinatorics, harmonic analysis and additive number theory.

The top nine undergraduate mathematics students in Ireland were awarded the prestigious Hamilton Prize in an online ceremony hosted by the President of the Royal Irish Academy, Dr Mary Canning, to mark Hamilton Day.

On 20 October, Professor Tao delivered the Hamilton Masterclass. In this informal discussion, Tao shared his own experiences and opinions and gave advice on mathematical study, research, science communication, collaboration, and career development with the Hamilton Prize winners and PhD students from universities all around the island of Ireland. The discussion was moderated by Professor Steve Buckley MRIA, Chair of the Physical Chemical and Mathematical Sciences Committee.