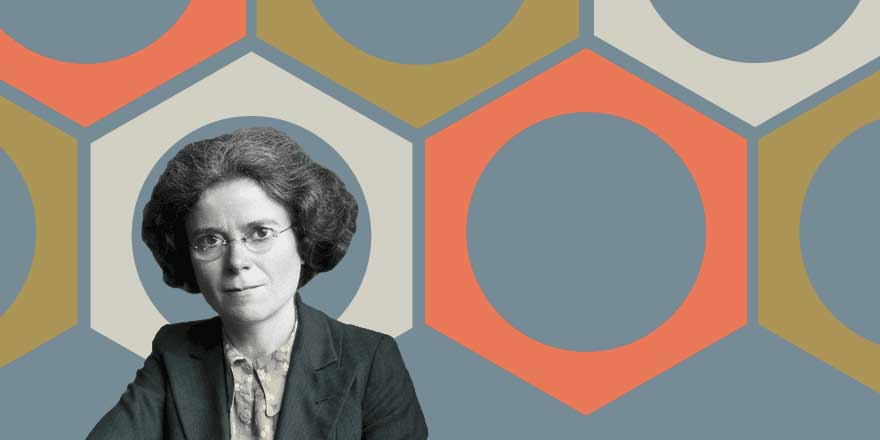 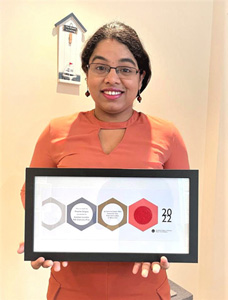 Dr Priyanka Ganguly is the winner of the Kathleen Lonsdale RIA Chemistry Prize 2022. The winner’s PhD research responded to two global challenges: sustainable energy production and environmental pollution from pharmaceutical effluent. Dr Ganguly aimed to develop new nanomaterials that could harness solar energy to produce hydrogen and to degrade environmental pollutants. The prestigious prize is awarded for outstanding doctoral research in the chemical sciences carried out on the island of Ireland. The award is named in honour of the famous Irish x-ray crystallographer, Kathleen Lonsdale.

Dr Ganguly made new materials by combing TiO2 (titanium dioxide) with ternary chalcogenides. TiO2 is a low-cost semiconductor material that is highly effective in photocatalytic applications but is typically not able to absorb visible light. The ternary chalcogenides show high visible light absorption but are less photocatalytically active than TiO2. By combining these two materials, Dr Ganguly hoped to make novel composite nanomaterials that allow absorption of light in the visible and near infrared range to catalyse reactions to produce hydrogen and degrade pollutants efficiently.

Dr Ganguly made four new composite nanomaterials and studied their structural, electronic and optical properties. When she tested their efficiency at photocatalytic efficiency, she found they illustrated higher efficiency at hydrogen production than the parent material. They also showed efficient photocatalytic antimicrobial disinfection and degradation of an antibiotic in water. She has shared her results in internationally renowned peer reviewed journals.

Reacting to the news of her selection as the winner, Dr Ganguly said:

"I am extremely delighted to be the awardee from such a prestigious institution. Being recognised with such awards helps you to gain confidence to do better in upcoming years. Moreover, challenging situations of pandemics have made me realise the importance of science we do and the progress that we make each day for a better future. It is an extremely humbling experience to be recognised by such a prestigious institution as the Royal Irish Academy, as it recognises all the hard work being done to date."

Dr Ganguly carried out her PhD research at Atlantic Technological University (formerly IT Sligo) under the supervision of Professor Suresh Pillai and Dr AiIish Breen. After completing her PhD Dr Ganguly took up a post as a Marie Curie Early-Stage Researcher at the University of Glasgow and is currently a Lecturer in Analytical Chemistry in the School of Human Sciences at London Metropolitan University.
Speaking at the ceremony Professor Catherine Godson, Science Secretary of the Royal Irish Academy said:

‘This years' Kathleen Lonsdale Prize applicants representing Universities/ Institutes across Ireland have been of an extremely high standard. To have such a high calibre of applicants following what has been a very disruptive time in their postgraduate research due to the pandemic, displays resilience and determination of both the Researchers and their Supervisors. The applicants demonstrated how their research aims to address global challenges and dissemination of the outputs in such high impact journals and scientific fora demonstrates Ireland as being world class in Chemical Sciences research.’

‘We in Henkel Ireland are delighted to continue our association with the Kathleen Lonsdale RIA Chemistry Prize.  The Research environment in Ireland is very important to us and this is a meaningful way to give support and encouragement to young researchers.’