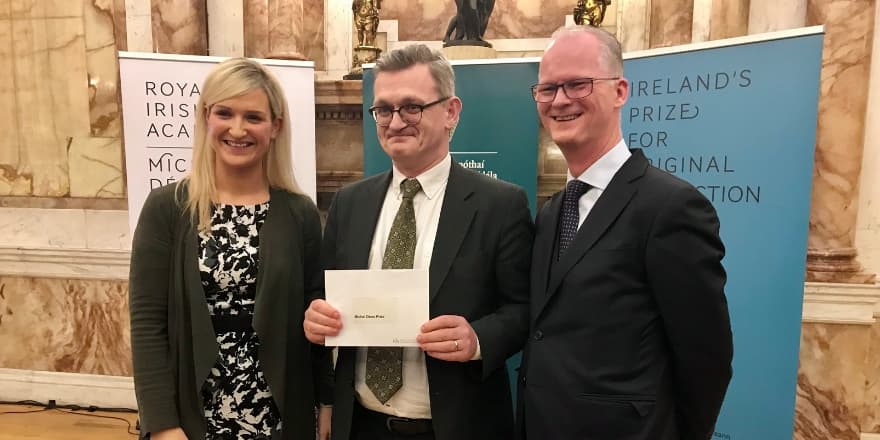 The Royal Irish Academy (RIA) last night at a ceremony in Iveagh House announced the winner of the inaugural Michel Déon Prize for non-fiction as Breandán Mac Suibhne for his book The End of Outrage: Post-Famine Adjustment in Rural Ireland (Oxford University Press).

Breandán Mac Suibhne is a historian of modern Ireland (PhD, Carnegie Mellon) and is a fellow of the Moore Institute for the Humanities in the National University of Ireland, Galway. His publications include, with David Dickson, The Outer Edge of Ulster (2000), an annotated edition of the longest lower-class account of Ireland's Great Famine. He was born in the community that is the focus of The End of Outrage, making it a particularly intimate and absorbing history of a small place in a time of great change.

“We were absolutely delighted with the calibre of entries for this inaugural prize and feel that Breandán is a very worthy winner and one that Michel Déon would be proud of. The judges felt that ‘The End of Outrage’ was a beautifully written, well told, compelling narrative and a very interesting way to look at a period of history. We would also like to commend and congratulate the other shortlisted authors who set the bar incredibly high – Ruth Fitzmaurice, Robert Gerwarth, Darach MacDonald, Vincent Morley and Emilie Pine.”

“I would like to join in congratulating Breandán Mac Suibhne and all of the shortlisted authors.  The Michel Déon Prize supports modern writers of non-fiction and new artists who seek to develop and strengthen their cultural work. I am delighted that the Department of Foreign Affairs and Trade has funded this prize, and I look forward to it growing as a key moment in our shared cultural calendar.”

Michel Deon had a remarkable talent. He was widely regarded as one of the most innovative and reflective French writers of the twentieth century who lived in Ireland from the 1970s until his death in 2016. He published over 50 works of fiction and non-fiction and was the recipient of numerous awards, including the Prix Interallié for his 1970 novel, Les Poneys sauvages (The Wild Ponies). Déon's 1973 novel Un taxi mauve received the Grand Prix du roman de l'Académie française and in 1978 he was elected to the Académie française

The €10,000 prize for the winning author is funded by the Department of Foreign Affairs. Breandán will also get the opportunity to give ‘The Michel Déon Lecture’ in France in early 2019.