‘If the remote islands off the west coast could be thought of as microcosms of the larger island, Ireland itself could be imagined as Gaelic, preindustrial, heroic and a repository of older and purer values. The Aran Islands functioned in this way, not least through the impact of Robert Flaherty’s 1934 film Man of Aran.’

Catch up on the full Modern Ireland in 100 Artworks series.

According to the article’s authors Fintan O’Toole and Máirín Nic Eoin, ‘If the remote islands off the west coast could be thought of as microcosms of the larger island, Ireland itself could be imagined as Gaelic, preindustrial, heroic and a repository of older and purer values. The Aran Islands functioned in this way, not least through the impact of Robert Flaherty’s 1934 film Man of Aran.’

Read about the author from his entry in the Dictionary of Irish Biography.

Ó Criomhthain,Tomás (1854/5–1937), author, was born on the Great Blasket Island, Co. Kerry, youngest child among three sons and five daughters of Dónall Mac Criomhthain and Cáit Ní Shé (m. 26 January 1837). He lived all his life on the island, with visits to Dún Chaoin and Daingean Uí Chúise on the mainland for provisions, medical assistance, religious services, market days, and visits with friends and kinsfolk.

He received some formal education, but no tuition in his native language, at the national school established on the island in 1864. In later years, and by his own efforts, he acquired the ability to read and write Irish, with the assistance of relatives on the mainland and of visitors to the island. These visitors included workers in the language movement as well as scholars such as Carl Marstrander (qv), who visited in 1907, and Robin Flower (qv), who first came in 1910 and returned frequently thereafter. Some of these scholars and visitors received instruction in the Irish language from Tomás and in turn encouraged him to develop his literary skills.

His first writings, collected in Bloghanna ón mBlascaod (1997), appeared in journals such as An Claidheamh Soluis, An Lóchrann, and Fáinne an Lae. Subsequently, and due principally to the persuasion of Brian Ó Ceallaigh (qv), a TCD graduate in languages, history, and law, and a student of Irish who first came to the island in 1917, Tomás began the two works for which he is best known: Allagar na hInise (1928, 1977, 1999 eds), which is based on daily accounts of life on the Great Blasket, and An tOileánach (1929, 1973, 2002 eds), his autobiography. The Allagar contains outstanding examples of lively dialogue between islanders and of individual characters within the island community, and vivid descriptions of the powers of nature, against which the isolated population had little protection. An tOileánach is a unique personal record of one man's life from within this close community, a life dominated by the sea and illuminated by a sense of irony, humour, and drama.

These books give a vivid insider picture of the lives of the islanders seen from the perspective of a shrewd and perceptive observer. His mastery of the written language and of the resources of the language itself, and his skills in the oral traditions of scéalaíocht and seanchas, bring an additional poetic and literary quality to the sociological importance of Ó Criomhthain's accounts. The abandonment of the Great Blasket in 1953–4 lends an increased historical importance to these works.

The publication of An tOileánach, in particular, had a significant and lasting effect on writing in Irish. Other islanders issued their own autobiographical accounts, notably Muiris Ó Súilleabháin (qv) in 1933 and Peig Sayers (qv) in 1936, and this genre became one of the successes of modern literature in the language. In addition, some classical scholars (e.g. George Thomson (qv) and J. V. Luce) have posited interesting analogies between the life described in these autobiographies and accounts of Ionian culture as recounted by Homer in the Iliad and the Odyssey.

Ó Criomhthain's other published work includes Seanchas ón Oileán Tiar (1956) a selection of folklore collected from Tomás by Robin Flower between 1912 and 1925, and a topographical account of the Blasket islands, Dinnseanchas na mBlascaodaí (1935, 1999 eds). Flower's translation of An tOileánach, The Islandman, appeared in 1934. Ó Criomhthain died at 7.00 a.m. on Sunday 7 March 1937, in his own house on the island. 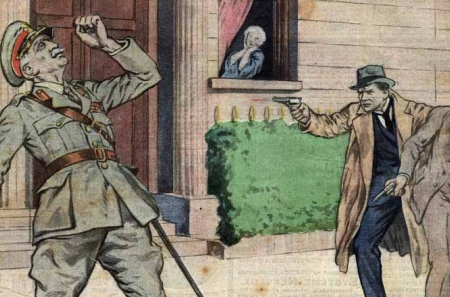