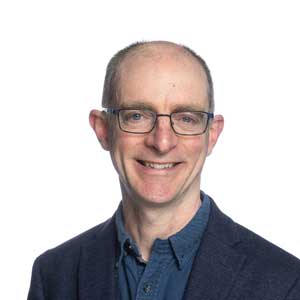 Dr. Paul Leahy is Lecturer in Wind Energy at University College Cork, Funded Investigator at the SFI MAREI Centre for Energy, Climate and Marine Research and an Affiliate PI of the Environmental Research Institute, UCC. He holds a B.E. from UCC (Electrical Engineering, 1995) and a PhD in Plasma Diagnostics for Fusion Energy (UCC and Culham Centre for Fusion Energy, 2001).
He has worked as a consultant in mobile telecommunications in Ireland and the United Kingdom and returned to academia in 2004 to take up a postdoctoral position with the Hydromet research group in UCC. There, he worked on several environmental research projects including measuring and modelling greenhouse gas emissions from grasslands and peatlands and predicting impacts of extreme weather events.
He was appointed SFI Stokes Lecturer in Wind Energy in 2009. Dr. Leahy leads a multidisciplinary research team investigating topics in wind energy, energy storage and climate change. He is a Principal Investigator of the US-Ireland Re-Wind circular economy project which facilitates environmental, social and business integration of end-of-life wind turbine blade repurposing solutions. He also leads the H:Wind industry-academic collaborative project on offshore wind to hydrogen conversion. Other projects include predicting future deficits in fodder production in Irish agriculture under climate change scenarios, and measurement of greenhouse gas emissions from a revegetated former cutaway bog. He is Senior Editor of Renewable & Sustainable Energy Reviews, an international peer-reviewed journal which presents novel ideas and technologies to support sustainable development and the transition to a low-carbon future.