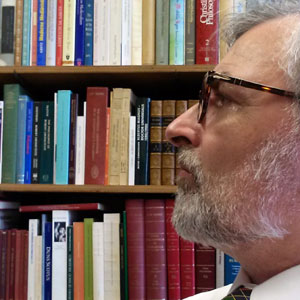 A native of Germany, Philipp W. Rosemann holds advanced degrees from the Queen's University of Belfast (MA) and from the Université catholique de Louvain (Lic.Phil. and D.Phil.). His dissertation director was the well-known Irish scholar James McEvoy. Prof. Rosemann joined Maynooth University in January, 2018, after twenty years of teaching and research at the University of Dallas.

Rosemann’s scholarly interests are situated at the intersection of the Western Christian tradition and contemporary thought. His doctoral dissertation, which was devoted to the metaphysics of Thomas Aquinas, already carried a Heideggerian subtitle: A 'Repetition' of Scholastic Metaphysics. This was followed by a French book that looked at Aquinas through a Lacanian lens, and then by an attempt to sketch out a Foucauldian methodology for the study of Scholastic thought: Understanding Scholastic Thought with Foucault.

Over the last decade, Rosemann spent much time on research concerning Peter Lombard, the author of the celebrated Book of Sentences, which over several centuries served as the standard textbook of theology. Thus, his work took a more 'theological turn'. In particular, he approached the Book of Sentences as a powerful case illustrating how traditional rationality unfolds in the interpretation of texts.

Rosemann’s current work fuses these post-modern and theological strands. It is concerned with the relationship between tradition and transgression, the latter understood etymologically as a 'stepping across' and challenging of boundaries. His new book on this topic carries a title that is inspired by Foucault: Charred Root of Meaning: Continuity, Transgression, and the Other in Christian Tradition (Grand Rapids: Eerdmans, 2018).
Rosemann is also the founding editor, and now co-editor, of the series 'Dallas Medieval Texts and Translations'.