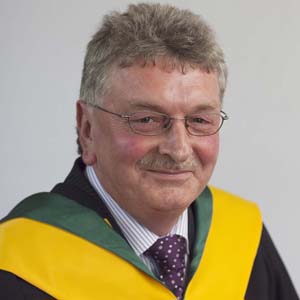 Damian McManus is Professor of Early Irish in Trinity College, Dublin, and Head of the Department of Irish. He is a graduate of the University of Dublin (BA 1977), where he also completed his doctorate on 'The Latin loanwords in Early Irish' in 1982. He is an Alexander von Humboldt Foundation Fellow, a Fellow of Trinity College and Member of the Royal Irish Academy. His main areas of research are Primitive Irish, in particular the Latin loanwords and the Ogam alphabet, and Classical Modern Irish. He is author of A guide to Ogam, joint editor of Stair na Gaeilge, and has published many articles in learned journals in Celtic Studies. He was director of the Trinity-based 'Bardic Project', which published five hundred medieval Irish poems from manuscripts in Irish and British libraries (A Bardic miscellany, eds D. McManus and E. Ó Raghallaigh, 2010), and created a database of two thousand such poems (https://www.tcd.ie/Irish/database/). He has also been joint editor of Ériu, the journal of the Royal Irish Academy devoted to Irish philology and literature, since 2005.