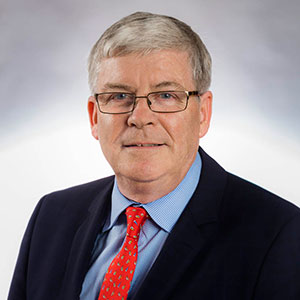 Raghnall Ó Floinn holds a BA (1974) in Archaeology and Geography and an MA (1976) in Celtic Archaeology from University College Dublin.
He joined the Irish Antiquities Division of the National Museum of Ireland in 1976 and is a former Head of Collections (2003-2013) and Director (2013-2018) of that institution. He was elected as a Fellow of the Society of Antiquaries of London in 1996 and as a Member of the Royal Irish Academy in 2005. He was a member of the RIA/NMI Dublin Excavations Publication Board, 1997- 2018; the RIA’s Advisory Board, Medieval Art & Architecture of Ireland 400-1600, 2008-2014 and the RIA’s Excavations at Knowth Editorial Board, 2016-2022. He is a member of the RIA PL&A Advisory Committee for the Assessment of Candidates for Membership, 2019 - .
Research interests:
Medieval Ireland and Europe with a particular focus on reliquaries and the cult of relics; popular religion; decorated metalwork and the archaeology of the medieval Irish Church. Antiquarians and the history of collections.

Publications
He has lectured widely and is the author of numerous papers. He has edited a number of books, including Ireland and Scandinavia in the Early Viking Age (1998), Treasures of the National Museum of Ireland – Irish Antiquities (2002); Franciscan Faith – Sacred Metalwork in Ireland 1600-1750 (2011) and most recently, co-authored a monograph entitled Viking Graves and Grave-Goods which appeared as part of the National Museum’s Dublin Excavations Series in 2015.