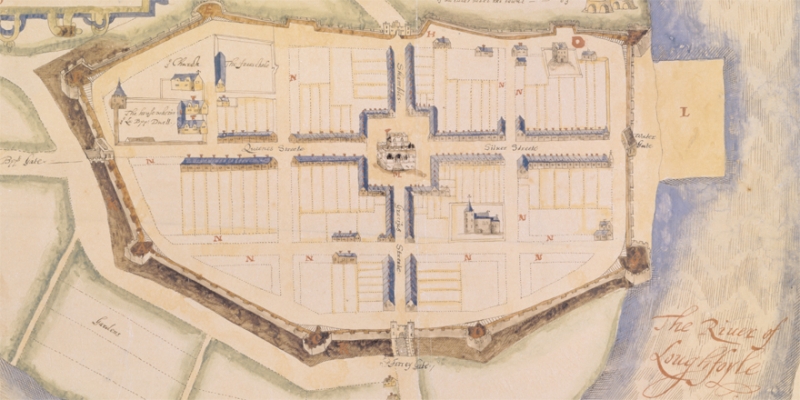 Raymond Gillespie on the 'Early Modern, Gaelic and Plantation town'

The fourth in the series is on the early modern, Gaelic and plantation towns by Raymond Gillespie, Chairman of the IHTA Board and author with Stephen A. Royle of no. 12 Belfast, part I, to 1840 (Royal Irish Academy, Dublin, 2003) and with Harold O'Sullivan of no. 23 Carlingford (Royal Irish Academy, Dublin 2011). In this essay, Gillespie discusses the different types of towns emerging in the early modern period.

The early modern period, roughly from 1500 to 1700, was characterised by a rapid rise in population and the emergence of a centralised state authority in Dublin to replace the diffused power structures of the Gaelic lordships. Both of these developments were conducive to the development of towns. Central authority needed a network of local agents and towns served as places where local government was based: proclamations were read out, inquisitions were taken and local courts met. An increasingly commercialised economy also needed market places for buying and selling and these were usually based in towns. 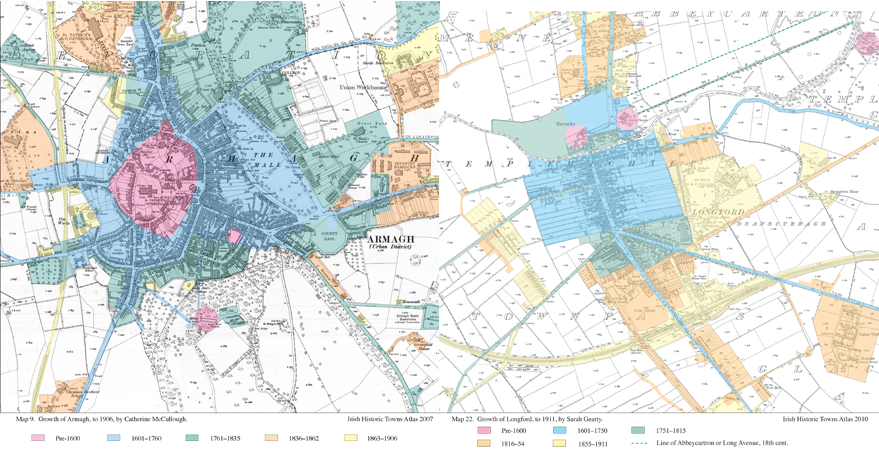 Growth map of Armagh and Longford (click for full maps)

Some new towns were formally organised as part of plantation schemes such as Armagh or Derry-Londonderry with regular street patterns but these were usually not on green-field sites but were located at older, often monastic, sites. This was particularly true of Derry~Londonderry, which became the model of an Irish planned town with its grid network of streets and its walls, built mainly for display rather than protection.

Other towns were not the product of formal plantation schemes, such as Belfast, Longford, and Bandon, but were nevertheless formal planned towns, usually taking that form through landlord initiatives.

View of Ennis by Thomas Dineley in 1681

Finally there were towns such as Ennis or Downpatrick, which had older histories but rose to prominence in the seventeenth century almost by accident as centres of royal administration and developed almost in a haphazard way. 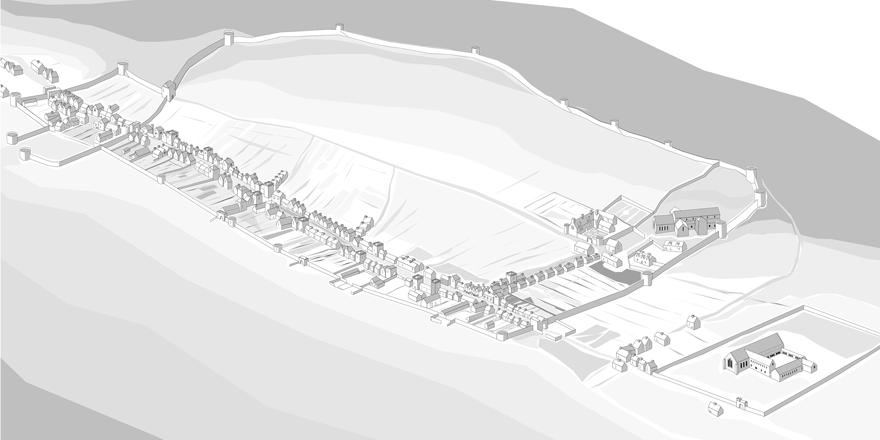 Conjectural drawing of Youghal in c. 1600

Indeed most of the older towns of Ireland, including Carrickfergus, Youghal, Dublin and Kildare, saw a quickening of urban life in the seventeenth century. Dublin as the capital of the emerging kingdom of Ireland saw a significant refurbishment of the urban fabric with an explosion of church building in the late seventeenth century and the construction of a new Tholsel and a refurbishment of Dublin Castle and the building of the Royal Hospital at Kilmainham. Other towns emulated this with many seeing the building of market houses or even town halls in the seventeenth century, reflecting the emergence of a corporate identity for these newly created settlements.

In Ulster, in particular, churches were often relocated from a rural setting into the local town. In such ways, what had been a mainly rural country in 1600 became, as a result of the colonial process, a more urbanised one with, as one Gaelic poet put it, the streets of the town replacing the openness of the chase.

To view and download the IHTA Online editions of towns of Bandon, Belfast, part I, to 1840, Derry-Londonderry, Longford or Ennis  click here.

Cover image: 'The Plat of the city of Londonderrie', 1622 by Thomas Raven (Public Record Office Northern Ireland). It appears as Map 9 in IHTA no. 15 Derry-Londonderry by Avril Thomas (Royal Irish Academy, Dublin, 2005).