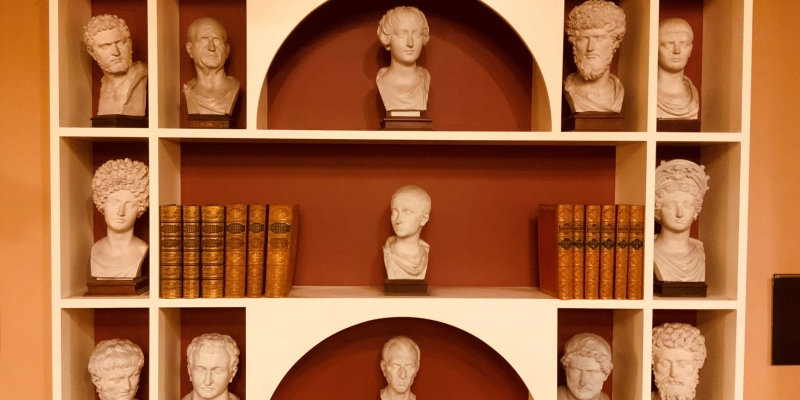 James Caulfeild, Lord Charlemont, MRIA (1728–99), travelled to Rome, circa 1750, as a wealthy young man. He was escorted by his tutor and companion Revd Edward Murphy (1707–77). While there, the men commissioned Simon Vierpyl (c.1725–1810), a London-born sculptor living in Rome, to make copies of Roman sculptures. Among the items commissioned by Murphy were busts of Roman emperors and others from the originals in the Capitoline Museum. The copies were made in terracotta over the following four years and were sent to Dublin in 1755. Vierpyl pointed out that the new series of sculptures of emperors he had created was ‘the only one of the kind now in the world’ (quoted in Strickland, 1913).

The task was a challenging one. Vierpyl observed that ‘it is probable in the highest degree that an equal series will never again be made; for I am certain that no eminent artist will hereafter stand four years, winter and summer (as I have done) in the chilling Capitoline museum to model so many busts and statues with his own hand ...’ (quoted in Strickland, 1913).

The room in the Capitoline museum in Rome where many of the original busts were displayed can still be seen. The display mounted in 1731 remained largely unchanged into the early twenty-first century.

Vierpyl came to Dublin, possibly in late 1756, at the invitation of Lord Charlemont. He oversaw various architectural projects in Dublin including the Casino at Marino, Marino House and Charlemont House, designed by William Chambers. He became involved in a variety of public projects in the city, was a member of the Guild of Carpenters, and occasionally chaired meetings of the Dublin Paving Board.

In the later eighteenth century the Roman sculptures Vierpyl had created were displayed in the library rooms at Lord Charlemont’s house in Dublin’s Rutland Square. The building is now occupied by the Hugh Lane Gallery of modern art, and the square has been renamed Parnell Square. The sculptures were presented to the Royal Irish Academy in 1868 by James Molyneux Caulfeild, third earl of Charlemont, MRIA.

The collection owned by the Royal Irish Academy now comprises 66 of the 78 busts that Murphy had commissioned in the 1750s. Each bust measures approximately 33 – 37 cm in height.

A selection of 13 busts is on display above the fireplace in the Meeting Room of the Academy.

The individuals from the classical world represented in the Academy collection of Vierpyl busts are:

[Proceedings of the] Corporation for paving the streets of Dublin (3 vols, Dublin, 1779-81)

The Casino at Marino (casinomarino.ie)