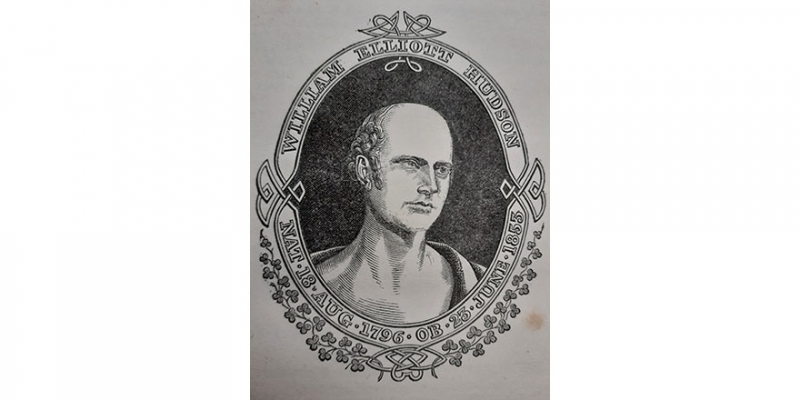 William Elliott Hudson (1796–1853) was born into a wealthy family that lived in Rathfarnham, County Dublin, in a house later used as St Enda’s school by Patrick H. Pearse. He graduated from Trinity College Dublin and later qualified as a barrister, but his passion was for Irish literature and antiquities

Hudson’s legal work took him to many parts of the country from his Dublin home at 39 Fitzwilliam Street Upper. He was elected a Member of the Royal Irish Academy in 1841, being recommended as ‘warmly attached to literary, antiquarian and scientific objects’ (RIA, MRIAC/42).

Hudson was a close associate of two Young Irelanders, Thomas Davis and Charles Gavan Duffy, and attended Irish classes along with them in the Royal Irish Academy in early 1845, taught by John O’Donovan. O’Donovan observed ‘My boys in the Irish class are too big to do any good and too busy to attend regularly’. It seems that the language classes were short-lived, but the leading attendees went on to establish the Celtic Society, as a cultural society with political interests, later in the same year (Murray, 2000).

Hudson had also been active in the Irish Archaeological Society, founded in 1840, and he was generous in providing funding from his own resources to support the publications and other activities of various mid-century cultural societies, including the Celtic Society. When John O’Daly published Laoithe Fiannuigheachta, or Fenian poems in 1859 on behalf of the Ossianic Society, he included an image of William Elliott Hudson on the title page and prefaced the volume with a ‘Biographical sketch of the late William Elliott Hudson’. (The image was derived from a photograph of the bust in the Academy.) Surviving correspondence indicates that John Windele, Owen Connellan and others valued Hudson’s influence when attempting to gain access to important Irish manuscripts such as the Book of Ballymote and the Book of Lecan in the Royal Irish Academy.

William Elliott Hudson bequeathed his library of some 800 books to the Academy together with his collection of eighteenth- and nineteenth-century Irish manuscripts. This large collection would have been acquired just as the Academy was preparing to move into its new library and museum built as an extension to a Georgian house at 19 Dawson Street in Dublin. The books and manuscripts were integrated into the main Academy collections rather than being kept as a separate collection.

A marble bust of William Elliott Hudson, sculpted by Christopher Moore, RHA, MRIA, was presented to the Academy in 1853 by his brothers. It is still displayed in the inner hall of Academy House.

The eighty manuscripts in the Irish language bequeathed by William Elliott Hudson are itemised below. Descriptive catalogue entries for each item have been printed in the Catalogue of Irish manuscripts in the Royal Irish Academy (28 fasc, Dublin: Royal Irish Academy, 1926–70), but the Hudson manuscripts are not identifiable through the index to that catalogue. Two manuscripts in English were also received: a collection of folk tales on fairy mythology and a miscellany mainly relating to the diocese of Down and Connor (his older brother was Dean of Down). A further collection of papers from William Elliott Hudson is preserved in RIA, MS 12 O 17. These comprise some letters to and from Hudson, a few folios of attempted translations of poetry, and some correspondence re state trials at Clonmel in 1848. The contents of MS 12 O 17 may be consulted on microfilm only (RIA, microfilm N.1146).

Hudson’s name features regularly in papers of some nineteenth-century antiquaries held by the Royal Irish Academy, including the extensive correspondence of John Windele and in the Graves Collection. The items from these antiquarian collections that relate to William Elliott Hudson may be identified through the RIA online catalogue of manuscripts.

23 A 5 (catalogue no. 221), a Catholic prayer book, penned by an inexperienced scribe

23 A 7 (catalogue no. 220), fragment of a Catholic prayer book, penned by Mícheál Óg Ó Longáin

23 A 38 (catalogue no. 365), a miscellany, religious and secular, penned by Éamon Ó Mathúna and Donnchadh Mac Carthaigh, early nineteenth-century

23 A 50 (catalogue no. 370), a collection of Irish verse, written on paper used for account books. Scribe not identified.

23 B 19 (catalogue no. 495), miscellany of Louth and South Ulster poetry, this MS was in the possession of Nicholas Kearney of Thomastown, Dundalk in 1837

23 G 45 (catalogue no. 920), Cath Fhochairte Bhrighide: text and translation of Battle of Fochart of St Brigid, penned by Nicholas Kearney

23 I 13 (catalogue no. 404), an Irish miscellany penned by David Mohir in 1729, including extracts from Geoffrey Keating’s Trí bior-ghaoithe an bháis

23 M 2 (catalogue no. 330), a collection of Ossianic verse, possibly in the hand of Nicholas Kearney. Watermark dated 1829 on some of the paper used

24 E 20 (catalogue no. 1262), letters (written in the late 1840s) by William Hackett, Nicholas Kearney and John Windele, on the subject of Irish mythology, mainly in English with short illustrative passages in Irish

Books and pamphlets received by the Academy in 1853 from Hudson’s bequest were dispersed through the Library, allowing them to form part of the Library’s core collection of academic works. A printed slip pasted inside the front cover identifies an item as being part of the Hudson bequest.

The collection reflects his academic and professional interests, and includes biography, history, law, classics, topography and travel, published between the sixteenth and nineteenth centuries. There were some works of theological controversy and canon law. Latin, English, French, Danish, Portuguese and Spanish are among the languages represented. Approximately 16 per cent of the collection was of Irish interest. Items with significant Irish language content included John Dowley’s Catechism (1663), Francis Molloy’s Grammatica Latino-Hibernica (1677), Andrew Donlevy’s Catechism (1742), and Matthew Kennedy’s Irish translation of the Spiritual Rose (1800). Printed works that echoed the content of his Irish manuscript collection, or the publishing interests of the learned societies he supported, included Charlotte Brooke, Reliques of Irish poetry (1789) and Edward Jones, Musical and poetical relicks of the Welsh bards (1794).